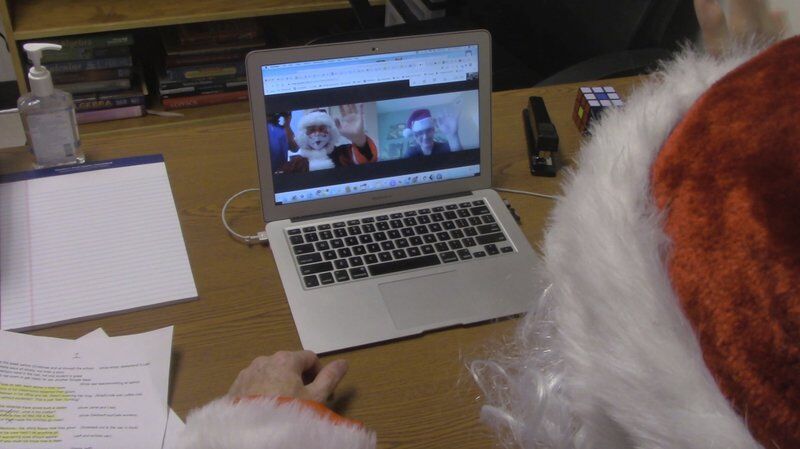 In this screenshot from Mohawk’s ‘Twas the Week Before Christmas’ video, Santa has an online visit with a student. 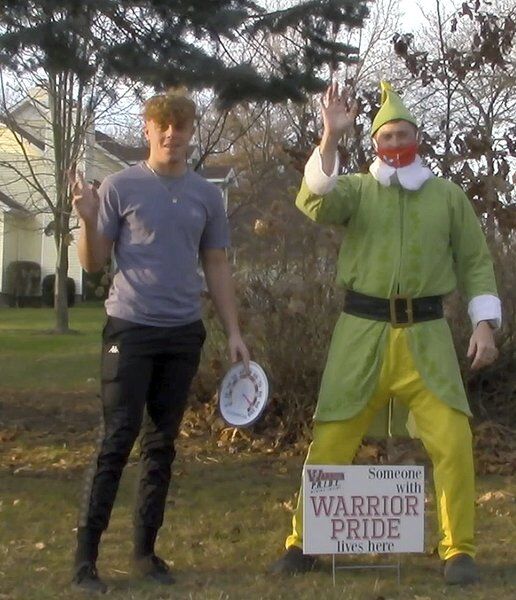 In this screenshot taken from a Mohawk PRIDE video, Travis Gabauer, left, a weekly winner, appears in the closing scene of an ‘Elf’ parody. Dressed as Buddy the Elf is Jeff McNeish. 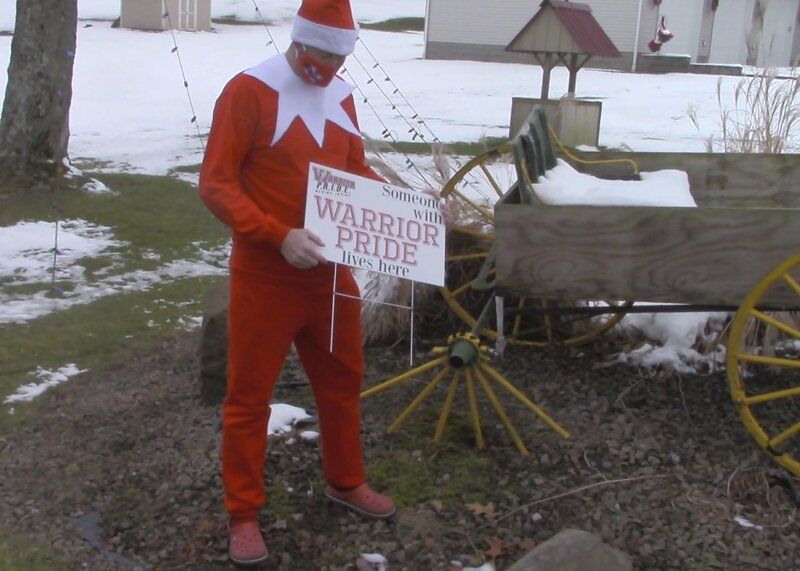 In this screenshot taken from a Mohawk PRIDE video, Jff McNeish -- a.k.a. the 'Elf on the Shelf' -- plants a yard sign at the home of weekly winner Jenna Lefebvre.

In this screenshot from Mohawk’s ‘Twas the Week Before Christmas’ video, Santa has an online visit with a student.

In this screenshot taken from a Mohawk PRIDE video, Travis Gabauer, left, a weekly winner, appears in the closing scene of an ‘Elf’ parody. Dressed as Buddy the Elf is Jeff McNeish.

In this screenshot taken from a Mohawk PRIDE video, Jff McNeish -- a.k.a. the 'Elf on the Shelf' -- plants a yard sign at the home of weekly winner Jenna Lefebvre.

And, frankly, he couldn’t blame them.

“In the 20 years I’ve been here,” he said, “it was boring. They were just saying them over the intercom. I know my class never paid attention. I’d give them bonus points questions — ‘Hey, what’s the lunch for today?’ They just said it, and nobody would know.”

Thus, McNeish approached the administration about doing the announcements visually.

He got the job.

“Now we do video announcements, and they remember it,” he said. “I think if you see it, hear it, it makes a big difference.”

Eventually, it would also make a big difference in the Mohawk PRIDE program, an initiative the school launched about four years ago to recognize and reward students who modeled behavior identified by the acronym: Personal responsibility, Respect, Integrity, Determination and Enthusiasm.

When identified as having upheld one or more of these characteristics inside or outside of school, students received Warrior Pride tickets that could be redeemed for their choice of an item from the PRIDE reward chest. Honorees also would be given a random number to be posted on a bingo board, and when the board sported 10 numbers in a row, those 10 students would receive a larger prize.

This year, McNeish’s morning announcements were enlisted as an additional component.

“Lisa (Caughey, learning support teacher) came to me and said, ‘Is there a way we can recognize the Warrior Pride winner weekly on the morning announcements?’” McNeish said. “So I put something together and we recognized the student the first week.”

Caughey’s husband David, also an instructor in the district, joined in as well. He already was contributing a series of “locker surprise” videos to the morning announcements, and offered his services to the PRIDE initiative.

“He’s a great storyteller, and he approached me about possibly doing these videos,” McNeish said.

“If you know me, I have no shame whatsoever. And he said, ‘How about you dressing up?’”

However, just as video production was ramping up, so was COVID-19, and Mohawk shifted from a hybrid learning scheduled to 100 percent remote.

“We didn’t want to stop, so we decided to do ‘Where’s Waldo?’ — where’s the student with PRIDE — and went out and did that,” McNeish said.

Other PRIDE videos followed, with McNeish donning costumes to pay homage to the Elf on the Shelf and the Will Farrell Christmas movie “Elf” — the latter included a spontaneous, unannounced song performance inside the Mt. Jackson Tic-Toc — before ultimately announcing and visiting the winning PRIDE student.

“It’s such a difficult time for students and so many students are struggling, so we tried to have some fun it,” Lisa Caughey said. “We thought, ‘what can we do to lift the spirits of the students?’ Mr. McNeish and Mr. Caughey have done a really good job of having fun with it and getting the kids to play a role in different videos that are meant to be funny, but also to highlight some of our PRIDE characteristics of our student, whoever it may be during that week.”

Students not being in school can make it a little more challenging to document PRIDE-worthy behavior, Caughey said, but there are still ways to do it.

“A student can still show respect, whether they’re sitting in a classroom or doing it virtually,” she said. “Personal responsibility includes getting their work done and having their computer charged for the day. It can be simple things like that.”

The nominations for PRIDE recognition and the bingo board now have gone virtual, as have the PRIDE tickets. That’s something that may continue even when in-person classes resume.

“The students tend to lose the physical tickets and when they come down to cash it in, they don’t have it and we didn’t have a record that they got one,” Caughey said. “So the virtual tickets creates a paper trail of who actually gets the ticket, so we can reward them either way.”

Dr. Lorree Houk, assistant to the superintendent, praised both the Warrior PRIDE program and the videos, as well a virtual peer tutoring program that was to launch this week.

“Our staff has been incredible as they sought out ways to engage with students in a different way during remote learning,” she said.

“We need recognition of the positive behaviors seen in our young people probably now more than ever, and the programs are continuing to accomplish that.”

McNeish, for one, has no intention of stopping.

“It’s a lot of fun putting these videos together,” he said. “I’m sure we’ll continue something. I’ve purchased all these costumes now; I’d better get some use out of them.”