Man shot, killed on city's East Side, suspect in custody 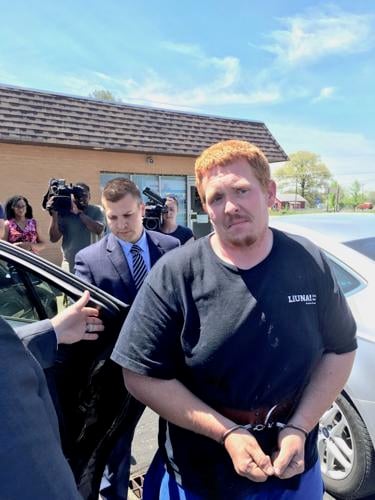 State troopers escort Shane Joseph McDevitt to a cruiser after he was charged with homicide in his mother’s death. 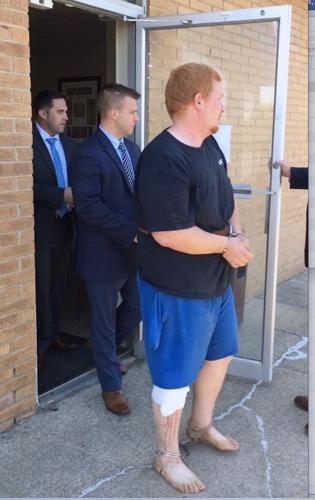 State troopers escort Shane Joseph McDevitt to a cruiser after he was charged with homicide in his mother’s death.

A barefoot, shackled, bandaged Shane Joseph McDevitt sat in the district courtroom in Neshannock Township on Wednesday afternoon, weeping as the judge read charges against him in the brutal, bludgeoning death of his mother.

The redheaded McDevitt is facing counts of criminal homicide and possessing instruments of crime in the murder of Cecelia Liposky, 65, who was found dead in her home Tuesday morning. The state police were called to her house at 2804 Mercer Road around 10:30 a.m., but learned Liposky had been dead since around 3 p.m. the day before.

She died from blunt force trauma to the head, according to results of an autopsy performed Tuesday evening by a forensic pathologist in Heritage Valley Medical Center in Beaver County.

McDevitt is accused of beating his mother in the head multiple times with a paperweight and a claw hammer. He then took her car, drove into Allegheny County and got into a police chase, ultimately wrecking the car by hitting a pole near the Pittsburgh Mills Mall, according to police reports. He escaped the crash with scrapes and scratches and police arrested him. He wore a bandage around his upper calf in the courtroom and his knees were still caked with dirt.

District Judge Rick Russo arraigned McDevitt and sent him to the Lawrence County jail without bond.

According to a criminal complaint, during the interview by local state police, McDevitt confessed to killing Liposky by repeatedly hitting her in the head with the round piece of glass and hammer. He provided other details about the crime scene that weren’t released to the media or other public sources that only Liposky’s attacker could have known, police reported. He told the troopers he had attacked his mother during an argument they had about his drug addiction, they said.

State police in New Castle had been looking for Liposky’s gray 2014 Nissan Sentra after finding her body at her home. According to the criminal complaint, her daughter called the police Tuesday morning, requesting a welfare check on her mother. Liposky’s current companion also called the police, reporting he was at her home and could see her through a window, lying unresponsive on the living room floor.

The Neshannock Township police arrived and forced their way into the house. They reported Liposky was dead with blood surrounding her body. The Neshannock officers summoned the state police to investigate the death.

Members of the state police Troop D major case team interviewed family members and neighbors and executed search warrants, processed and photographed the scene and collected physical evidence, which included a round, glass decorative paperweight and clawhammer, both smeared with blood near Liposky’s body.

Lawrence County Coroner Rich “R.J.” Johnson said she is believed to have been killed sometime late in the afternoon on Monday. He reported she was struck in the head multiple times when an argument escalated between her and McDevitt.

Police learned McDevitt had been staying at Liposky’s house since Sunday. His red Volkswagen sedan was parked in her garage, and her gray Nissan Sentra was missing from her house when they arrived, the complaint states. The police tried calling McDevitt on his cell phone but he did not answer. They also tried unsuccessfully to contact him through family and friends, the report said.

The police put out a bulletin to look out for the gray Nissan, and police in Allegheny County saw the Sentra around 2 a.m. Wednesday and tried to pull it over. The driver, later identified as McDevitt, fled and led police on a high-speed chase on Route 28 northbound before it crashed.

McDevitt was wanted on a warrant in Butler County for charges filed against him Monday involving access device fraud and identity theft, and for an incident in February resulting in charges of fleeing police, DUI and multiple driving and traffic violations. The state police in Allegheny County transported him to the Butler station. During questioning there, he reportedly told troopers that someone needed to go to his mother’s house because he killed her, the complaint states.

McDevitt was arraigned in Butler County and released on his own recognizance, and troopers returned him to Lawrence County’s station Wednesday morning for further questioning about his mother’s death.

McDevitt is considered innocent until proven guilty or adjudicated in a court of law.

The homicide charge against him, if he is convicted, could carry a maximum sentence of life imprisonment or death, Russo told him in reading him his charges. He set a tentative preliminary hearing date for May 18 in Central Court.

McDevitt previously served 11/2 to 3 years after he pled guilty to the robbery of a Subway restaurant in Neshannock Township in 2016 when he fled from police.