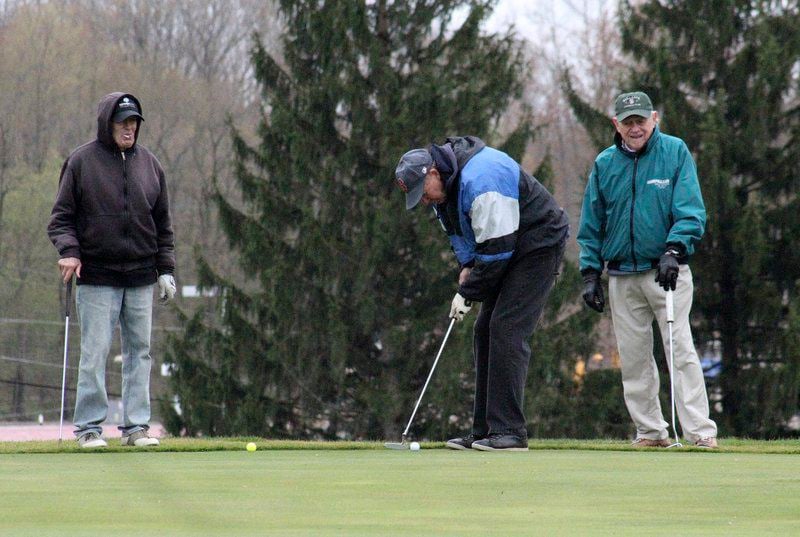 Gary Lehman, left, and Ken Carnahan watch as Dennis Mielke putts at Sylvan Heights Golf Course. Friday was the first day golf courses in Pennsylvania could open after being closed during the coronavirus pandemic. Local links are a key cog in the fight to keep local tourism going. 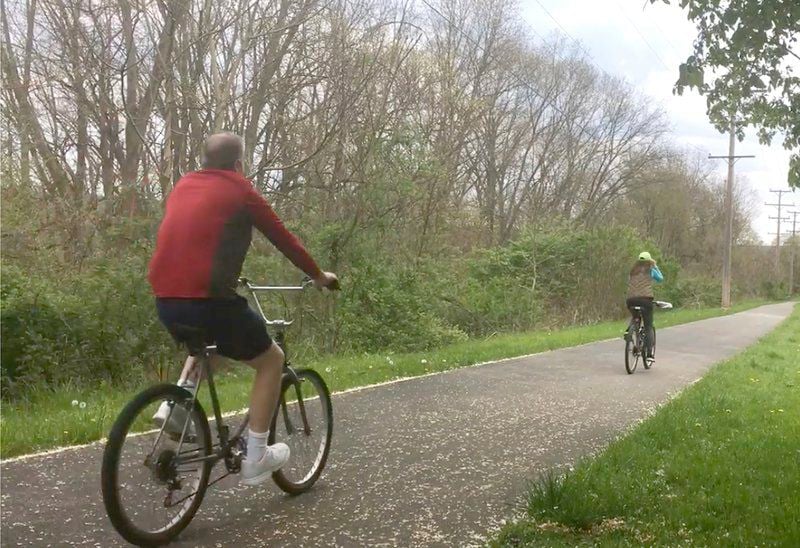 Bicyclists pedal down the Stavich Bike Trail in Union Township.

Gary Lehman, left, and Ken Carnahan watch as Dennis Mielke putts at Sylvan Heights Golf Course. Friday was the first day golf courses in Pennsylvania could open after being closed during the coronavirus pandemic. Local links are a key cog in the fight to keep local tourism going.

Bicyclists pedal down the Stavich Bike Trail in Union Township.

The nation’s travel industry on Sunday kicked off its annual National Travel and Tourism Week.

This year, there are only two things missing from the celebration: travelers and tourists.

“It’s tough in the respect that nothing is normal any more,” said Janet Falotico, director of Visit Lawrence County, the local tourism bureau. “What we do, and what we did every day for the last 20 years does not apply at this point.

“Now we have to look at things from a whole different perspective — far more creativity.”

One way in which that creativity has been manifested is a “Save Small Business in Lawrence County” promotion. Each day this week, one business and its special promotion will be highlighted on the tourism bureau’s social media platforms, along with a code that will allow participants to purchase the sale items online.

If the program is successful, Falotico said, it may be repeated regularly, even after coronavirus fears make way for a stronger sense of normalcy.

The Save Small Business initiative is just one of the things that Visit Lawrence County is doing to support local businesses and eateries feeling the pinch from a lack of both tourist and local dollars.

The agency’s first order of business, Falotico said, was restaurants.

“That was easy,” she said. “The restaurants can’t open, but they can still serve. So we made up this huge list of all the numbers and websites and everything so people could do their take-out orders.”

While that was a boon to folks looking for food that they didn’t have to cook, it didn’t necessarily benefit every restaurant. Some of them — and other small businesses as well — lacked the technology to take and process online orders.

Elliott, who last year created a website for the City of New Castle, put together Pay It Forward, a free-to-use platform for restaurants and other service-based businesses.

“Early on in this, it was easy to see that a lot of restaurants and small businesses were going to get caught without having any kind of touchless online payment,” Elliott said. “They’re going to be doing all take-out, so their phones will have busy signals all the time and they would end up losing business.

“I built a quick and robust platform that allows them to offer online ordering. I launched it, and I manually spent the time taking their menus and putting in items one by one for each of their locations.”

The platform also can be used by service industries such as hair salons, Elliott said, enabling them to provide online sales of gift cards that would supplement their income while they are closed.

Elliott spent his own money to build the platform, and he hosts it on his own servers. He doesn’t see how he could have done otherwise.

Still, the internet can’t take the place of annual events that lure visitors not only to their venues, but to surrounding restaurants, shops and hotels as well. A sampling of such happenings that already have been canceled include Westminster College’s commencement, the Ellwood City Arts, Crafts and Food Festival and Slovenefest. Additional cancellations seem likely.

Fortunately, Lawrence County has other attractions to offer. Friday’s opening of golf courses and campgrounds across the state plays a key role in that strategy, as did the opening of trout season earlier last month.

“I believe events will come back,” Falotico said. “I just don’t believe that’s going to be our way. I think people are looking for a safe venue to have adventures, which would be your golf courses, your campgrounds, where your family that you’re already secluded with can spend time and you don’t have to be six feet apart.

“I do believe people know us for our outdoor recreation opportunities. Lawrence County is filled with the most magnificent outdoor beauty. I’d put us up against anyone.”

Falotico said she has noticed more people and families out walking, and “I’ve seen more people on bikes than I ever have. I would be interested in how bike sales are going.”

Kyle McConnell has her answer.

“I am absolutely slammed right now,” said the owner of Bicycles and More in Westgate Plaza.

“This is probably the busiest I’ve ever been. This virus is nothing to joke about, but I’m probably the one business in town that has thrived from all of this.”

McConnell estimated he sold 20 to 25 bikes last week, and he’s got “a couple dozen” waiting for tune-ups. “I’m backed up a week,” he said.

McConnell said he’s hearing that the situation is much the same across the country: business at bicycle shops is booming. In Lawrence County, he notes, there are also plenty of places to enjoy riding, such as the Stavich Bike Trail, Moraine State Park and the back roads of Amish Country.

Ironically, he added, another sobering period of the past may be giving up its silver lining today.

“We have kind of a wealth of bike trails around here, with all the rail lines that have been abandoned and getting converted into bike trails all over the Rust Belt,” he said.

“That’s one result of the dying steel towns, is that you have all these old rail beds. You don’t see that in any other areas of the country. It’s pretty much just in this area.”

Ultimately, a lack of occupied hotel rooms isn’t just impacting ancillary businesses. It’s also stinging the people who are trying to carry the tourism banner against overwhelming odds: Visit Lawrence County, which is funded by a local hotel tax.

“Financially, we are at a major loss because people aren’t staying in hotels, so we’re not going to have income,” Falotico said. “What we have done over the years is to make sure that we have a six-month operating reserve for something like this, so we’re better than most.

“You always want to be the big dog, like a Pittsburgh or Allegheny County, but living in a rural area like Lawrence County, we never get the severe highs or the severe lows from a tourism standpoint. We’re going to be hurt but I think we can stand on our feet.”