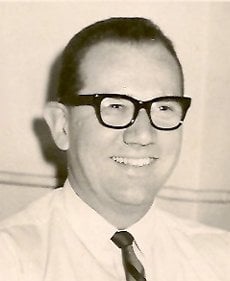 Bob Vosburg in his younger days. 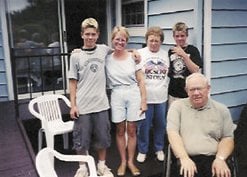 Bob Vosburg never was happier than when he spent time with his family. Here is a photo taken on the deck of his former Neshannock Township home with, from left, grandson Tommy, daughter Bonnie, wife Phyllis and grandson Zane.

Bob Vosburg in his younger days.

Bob Vosburg never was happier than when he spent time with his family. Here is a photo taken on the deck of his former Neshannock Township home with, from left, grandson Tommy, daughter Bonnie, wife Phyllis and grandson Zane.

I still can remember Bob Vosburg’s words when he called to offer me a sportswriting job at The News.

“You’re young and you don’t have a lot of newspaper experience, but I have a feeling about you. So if you want the job, it’s yours,” he said, adding sternly in his trademark booming voice, “Don’t let me down, Kayleen.”

So years later, when I picked up his office retirement cake and saw the words: “Congratulation’s on your retirement, Bob,” I hit the panic button.

“You have to fix that,” I told the bakery clerk.

“Fix what?” she asked, looking down at the cake quizzically.

The clerk looked at me like I was off my rocker and said, “Sorry, our decorator is gone for the day. But, really, who would even know if that apostrophe is in the wrong place?”

I sure wasn’t about to let Bob down on the day of his retirement after a long and storied career at The News, so I brought the cake back to the  office and did what any Bob Vosburg-fearing reporter would do — I got a butter knife and fixed (actually removed) the apostrophe.

We laughed about it later when an observant co-worker busted me after noticing the outline of the apostrophe still visible in the icing.

The death of Bob Vosburg at the age of 82 over the weekend brought a lot of memories rushing back of those early days in my career.

Bob made an immediate impression with me, when during my interview, he asked how important that grammar, punctuation and spelling were to a newspaper reporter.

“I know they’re very important in journalism,” I said meekly, shaking in my shoes simply being in the presence of this big man whose “This Man’s Castle” columns the sports and news junkie in me had followed since I was old enough to read.

“They’re everything,” he bellowed. “You can write the best story in the world, but if you spell someone’s name wrong in it, you’re done. You’ve ruined your credibility. You might as well not have even written the story.”

Then came the test.

“M-I-C-H-A-L-O-J-K-O,” I recited, knowing the name of the local bowling proprietor and his sons well after having spent several years during high school and college gaining experience in the trenches of The News sports department.

“I didn’t expect you to know that,” Bob said, his tone softening a bit. “Just remember, spelling is our lifeblood, it is everything in the newspaper business.”

So perhaps, that explains why that is one of the first things I tell a potential new hire: I will be your worst nightmare when it comes to grammar, punctuation and spelling. Get used to it. And don’t let me down.

And with apologies to the many athletic directors and coaches I have driven crazy over the years when I have looked at a roster and known by mere instinct that a name was spelled wrong, blame that one on Bob Vosburg.

“If I didn’t think you could do it,” Bob said matter-of-factly, “I would not have offered you the job.”

For the next several years, Bob schooled me on when to say yes and how to say no when receiving daily requests for coverage. He told me to develop a thick skin, learn to be a good listener and treat everyone the same way. And mostly, he knew when to temper his gruff approach with kindness to make me want to become a better editor and writer.

“This is good,” he would say when I turned in a story, “but let’s see if we can’t make it better.”

Bob taught me it was always better to answer one question too many rather than one question too few when writing a story. He wasn’t afraid to criticize, and I learned how to take it. And during the occasions that I earned words of praise, I was on top of the world.

An editor’s role meant my night shift switched to days. In the last years of Bob’s career, I joined him and several other editors as we put the paper together in the early morning hours.

One of my favorite memories is of Bob’s fascinating love-hate relationship with self-proclaimed local sports promoter Pete “Figo” Carvella. Like clockwork every morning just after 6 a.m., Figo would come strolling into the newsroom on the way to his barbershop on Kennedy Square.

Figo always had some kind of nonsense he would feed Bob in those pre-dawn hours, and Bob, a bit grouchy before he had his first cup of coffee, was never in the mood.

“You have five minutes, Figo, say what you need to say and move on,” Bob would tell him. Figo, of course, did not know when to stop and on more than one occasion, Bob spun his wheelchair out from around his desk, pointed toward the door and bellowed, “Out, Figo, out.” Figo would run out the door laughing, vowing to come back the next day to bother Bob some more.

Although Bob had used leg braces, crutches or a cane to get around during his younger years, during his last years at The News, he was in a wheelchair. And while he spent most of his life thinking that the paralysis in his legs was caused by a difficult breech birth that injured his spine, it wasn’t until he was in his 70s that he learned he was afflicted with spina bifida. Bob drove to work every day and did everything everyone else did. He made it known if he needed help, he would ask for it, which he rarely did.

Bob’s wheelchair was a fixture behind his desk in the newsroom and one day, the early-morning crew heard a noise that clearly sounded like a gunshot.

I looked over to see Bob’s wheelchair nearly perpendicular to the ground on the right side. No one moved at first as we all tried to figure out what had happened, afraid to approach him. It didn’t take long to realize that Bob’s chair had — well, had a blowout.

Finally, after several moments of silence and the stifling of giggles once we all knew he was OK, Bob looked up from his wheelchair and yelled, “Well, don’t just sit there, someone call my wife and tell her I need a tire.”

And that brings us to Phyllis. Bob had four loves in his life — his family, his God, his work and sports.

Bob adored Phyllis, whom he married shortly after graduating from Penn State University, and Phyllis adored Bob back. The two made a good life with their only daughter, Bonnie, and later, with Bonnie’s two sons, Tommy and Zane.

Bob lit up when Bonnie and her boys would stop into the office. My most vivid memory was from a day late in Bob’s career when the boys came to visit and immediately spotted a collection of wind-up toys in a nearby office. I think we all held our breath as, while Bob took a phone call, Tommy and Zane grabbed as many of the little toys as they could carry and set them up on the floor next to Grandpa’s desk.

Instead of scolding them, as we all no doubt expected, Bob stunned us all by bending down and winding up the toys, laughing heartily as the three of them got as many of the little creatures as they could moving at one time.

That was the side of Bob Vosburg that few saw, when he put aside the rough exterior and showed the soft teddy bear that lived inside of him.

The day of Bob’s retirement, in January, 1994, was a sad one for many of us. Bob confessed to me privately that he really was not ready to go, but he knew it was time.

I helped him out to his car with a final box of his belongings on that fateful day and his hands shook as the door closed behind him for the last time.

He told me that the only reason he could walk away at all was because when he knew that day was not far off, he hand-picked his successor, Tim Kolodziej.

“I’m leaving you in good hands,” he said, as he removed his glasses to wipe away the tears. “You work for Tim now and you stay loyal to him.”

I had the honor of serving beside Bob for 20 years on the Lawrence County Historical Society Sports Hall of Fame committee, which made me a bit more privy to Bob the man, not just Bob the newspaper editor. Outside of the office, Bob’s wicked sense of humor came out and his hearty laugh was a regular part of his daily existence. And I drank in his sports knowledge, both local and national, of which I have never known anyone to match.

His heart was broken when Phyllis died in 2008, after 52 years of marriage. Bob sold his Neshannock Township home and moved to Canonsburg, where his beloved Bonnie became his caregiver for the last years of his life.

Bob wrote several sports books, one near the end of his career and another following his retirement. He provided me with copies of those books to keep for reference. Years later, when I opened, “Sports Legends of Lawrence County,” I saw the hand-written words on the inside cover: “Kayleen — You never let me down. Bob Vosburg.”

I never had the nerve to ask him, but I wonder if he remembered the words he said to me during that fateful phone call so many years ago.

And although I know it’s not really true, because Bob Vosburg was an impossible act to follow, I treasure the words, just as I treasure the memory of the man who changed my life.

I am sure that he was welcomed with open arms by Bridey and Lindy, Harold and Buzz and Chuck. And, oh, the stories that are being told up there right now.

Rest well, Bob, you truly were one of a kind.

(Kayleen Cubbal is sports editor at The News.)