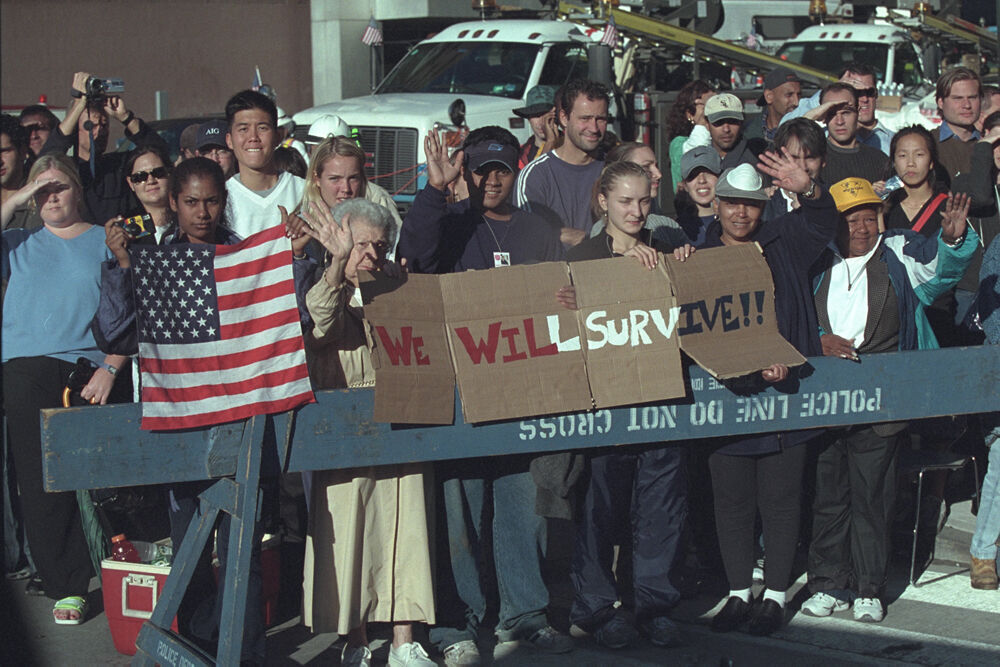 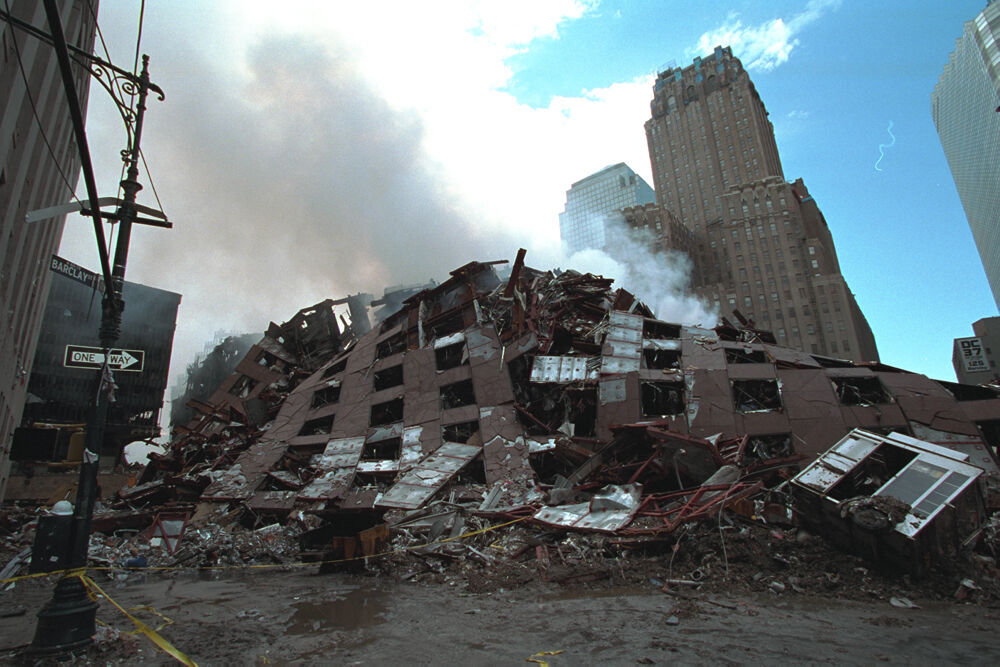 A view of the World Trade Center disaster site after the attacks. 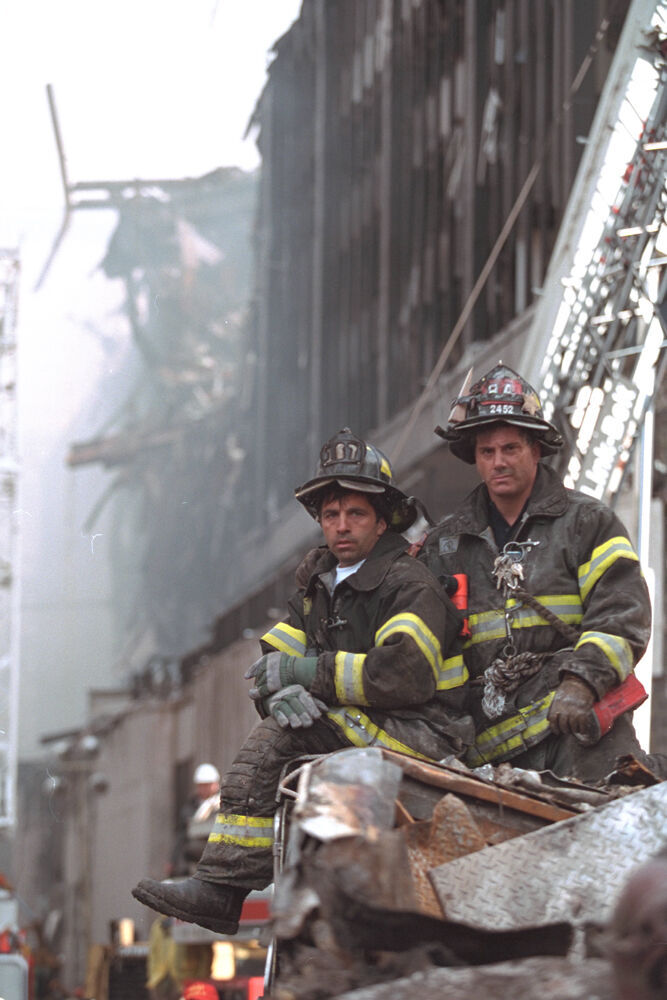 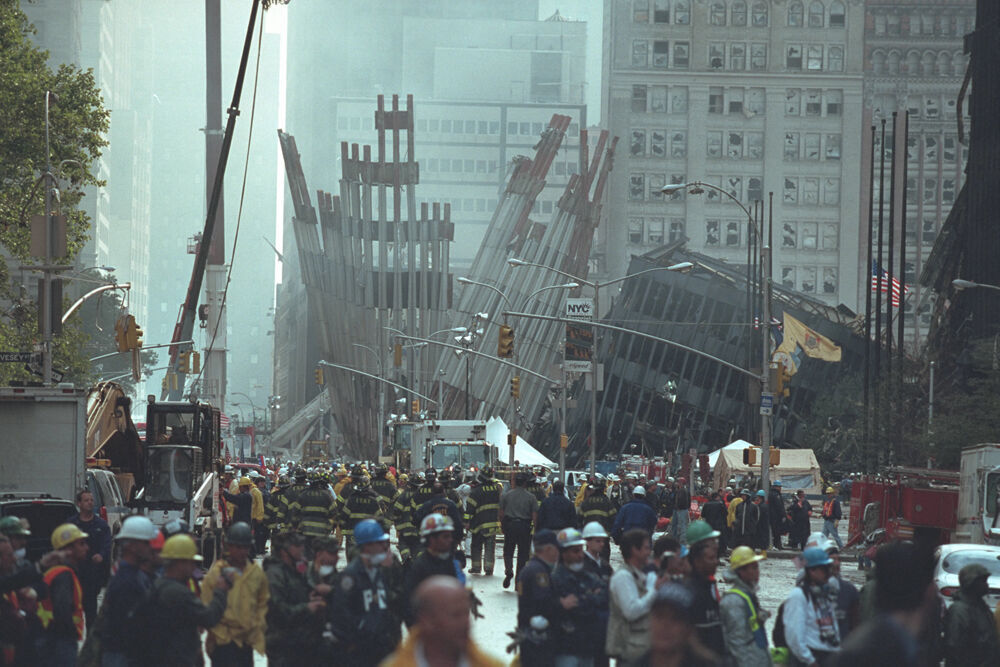 Emergency personnel crowd the streets in New York after the Sept. 11, 2001, attacks. 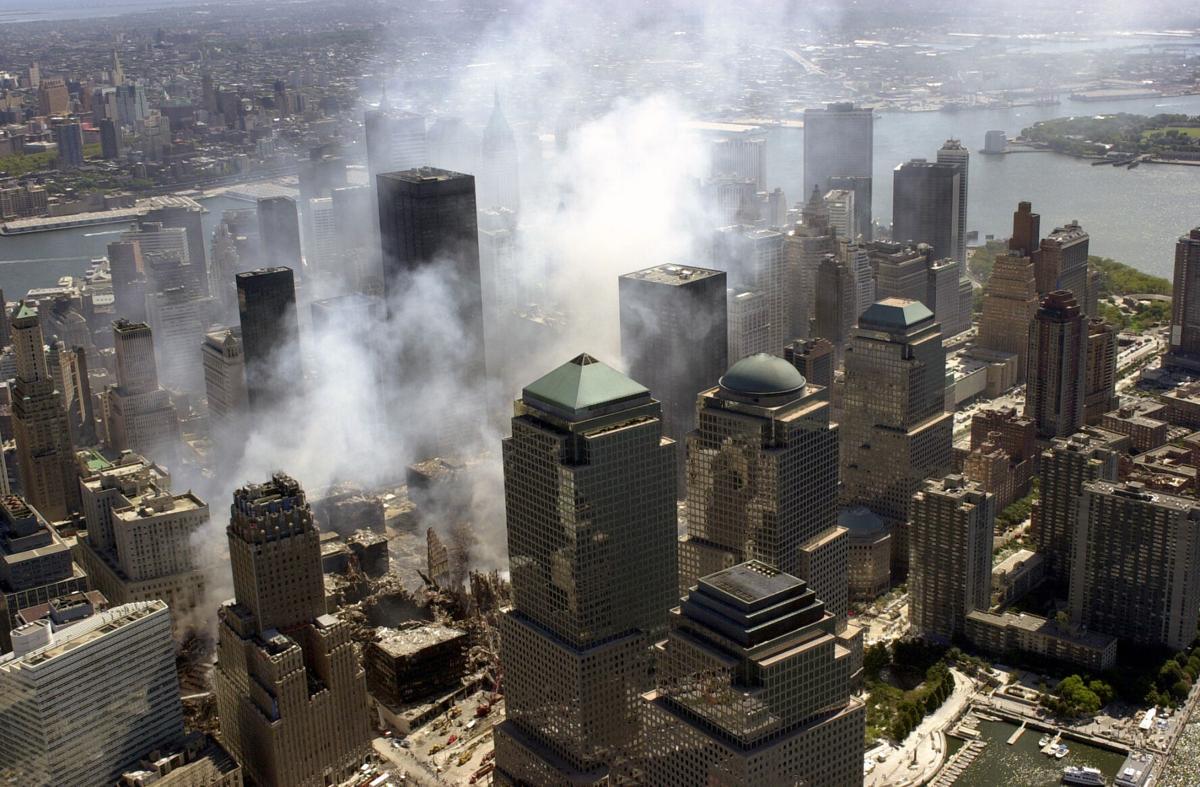 An aerial view, days after the terrorist attacks on American soil, the towers of the World Trade Center (WTC) sit as a pile of rubble in the streets of New York City. 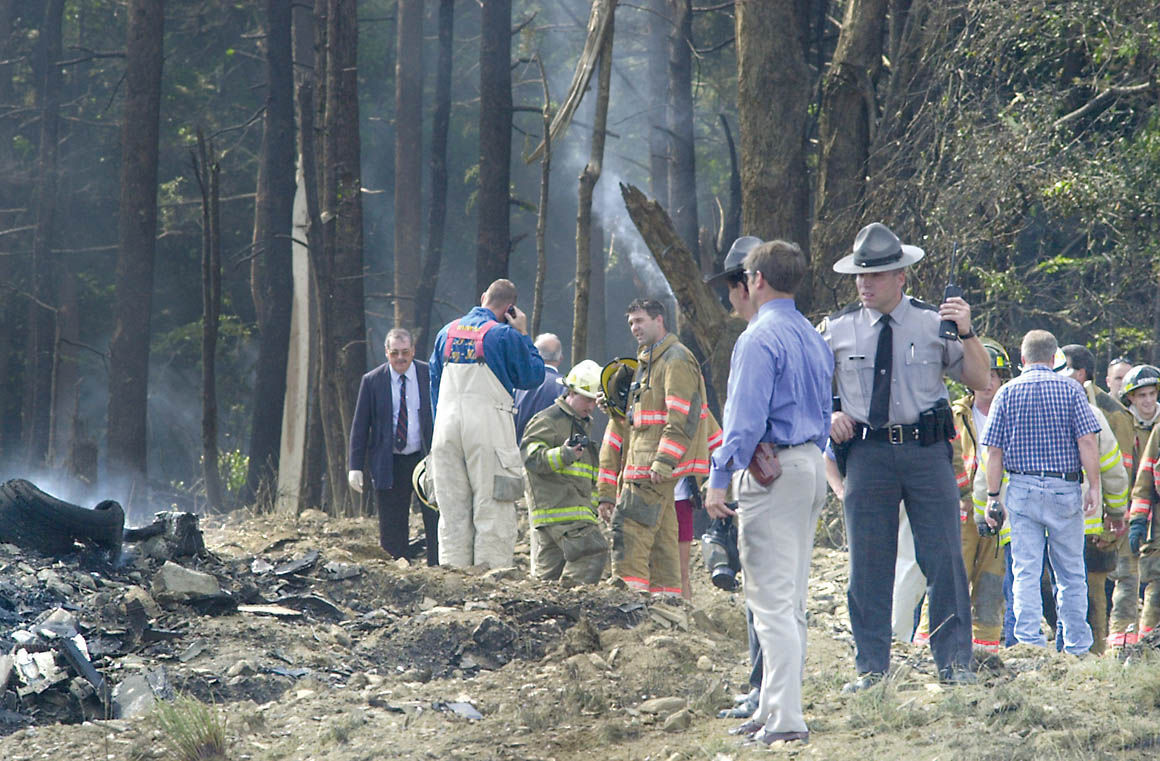 First responders work at the site of the crash of United Airlines Flight 93 near Shanksville, Pa., on Sept. 11, 2001. 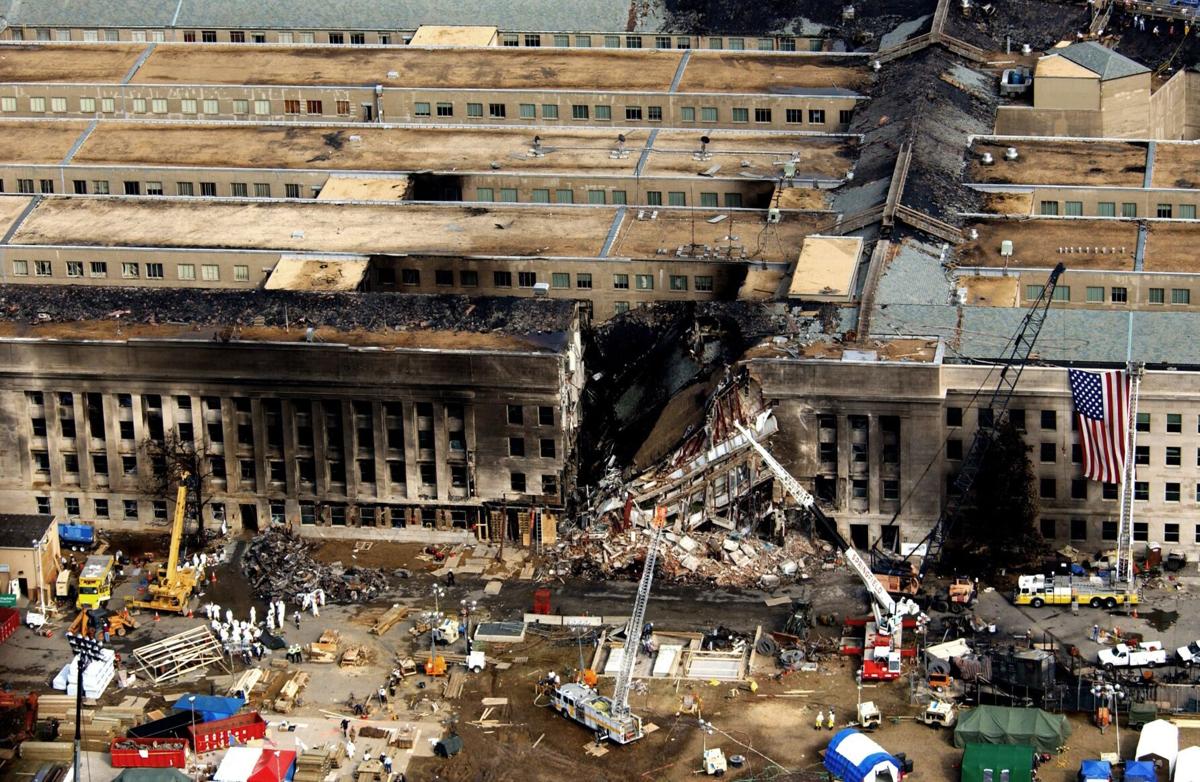 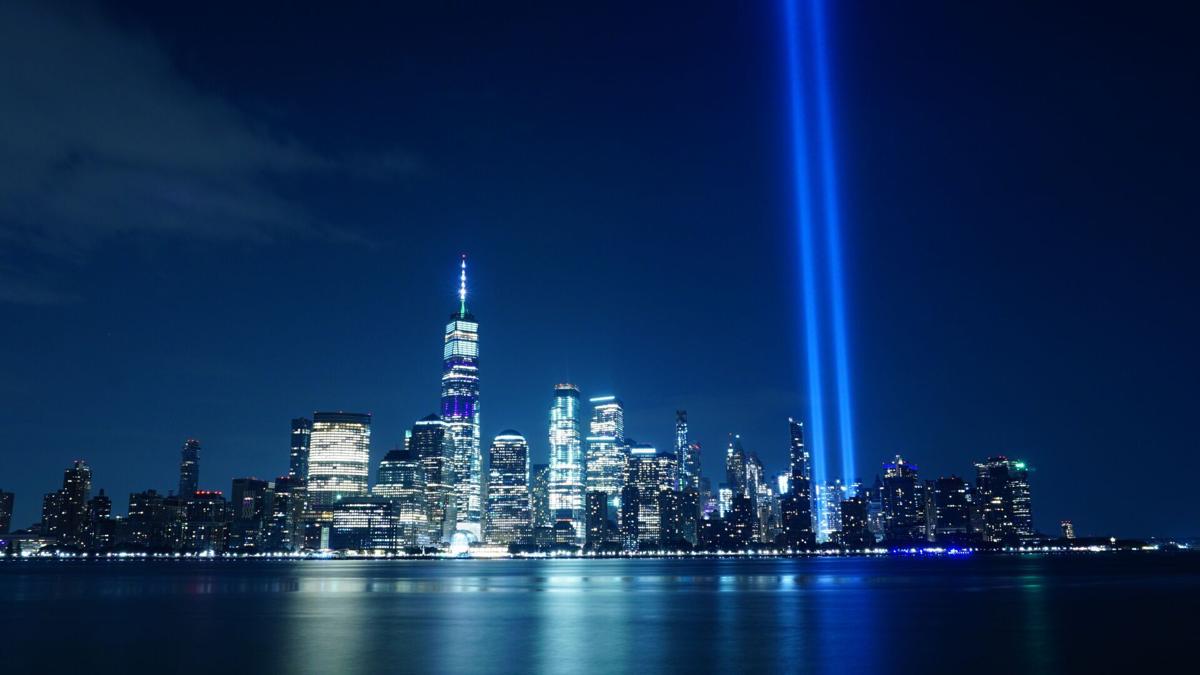 Emergency personnel crowd the streets in New York after the Sept. 11, 2001, attacks.

An aerial view, days after the terrorist attacks on American soil, the towers of the World Trade Center (WTC) sit as a pile of rubble in the streets of New York City.

First responders work at the site of the crash of United Airlines Flight 93 near Shanksville, Pa., on Sept. 11, 2001.

The terrorist attacks of Sept. 11, 2001, shattered our nation’s sense of security, horrified the nation and the world and killed 2,977 innocent people.

The horror and grief caused by 19 suicidal terrorists inspired an immediate outpouring of patriotic fervor. It also produced a sense of dread over when and where the next attack might come.

It spawned our nation’s longest war, the war in Afghanistan — launched less than a month after the 9/11 attacks. That war proved tragically difficult to bring to a conclusion, with the Taliban immediately re-establishing control of the country and desperate efforts made to evacuate Americans and Afghans who’d cooperated with our efforts throughout the conflict.

The raw emotion and fear have dimmed over the past 20 years years. An entire generation is reaching adulthood having never known a time before the attacks. There has not been a subsequent foreign attack on American soil.

Still, there’s little doubt the world and our nation were forever changed that fateful day.

Michael Balboni, who oversaw New York’s homeland security and criminal justice agencies during the administration of former Gov. Eliot Spitzer, said the attacks prompted a major emphasis on the need to bolster domestic security, in many different fronts and that those priorities continue to evolve today.

“Police officers on the beat in a suburb with a water purification plant were suddenly the defenders of critical infrastructure,” he said.

Brian Michael Jenkins, an expert on terrorism and senior advisor to the president of the RAND Corp., said that during terrorist attacks in the 1970s, “fatalities were measured in the tens. In the 1980s, that escalated into the hundreds,” he said. “Then on 9/11, of course, we crossed into the thousands.”

The event had “such a great psychological impact, including on the analysts, that it altered the perception of plausibility so much that terrorist scenarios that would have been dismissed as farfetched the day before 9/11” began to be taken seriously, Jenkins said.

Patrick Phelan, director of the New York State Association of Chiefs of Police, said, while the 9/11 attacks paved the way for the federal government to become more aggressive with surveillance measures to counter terror plots, he has concerns about the costs to Americans’ right to privacy.

Phelan began his law enforcement career in 1989 as an officer with the Greece, New York Police Department. “When I started, if somebody called and said someone left a backpack on the corner of Dewey and Stone, I would have gone there, picked it up, tried to figure out whose it is and then turned it over to property. It would have taken five minutes. Today, we’d clear the whole intersection and call the bomb squad,” he said.

It wasn’t just law enforcement, politicians and research analysts who learned there were threats everywhere.

James Piazza, a professor of international affairs at Penn State, recalled that while talking to a college student shortly after the attacks, he’d noticed she was worried.

He asked why, and the student said she was afraid for the safety of her parents, living in a small town in North Carolina.

“‘Well, we have a big Walmart there. That could be a target,’’’ he recalled the student saying. “What she’s saying when she’s saying that is, you know, I used to think that living in sort of like a smaller town in North Carolina, the rural areas, nothing much happened there. and that was kind of the nice thing about it. That could be secure. But now that’s gone,” Piazza said.

The new focus on cybersecurity, Balboni said, is an outgrowth of the war on terrorism, with the realization that the nation’s enemies could try to wreak havoc on the United States and its allies by targeting vulnerabilities in the cyber world as well as harming the nation through attacks on meat processing plants and through bioterrorism.

“Could our enemies mount another attack as they did on 9/11?” Balboni asked. “That’s very, very doubtful. But they are looking for other ways to hurt us in the cyber world or through other ways.”

At the time of the terror attacks, recalled Grant Reeher, director of the Campbell Public Affairs Institute at Syracuse University, “There was great hope and expectation it would have a profound impact on our civil life and lead to a recapturing of some of what we lost in the decades leading up to it, that it would be a wake-up call for people to become more engaged.”

But while there was a short-term boost in the public’s confidence in the leadership of the federal government, Reeher said, the nation entered a new, prolonged period of polarization sparked by the war on terror, one that continues.

“We fell very short of attaining the civic hopes that moment generated,” he said of Sept. 11.