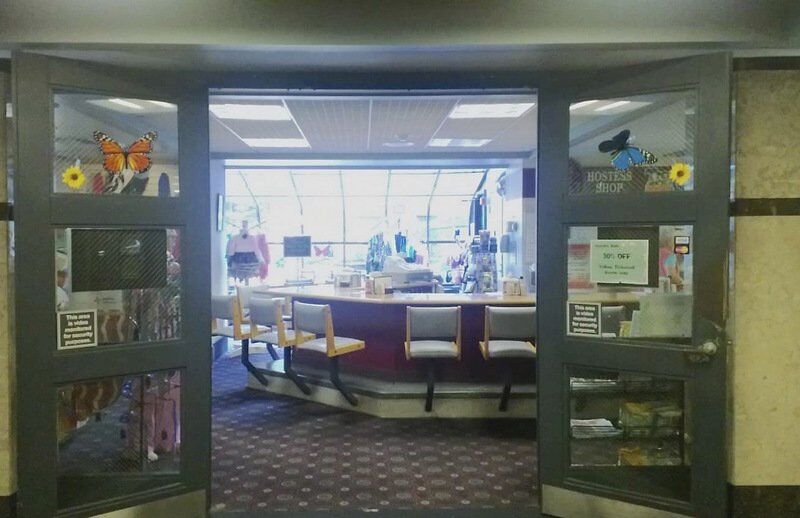 The counter of the Jameson Hostess Shop was a popular place for people to stop and have lunch. 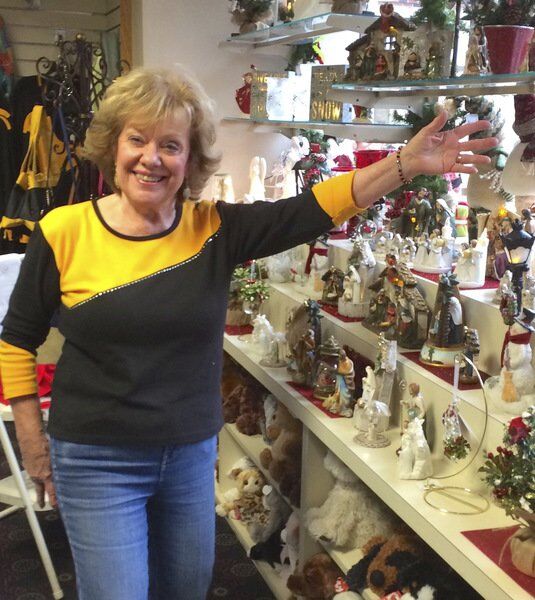 Thelma Turner, a 28-year volunteer member of the Jameson Junior Guild, puts finishing touches on a Christmas display inside Jameson's Hostess Shop in a prior year.

The counter of the Jameson Hostess Shop was a popular place for people to stop and have lunch.

Thelma Turner, a 28-year volunteer member of the Jameson Junior Guild, puts finishing touches on a Christmas display inside Jameson's Hostess Shop in a prior year.

For 72 years, people went to Jameson Hospital just to have lunch at the hostess shop for egg salad sandwiches, milkshakes, soups or the daily special.

With its array of unique jewelry, accessories and chic clothing, the store was a treasure trove for gifts at holidays and other times. Visitors of patients would stop there to buy them small gifts, slippers, magazines, flowers or candy.

All of that is now only a memory. The hospital announced Wednesday that the hostess shop, which closed in mid-March because of the COVID-19 pandemic, will remain shut down permanently.

The volunteer-run store, located inside the main lobby of UPMC Jameson Hospital, was an entity separate from hospital operations. It had been started by the Jameson Junior Guild volunteers in 1948, and it moved to the lobby space in 1953.

The permanent closure was not the guild's decision, said President Judy Martello. UPMC officials informed guild members recently that the hospital will be taking over that space for other uses, she said.

"It's a decision made mostly by UPMC," Martello said.

"Over the years, our incredible hospital auxiliary, the Jameson Junior Guild, has run the (shop) and dedicated countless volunteer hours to add value to our hospital," she said.

The all-volunteer guild used funds from sales to purchase items that have improved the quality of the hospital and added to patient satisfaction, Lombardo said Thursday in an email. She attributed the decision for permanent closure to declining guild membership over the past several years, and limited volunteers on-site amid the COVID-19 pandemic. Thus, the guild's fundraising capabilities have diminished, making it impossible to keep the hostess shop running, Lombardo said.

"Everyone at UPMC Jameson is appreciative of the work and devotion of the guild," she said. "We continue to support our auxiliary in its future efforts to fundraise in different and creative ways and we are exploring options to offer some of the hostess shop favorites in other areas of the hospital."

UPMC Jameson president Robert Jackson and other UPMC officials met with the guild members, "and it was more of an announcement than a discussion," Martello said. "We've had a couple other meetings with UPMC about how to get rid of our inventory."

Lombardo said the hospital and the guild are looking at inventive ways to have a sale of some type to off load the shop's remaining merchandise, "and the employees and the public will be part of that."

"It's a sad day," Martello said. "It's their hospital and their decision, and we have to make the best of it. They're just doing away with what the guild was known for."

The guild initially opened the hostess shop to raise money for the hospital, and it donates all of its profit to the hospital, Martello said. The shop had a couple of paid workers, but guild volunteers ran the shop Mondays through Fridays, did the purchasing and kept it stocked.

"Things have changed," Martello said. "The guild is not going away. It will remain part of UPMC Jameson in a different manner."

She said it still plans to sponsor lobby sales and raise funds for the hospital, but "it just won't be through the hostess shop."

Once the pandemic is under control and volunteers and visitors are allowed back in the hospital, the guild will be involved in fundraising again, she said. When the popular snack bar was open, the shop "was packed all time," Martello reflected, and all of the food was made there.

And while sales at the shop had declined, "we were still making money," she said.

The Jameson Junior Guild currently has 75 members, and all but two are older than 65. For now, the only volunteers allowed in the hospital are those younger ones, and visitors are restricted to one specific person per patient.

One of the guild's highlights of the year since 1965 was its annual pre-holiday bazaar, traditionally held the first Thursday in November. The bazaar, too, was canceled this year because of the pandemic.

Wendy Wojcik, past president of the guild, recalls one of her favorite memories of the hostess shop as decorating it for the annual bazaar.

"We would start early the Sunday morning before, and by the end of the day, we would have turned the shop into a Christmas wonderland," she said.

"While working together over the years with my fellow guild members, we created memories that we will always cherish, and bonded friendships that will continue," Wojcik said. "It really was a labor of love for the community, the hospital and for each other."

Thelma Turner, a guild volunteer for 28 years, was one of the shop's buyers.

"I loved the shop and will miss it and all our wonderful, faithful customers," Turner said. "Thanks to all of you."