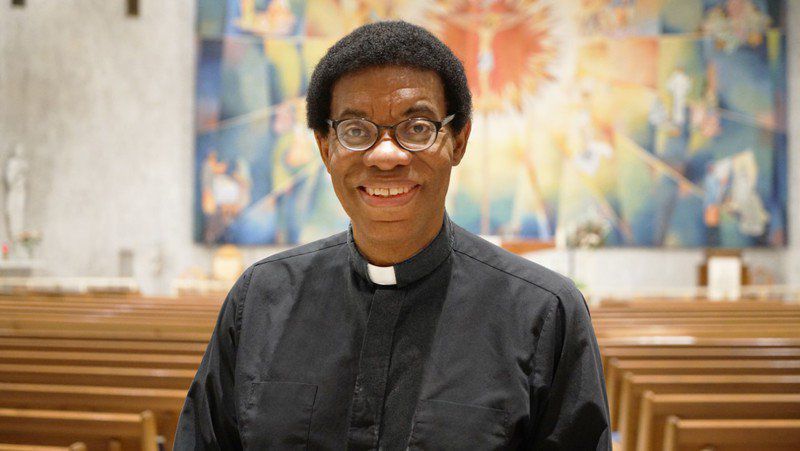 Father Matthew Hawkins, who spent the last year as a deacon with Holy Spirit Parish, was ordained Saturday as a priest in the Diocese of Pittsburgh. 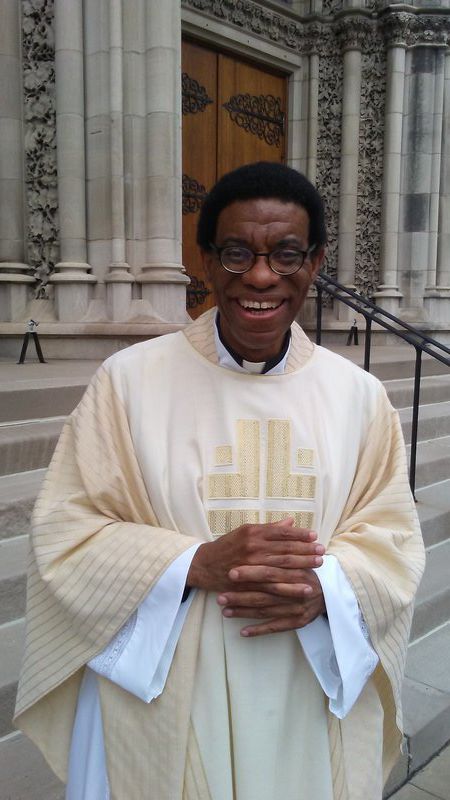 Father Matthew Hawkins is all smiles outside of St. Paul Cathedral in Pittsburgh on Saturday following his ordination. as a priest. 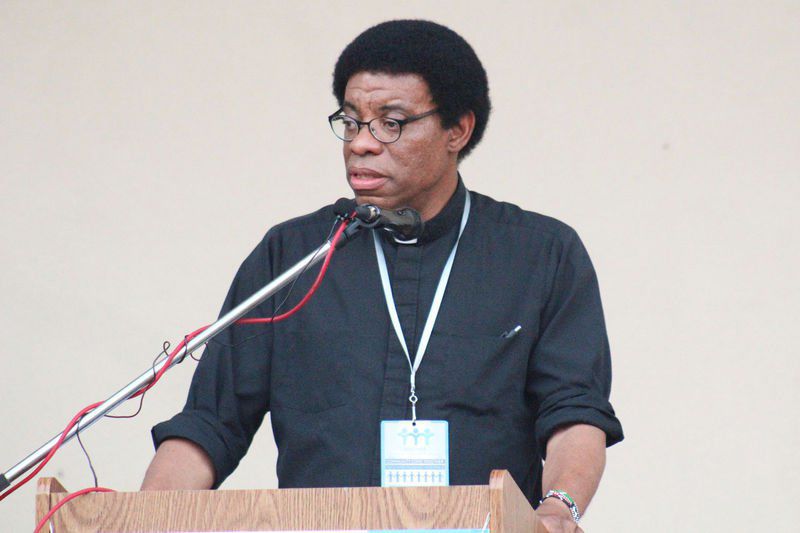 Then-Deacon C. Matthew Hawkins speaks at the Aug. 1, 2019,  Community Come Together to Stand Against Violence event. 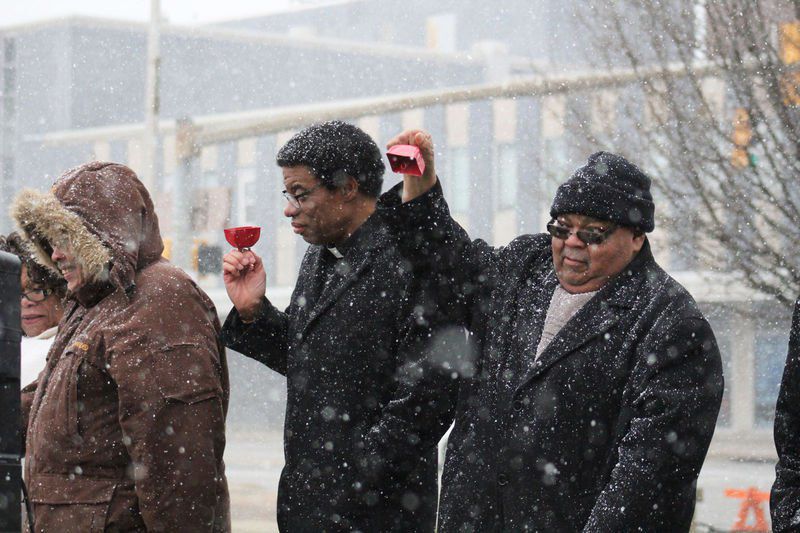 Father Matthew Hawkins, who spent the last year as a deacon with Holy Spirit Parish, was ordained Saturday as a priest in the Diocese of Pittsburgh.

Father Matthew Hawkins is all smiles outside of St. Paul Cathedral in Pittsburgh on Saturday following his ordination. as a priest.

Then-Deacon C. Matthew Hawkins speaks at the Aug. 1, 2019,  Community Come Together to Stand Against Violence event.

He’s now also a bit of a rarity.

As a seminarian, Hawkins, 63, spent his 2017 pastoral year in New Castle, serving what then were four separate city parishes. At the end of that year, he went back to Baltimore to complete his seminary studies, but returned to New Castle to be ordained as a deacon at St. Mary Church in 2019. Since that time, he has continued to serve what is now Holy Spirit Parish, the merger of seven Lawrence County Catholic parishes.

When Hawkins was ordained as a priest Saturday at St. Paul Cathedral in Pittsburgh and assigned to the role of parochial vicar in the newly formed personal parish for the Black Catholic community in the Hill District of Pittsburgh, he joined a statistically small subset of his fellow clerics. According to the U.S. Conference of Catholic Bishops, out of 37,302 diocesan and religious-order priests in the United States, just 250 are African-American.

Moreover, according to a study of 2020 ordinands to the priesthood conducted by the Center for Applied Research in the Apostolate Georgetown University Washington, D.C.:

•The average age that most ordinands first considered priesthood was 16, and their average age at ordination was 34. Hawkins was in his 50s when he began to explore a vocation, and he was ordained at 63.

•Two-thirds of responding 2020 ordinands (67 percent) are Caucasian. Only one in 20 (6 percent) is African/African American/black.

•90 percent of responding ordinands report being baptized Catholic as an infant. Hawkins embraced the faith at age 21.

•85 percent report that both of their parents were Catholic when they were children. Hawkins’s father was an African Methodist Episcopal minister and his mother, the daughter of a Baptist minister.

The fact that he should be just beginning his life as a priest at a time when most other adults are considering retirement has proven one thing to Hawkins.

“It tells me that God is always full of surprises,” he said. “It’s never too late for God to throw a surprise in your life.”

From a faith standpoint, he was an active member of St. Benedict the Moor Parish in Pittsburgh, he worked as a consultant to the Diocese of Pittsburgh and served on the parish pastoral council of St. Paul Cathedral.

The priesthood may not have been the furthest thing from his mind, but still, he did not consider it realistic.

“I had been attracted to the priesthood in some sense, but I didn’t think it was very practical,” he said. “How do you just pull up, really toward the end of your career, and do something entirely different, and really relearn everything?”

Still, as he received encouragement from parishioners, priests and even the bishop to explore the possibility, he committed to a weekend discernment retreat in the mountains of West Virginia. While out for a walk there, something on a nearby hilltop caught his eye, and he went to investigate.

It was an old cemetery, with grave markers dating from the 19th and 18th centuries.

“The historian in me kicked in, and I started reading these tombstones,” Hawkins recalled. “There was one section that was almost entirely of infants and children. Many of the other markers were for people who didn’t get past 50. And I started to think about how short life is.

“While I was satisfied with my life, I couldn’t help but think that at the end of my life, will I have done all I could do? How am I going to feel at the end of my life if I have a calling, something that’s been tugging at my heart, and I ignored it because I thought it wasn’t practical. So that sort of clinched it.”

During this time, Hawkins also was a nocturnal adorer at the Ryan Catholic Newman Center in the Oakland section of Pittsburgh. For seven years, he spent Fridays from 5 to 6 a.m. praying there in Eucharistic Adoration.

And yet, one thing still nagged at Hawkins. Could he really fully commit his life to the responsibilities of priesthood?

“A priest has to be all in,” he said. “You really have to give yourself to this. Your life isn’t your own, your time isn’t your own. I was pretty sure that I couldn’t do that; I didn’t think I could make that kind of commitment.

“It would mean that I had to be constantly on call, I would have to tend to other people’s needs first. I would have to put a lot of my wants on the back burner in order to respond to the needs of the people. I wasn’t sure I could be that selfless.”

Then, however, he began to examine his existing lifestyle.

He would teach middle schoolers during the day, and college students at night. He was doing consulting work for community economic development and meeting with the parents of the middle schoolers in the evenings and on weekends.

“I realized I had the schedule pretty much that a priest would have,” he said. “I was giving myself totally to these things. What shocked me was that, not only didn’t it kill me, I really felt as though I was thriving. I felt fully alive.

“So I thought, ‘OK. Maybe this is what I’m supposed to do.’ It took away that last excuse for not discerning the priesthood.”

If there were any residual trepidation about becoming a priest, his past year as a deacon washed it away.

“I am over the expectation that it’s going to be based on my strength,” he said. “What I’ve seen over the past year as a deacon, the kinds of things that I’ve had to respond to, there is no way that I could do any of those things on my own strength. This really isn’t on me. If the question is whether or not I’m up to the task, the answer is no. That’s quite clear.

“But what I’ve found, having gone through numerous situations that demanded more than I could possibly give, is that at the end of the day, it doesn’t rest on me. I just have to trust in divine Providence that I will have the strength, the wisdom and the courage to do what needs to be done.”