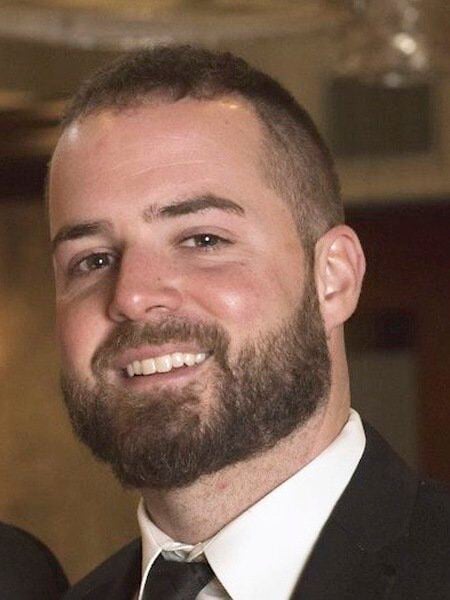 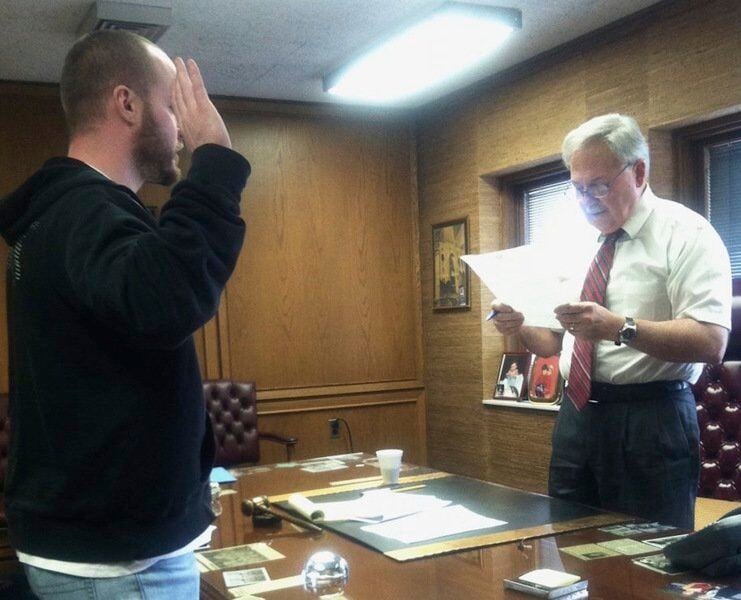 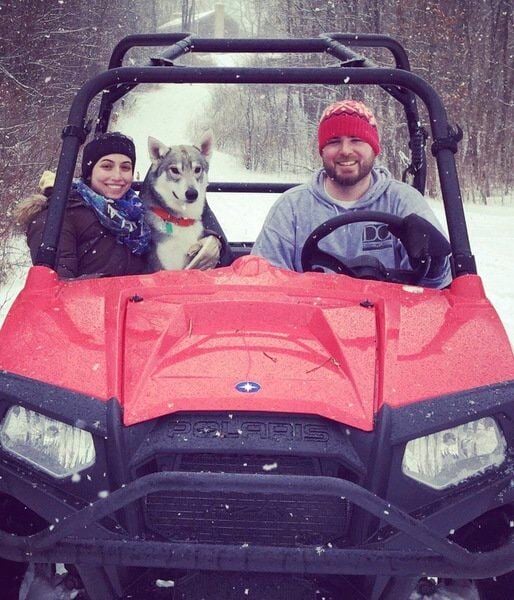 Ginny Jacob takes a ride in the snow with Aaron Cangey and their shared dog, Django, a Tamaskan, now 7, in this 2016 photo.

But the hopes that Keith had for the budding attorney were dashed two years ago, when Cangey, at age 31, took his own life on Oct. 9, 2018. It was a day of shock and disbelief for fellow attorneys, judges and other coworkers in the Lawrence County court system.

Cangey, an assistant public defender, had managed to hide his depression, bipolar disorder and alcohol addiction from most people. To Keith, “he could light up a room. Pretty much everyone he met loved him. He was a tenacious advocate for his clients, especially young underprivileged people and those with addiction and mental health issues.”

The spirit of his work with defendants in the public defender’s office and the Lawrence County Treatment Court — which helps pull nonviolent offenders out of drug addiction — has lived on through the Aaron Michael Cangey Memorial Foundation. The foundation was established in his name by his girlfriend of seven years, Ginny Jacob, and members of his family in October 2018 after his funeral when many people were asking where they could donate in his memory.

Jacob contacted attorney Bradley G. Olson Jr., one of Cangey’s close friends, who drew up the paperwork. It officially became a tax-deductible, nonprofit foundation six months later, to provide funding for defendants’ life expenses while they are struggling to succeed, Jacob explained.

“The foundation’s purpose is to honor Aaron’s memory and continue the work he cared about so deeply,” Jacob said. “It’s really close to my heart, my family’s heart and Aaron’s heart, and it’s a really huge benefit to the community. We wanted to tack it to treatment court because that sector is overlooked a lot. We wanted something that showcased him as an attorney.”

Those who benefit from the foundation funds must complete applications that are overseen with referral letters from a common pleas judge or a county probation officer. The applications then are reviewed and approved by Jacob and members of Cangey’s family who are on the board. Jacob is the foundation’s director, Cangey’s mother, Jeanne Walker of Cleveland, is its secretary, and his younger brother, Andrew Cangey of Columbus, Ohio, is the treasurer. Aaron’s father, Frank Cangey, and his older brother, Adam Cangey, and his stepbrother, Anthony Scarnati, also were involved in its incorporation.

Examples of how the funds are used include: assisting with rent costs to maintain a safe environment, purchasing large appliances, paying fees associated with obtaining certifications, or providing tuition assistance for obtaining college credits.

“Our goal is to help participants and graduates gain independence while staying on a positive path,” Jacob said. “The things we take for granted are the small things that they need to move forward.”

For Christmas this year, amid circumstances surrounding COVID-19, the foundation members gave Treatment Court recipients the option of $100 credit toward a use of their choosing, such as rent or utilities, Jacob explained. The foundation also provided them with 150 transit authority bus passes.

Since the foundation formed, it has amassed about $30,000 through donations, she said. The foundation has spent nearly $2,000 in financial aid in addition to the grocery money. So far, it’s helped more than 20 applicants.

Donations may be made through its website at www.aaronmichaelcangeymemorialfoundation.org or www.AMCMF.org.

The Foundation also is recognized through AmazonSmile, which enables people to donate to the foundation whenever they make an Amazon purchase.

“People have been so giving, and they continue to give,” Jacob said. “Some people have donated every month, just because they loved him and they want to see the foundation succeed.”

The two-pronged program also has free professional clothing available for men and women through its Workwear Closet, for those in need for new job or career prospects. The Closet, which provides clean, donated clothing, opened in October and already has outfitted two people, Jacob said. The clothes are also available to other agencies, including CareerLink.

The idea came about because “we had many of Aaron’s suits, a lot of which were given to him from other attorneys who worked with him,” she said. When Cangey was new and entering the bar, “they knew how expensive it was to get a wardrobe started. We decided to pass that idea along.”

Whatever clothing is not used goes to people through other local agencies.

Cangey was born and raised in Mahoningtown and was a New Castle High School graduate, having played defensive tackle on the high school football team. He earned a criminal justice degree from Slippery Rock University before completing his studies at Southwestern Law School in Los Angeles and returning to his hometown.

“When I learned he was going to law school, I was really happy for him,” Judge Motto said. Cangey worked as an intern and law clerk for the president judge, and Motto administered him his oath as an attorney after passing the state bar exam.

“He really worked hard at being a lawyer, and he had great compassion for his clients,” Motto said. “He helped them solve very difficult problems and make the best out of some difficult situations.”

The judge said he was heartbroken when he learned of Cangey’s death.

“I think the foundation is a real tribute to him,” said Motto, who oversees the treatment and mental health program. “It reflects his personality, and it seems to do good for people who find themselves in a tough spot in life. Any need we have for anyone in our program, they’re always receptive to it. A foundation that bears his name is a real tribute to him, and helps keep his memory alive.”

The foundation and Cangey’s survivors also have received emotional support from people in the county court system like Central Court administrator Linda Abraham, and her assistant, Alice Heaney, who dedicated a bench in the court in Cangey’s memory.

“Which was beyond beautiful,” Jacob said. “It was a wonderful gesture for them to do that.”

Cangey had met the majority of his clients in Central Court almost daily. Many of his clients have reached out to Jacob and told her how much he helped them, she said. “He truly cared about them.”

Keith said, “He was a well-rounded, intelligent individual and a prolific legal writer and researcher,” he said. “I recognized his talent immediately, and I hired him in hopes he would eventually take over that office. I wanted him to become the next public defender, sooner rather than later.

“I think about him every day,” he said. “He wasn’t just my colleague, he was my friend.”