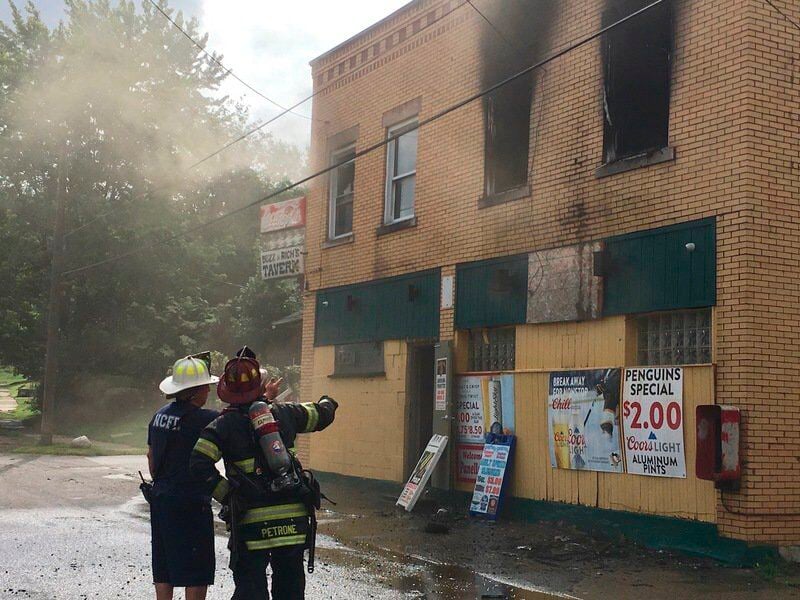 New Castle firefighters look at the damage after fighting a fire at Buzz & Rich’s Tavern on Tuesday morning. 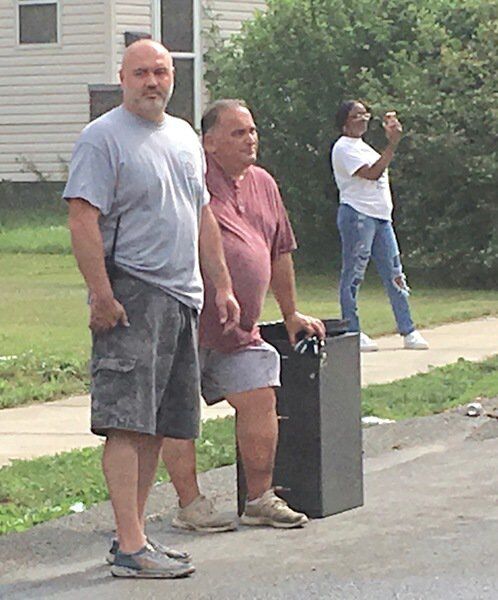 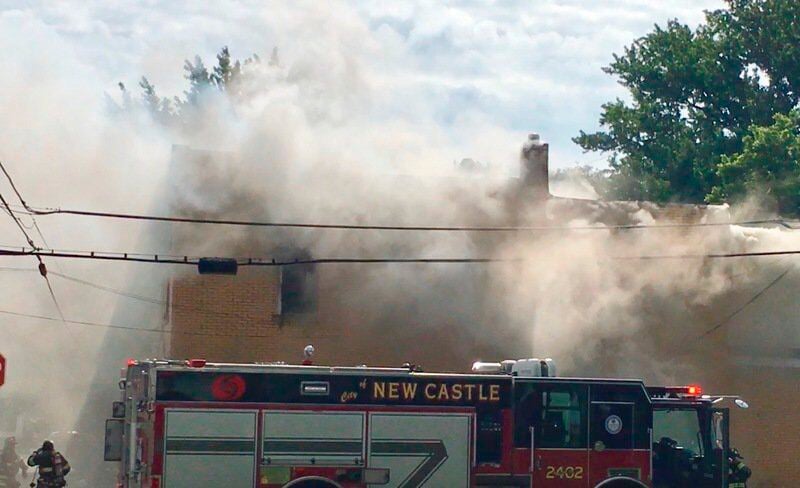 Smoke billows from the top floor of the longstanding Buzz & Rich’s Tavern at 1701 Hamilton St. The building caught fire around 9:15 a.m. on Tuesday. 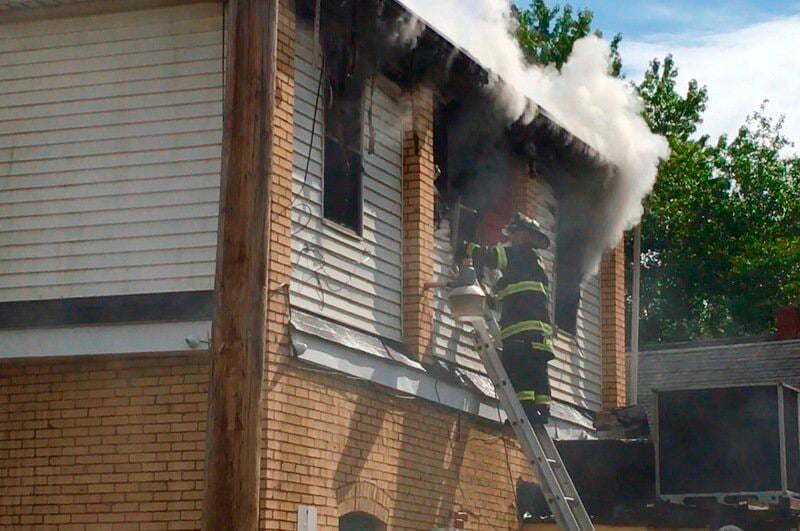 A New Castle fireman attacks the fire at Buzz and Rich's Tavern through a back second-floor window. 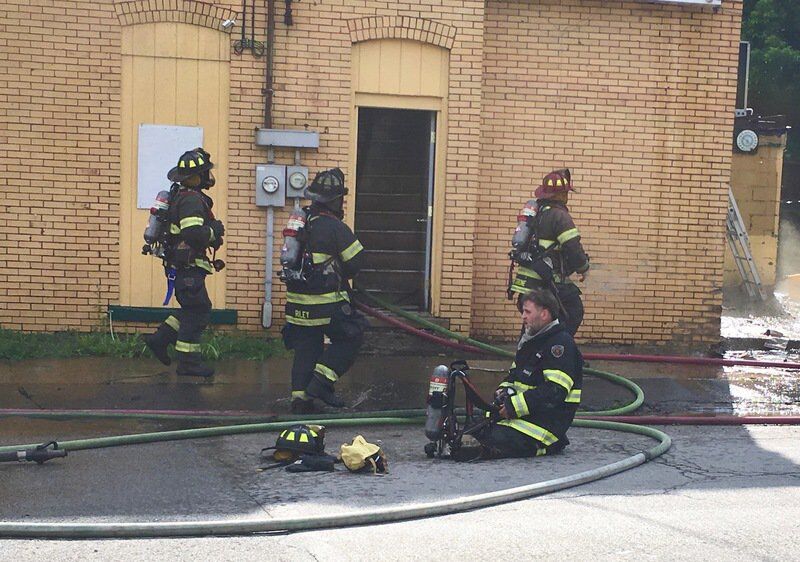 A hot and exhausted New Castle firefighter takes a break while others prepare to continue the battle on the Tuesday morning blaze at Buzz and Rich's Tavern. 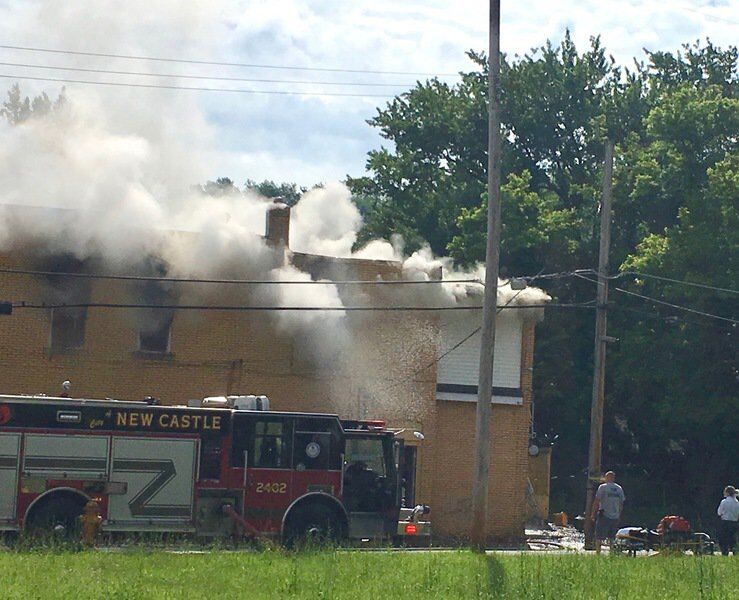 Smoke billows from the second floor and roof of Buzz & Rich's Tavern at 1701 Hamilton St.

New Castle firefighters look at the damage after fighting a fire at Buzz & Rich’s Tavern on Tuesday morning.

Smoke billows from the top floor of the longstanding Buzz & Rich’s Tavern at 1701 Hamilton St. The building caught fire around 9:15 a.m. on Tuesday.

A New Castle fireman attacks the fire at Buzz and Rich's Tavern through a back second-floor window.

A hot and exhausted New Castle firefighter takes a break while others prepare to continue the battle on the Tuesday morning blaze at Buzz and Rich's Tavern.

Smoke billows from the second floor and roof of Buzz & Rich's Tavern at 1701 Hamilton St.

For 57 years, Buzz & Rich’s Tavern was a popular South Side neighborhood thirst-quenching spot in the city of New Castle.

But people didn’t just go there to drink. They went there for lunch, to visit with friends and neighbors, tell stories, eat chicken wings and sandwiches and socialize. And people who were friends with owners Mark Panella and his siblings were frequent customers at lunchtime.

The longstanding family-owned neighborhood bar went up in smoke Tuesday morning as many of the neighbors, patrons and the owner stood watching with shocked and sad faces as New Castle firefighters strived to save the building.

Panella said he was working inside the bar around 9:15 a.m. when a beer deliveryman had arrived and noticed smoke coming from the back upstairs windows. He said a woman tenant was living in an upstairs apartment, and he believed the fire started in a back bedroom of her apartment. She was not at home.

A man who was asleep in a neighboring apartment narrowly escaped injury, according to fire Chief Mike Kobbe. He said another resident woke up the tenant and alerted him to go downstairs.

“The smoke was already starting to bank down beneath the ceiling, so he just made it out before the smoke got too thick,” Kobbe said, adding, “One minute there was smoke and two minutes later, the whole second floor was on fire. There was a lot of solid wood construction and old lumber.”

Panella, a retired fireman who had been fire chief for about six years, said his family carried no insurance on the building or business.

“As of now, we are writing the building off as a loss,” Kobbe said. “There was heavy, heavy damage to the second floor.”

The fire never spread to the first floor, but the inside of the bar and restaurant primarily have heavy water damage, he said, noting, “It’s a good solid brick building, but will be really hard to rehabilitate.”

Panella said Tuesday he is undecided about whether his family will try to rebuild or reopen the tavern.

Kobbe said the initial fire call came in at 9:22 a.m. The firefighters were at the scene until almost noon.

“We arrived to find smoke and flames coming from every window of the second floor,” he said.

The Union Township Volunteer Fire Department and the Shenanago Area Fire District were called to assist, just because of the heat, he said. Shenango sent a ladder truck and Union sent an engine. McGonigle Ambulance personnel stood by but they did not have to treat anyone for smoke or injuries.

“We put a general alarm out and had 18 firefighters on the scene, plus the Shenango and Union complement,” he said. “It took a really big effort to get it down.”

Three upstairs apartments were rented by one couple and two two individuals, all of whom are being assisted by the Red Cross which is providing them with food vouchers and lodging, Kobbe said.

He said the cause of the fire right now is undetermined and a city police fire detective was called to investigate it.

“They got a significant lunch crowd for it being the little bar that it is,” he said, estimating about 20 to 25 people would go there every day for lunch, “especially a lot of business people who know Mark. And the food was really good.”

Beverly "Beebe" Guinaugh, 85, of St. Louis, Missouri, formerly a longtime resident of New Castle, passed away on Saturday, July 24, 2021, at the Bethesda Meadow Nursing Home, Ellisville, Missouri. Mrs. Guinaugh was born on Jan. 18, 1936, in New Castle, a daughter of the late Ferdinand and Do…