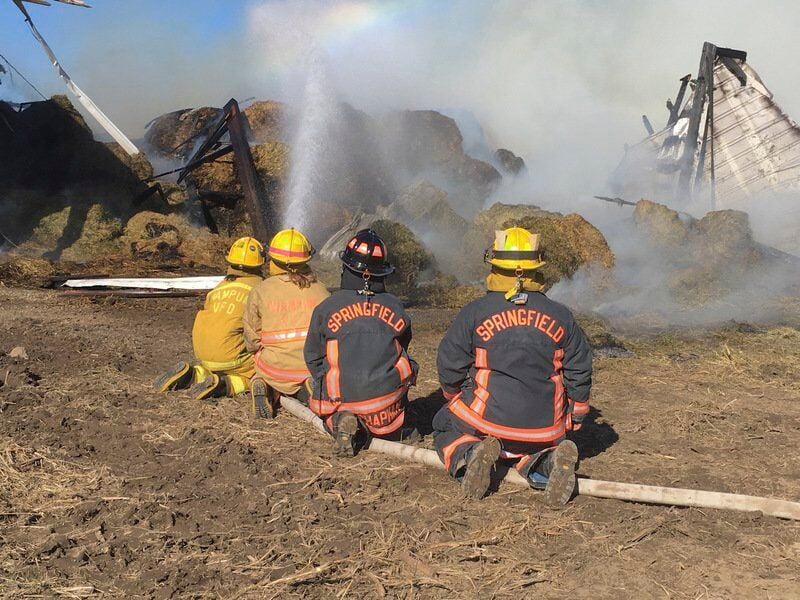 Firefighters from various departments spray water on burning and smoldering hay bales  after a barn housing them caught fire Tuesday afternoon on the Trotter farm in North Beaver Township. 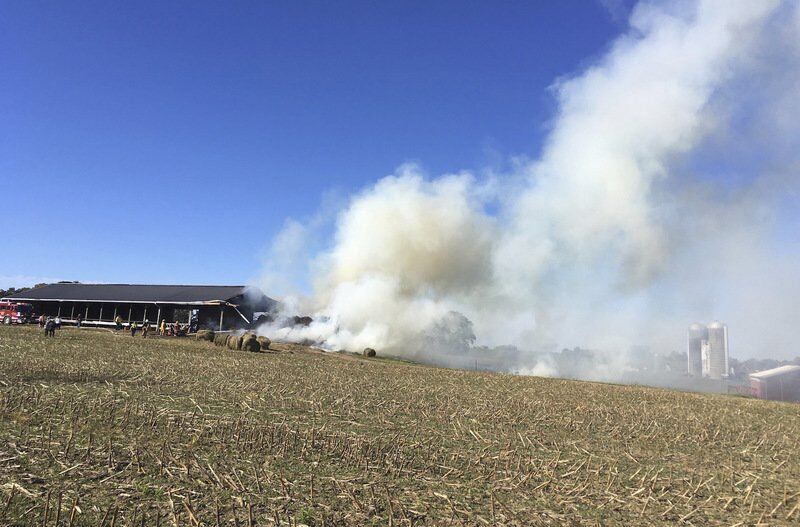 Smoke billows from the remains of a section of barn on Martin School Road in North Beaver Township. The barn is owned by David and Jill Trotter.

Firefighters from various departments spray water on burning and smoldering hay bales  after a barn housing them caught fire Tuesday afternoon on the Trotter farm in North Beaver Township.

Smoke billows from the remains of a section of barn on Martin School Road in North Beaver Township. The barn is owned by David and Jill Trotter.

Members of the David Trotter family and a farmhand managed to rescue 16 yearling calves from their North Beaver Township auxiliary barn Tuesday before a section of it went up in flames.

Five volunteer fire companies were summoned to the open adjunct building around 3:20 p.m. with reports of smoke and flames showing. The fire destroyed about a quarter of the building's structure. The fire crews managed to douse the blaze before it spread to the entire barn, but nearly 200 bales of hay were consumed.

Smoke that billowed high in the sky could be seen from about five miles away.

David Trotter, part owner of the Trotacre Dairy Farm and a noted Guernsey dairy breeder, said that a farm worker alerted him to the fire and told him to call 911.

"I did, I checked on the bales, and we started throwing water on them," he said. He believes that the older bales could have started smoldering. About half of them were a year old, while about 88 were newly harvested.

"We've got to deal with it, and we will deal with it," he said of the fire. He estimated about a quarter of the building was lost, in addition to the round hay bales. "I'm just thankful that nobody got hurt."

He also is relieved that he didn't have any equipment in the building, he said.

The Trotter Farm was host to a world Guernsey tour in the summer of 2019, and this year, in the midst of a pandemic, it sponsored a two-weekend farm visitation day to showcase its dairy operation for the public after the Lawrence County Fair was canceled.

The barn that caught fire was not the main barn; it was on a piece of ground that Trotter and his wife, Jill, had purchased to expand the farm operation.

"It's just hard right now, with COVID and the low prices being paid to farmers," Trotter said. "Then this happens. You just have to keep trying."

The North Beaver Township fire department was assisted at the scene by the Wampum, New Beaver and Bessemer Borough fire companies, and the fire department of Springfield, Ohio. Several of their tankers filled with water were taken to the scene.