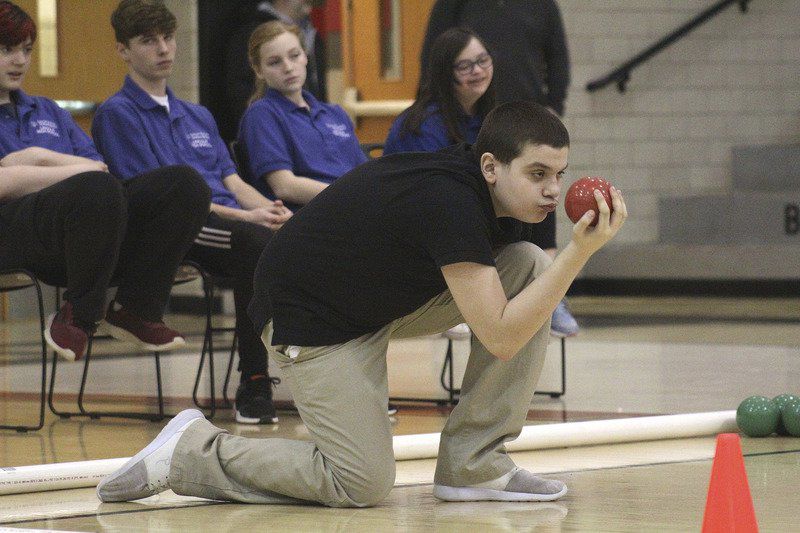 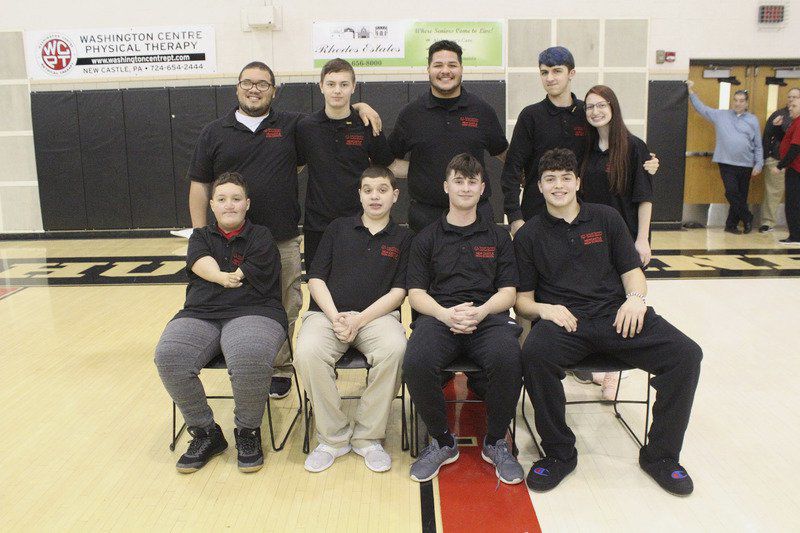 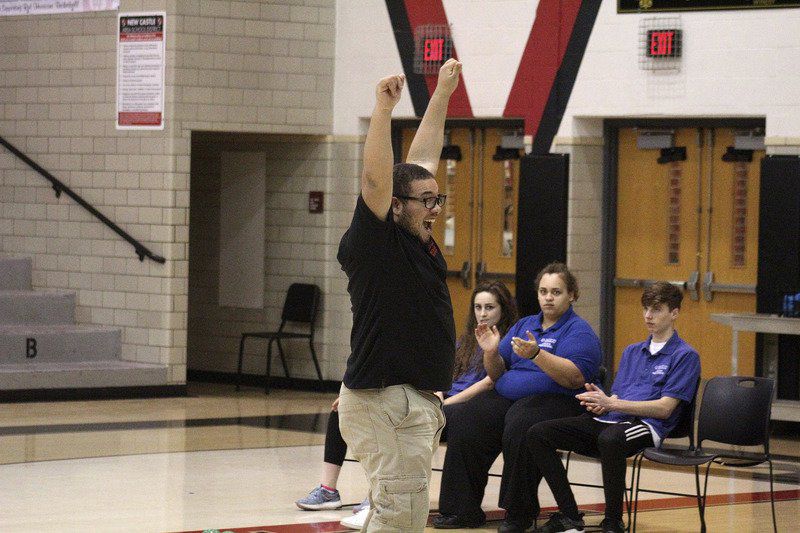 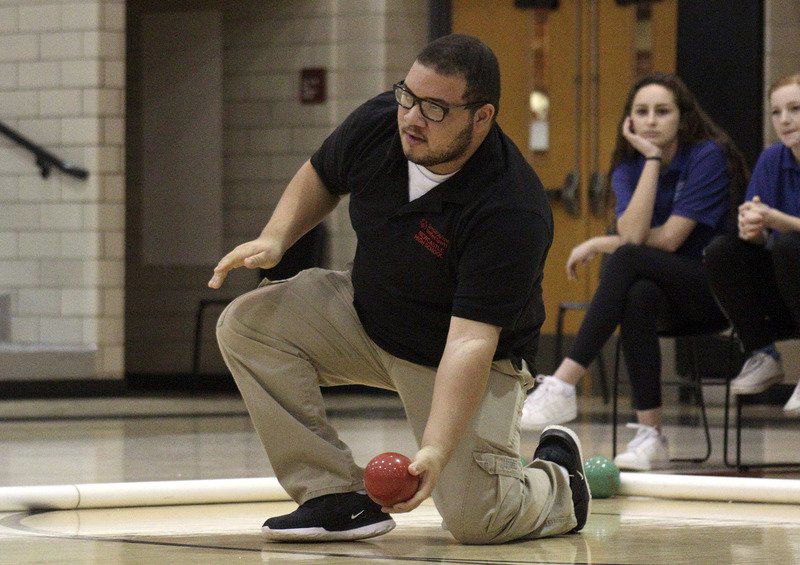 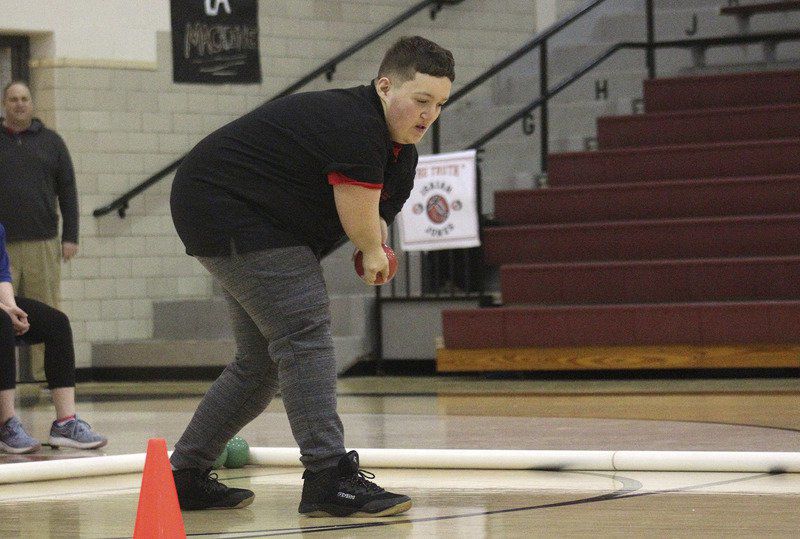 Anthony Malachina gets down close to the hardwood inside the Ne-Ca-Hi Field House, closes one eye and concentrates on his target.

Tossing his red rubber ball toward a smaller ball — the blue pallina — Malachina watches the action then celebrates a little and gives high-fives to teammates.

The crowd, made up of students staying past dismissal time, teachers, administrators and coaches, applauds. It can only mean one thing — it's bocce day at New Castle High School.

The bocce team competes through Interscholastic Unified Sports and Special Olympics of Pennsylvania. Unified sports bring together teammates with and without intellectual disabilities — or "athletes" and "partners" — onto the same team, according to Special Olympics.

"That's my goal to have everyone be inclusive and be one big family and support each other," New Castle Area School District Superintendent Debbie DeBlasio said. "This is a highlight for me of the school year that we're including every student. I think this is what it's all about."

James Birtalan, a special education teacher and team coach, said the support the school receives during its one home match each year is incredible and shows the kind of community present in New Castle.

"This is my favorite day of the year when we do this," special education teacher and bocce coach James Birtalan said. "It's my son's fifth birthday and there's no place I'd rather be than here with him and my father watching. It's just a great day for us."

While New Castle lost on the court Tuesday — Ellwood City Lincoln came through in the clutch to break a 7-7 overtime tie in the rubbermatch third game — wins and losses aren't the only important thing.

"The big thing I see is their social improvement," Birtalan said. "They start coming out of their shell and being more social at school. They're not quiet or reserved. They see posters with their names on it and they're going around school giving high-fives. They're talking to other kids. The overall social aspect of it is tremendous for these kids."

Prior to Tuesday's action, a pep rally was held that included the school's cheerleaders leading the crowd, songs from the pep band, starting lineup announcements and renditions of the national anthem and Special Olympics athlete oath. Jillian Stringfellow and Amanda Breed, two Slippery Rock University graduates from the adaptive physical activity master's degree program work with New Castle as consultants for the Special Olympics. The two were officials on Tuesday.

Donofrio, New Castle's homecoming queen, said her experience being on the team for two years helped shape her future plans. After graduation this spring, she'll be headed to Slippery Rock University's honors college where she plans to major in English with a special education minor.

"I always knew I wanted to go for teaching but then I realized I wanted to have special education in some way because of bocce," Donofrio said, "and because of the kids on the team and how it just makes you feel when you're playing with them. They call you your friend and it's just so uplifting."

Part of her admissions essay to the honors college talked about being on the bocce team and her interactions with the partners. Donofrio said she also wrote about the bocce team in her essay for the Jack Butz Humanitarian Scholarship award.

She is New Castle High School's representative for the scholarship funds, which will be divided among the eight other high schools in Lawrence County — including the Lawrence County Career and Technical Center — at a banquet this spring.

"No matter what we are or what we fit into, we love the (partners) and how the school is so together," Donofrio said.

Meanwhile, other athlete members on New Castle's team include Micaletti and Bailey, standouts on the baseball diamond and football field, respectively.

Then there's Rocco Bernadina. A 6-foot-5 junior, Bernadina made the decision to focus on his baseball career instead of going out for the basketball team — he's committed to play at Kent State University after graduation — he was persistent in asking Birtalan if he could fill a spot on the bocce team.

"I figured it'd be really cool to do something with the kids," Birtalan said.

He and Micaletti played over the summer at Cascade Park, practicing their skills.

New Castle later this month will travel to Slippery Rock University for a "culminating event," or regional tournament comprising of teams from Lawrence, Butler and Mercer counties. The winner moves on to the state tournament in Hershey. Although the players and coaches want to win, that's not all that matters.

"I just like seeing the kids be happy whether they win or lose," Bernadina said. "They're always so positive about it and so happy just to be out here."