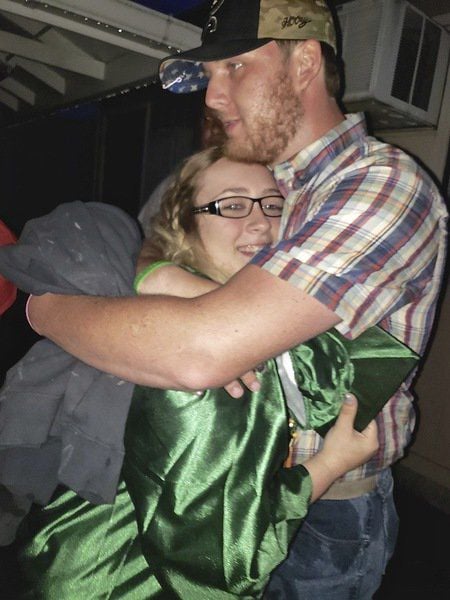 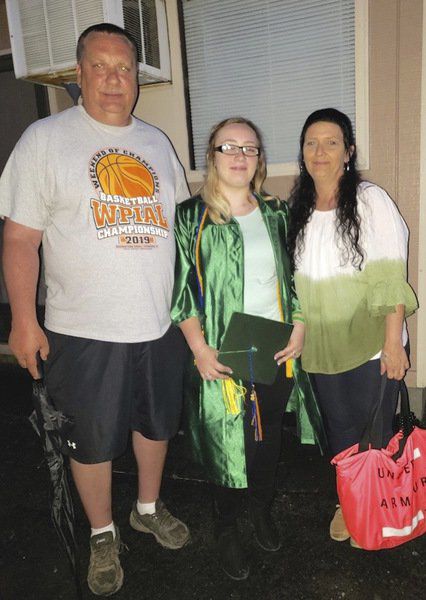 Alissa Jones, center, stands with her father, Norman, left, and her mother, Phyllis, after her high school graduation in West Virginia. 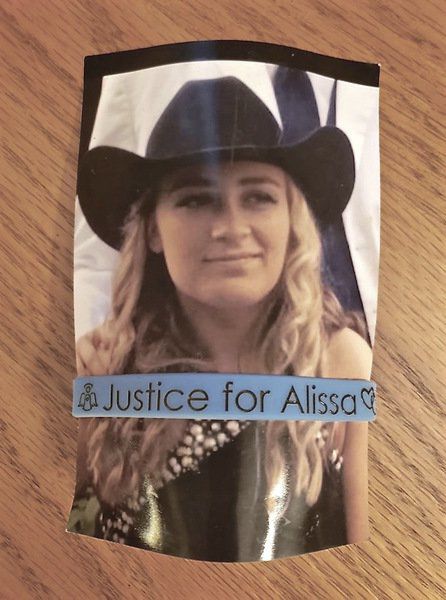 The family of Alissa Jones is awaiting results of an investigation into her death. The teen was killed in a July 2 stemming from injuries she sustained in a crash in West Pittsburg. 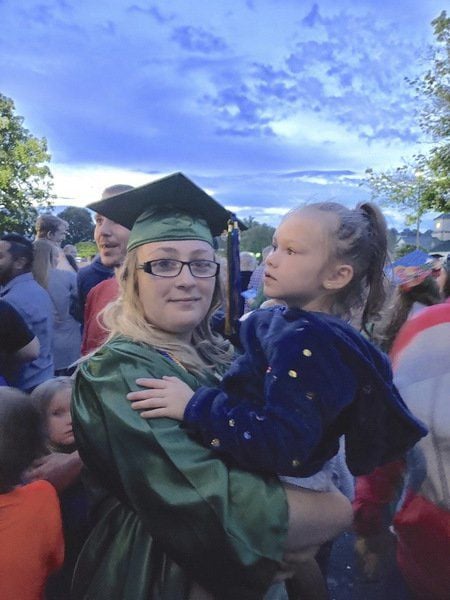 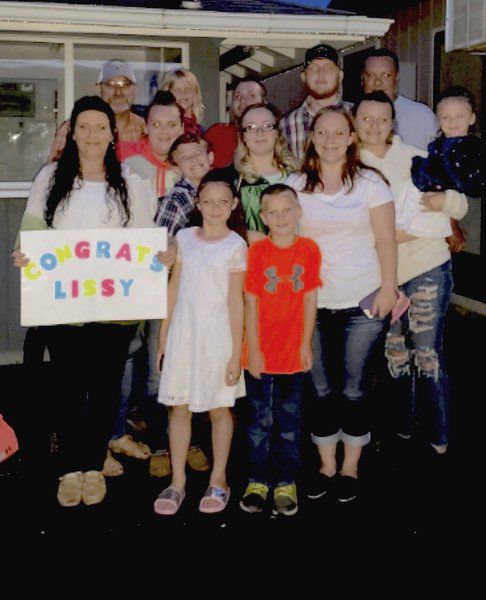 Alissa Jones and her family gather for a picture after her graduation. She is wearing glasses in the center of the second row. 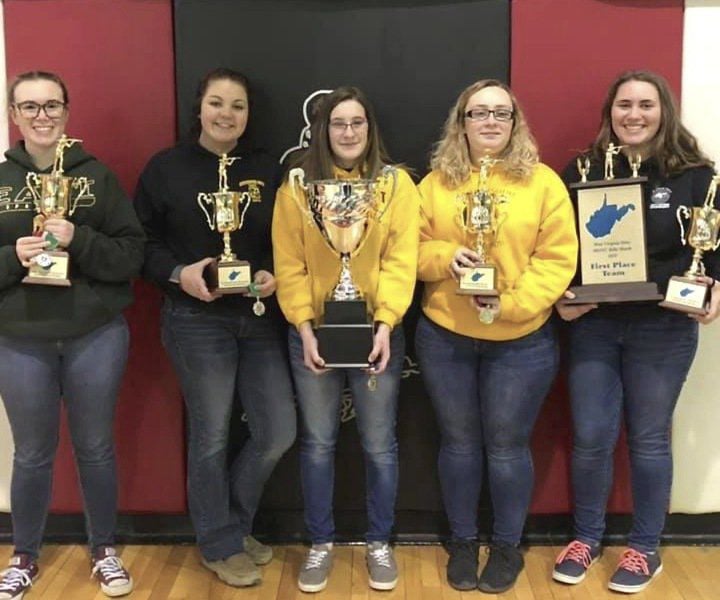 Alissa Jones, second from right, holds a trophy she won as a member of her high school's shooting team.

Alissa Jones, center, stands with her father, Norman, left, and her mother, Phyllis, after her high school graduation in West Virginia.

The family of Alissa Jones is awaiting results of an investigation into her death. The teen was killed in a July 2 stemming from injuries she sustained in a crash in West Pittsburg.

Alissa Jones and her family gather for a picture after her graduation. She is wearing glasses in the center of the second row.

Alissa Jones, second from right, holds a trophy she won as a member of her high school's shooting team.

Alissa Jones was a marksman, held a 4.0 grade point average in high school and set lofty goals about going to the university of her choice to study forensic science and criminal justice.

She had graduated May 31 from Greenbrier East High School in Lewisburg, West Virginia, and was the first sibling in her family to aspire to go to college. She applied to dozens of colleges, and because of her high grades and achievements, she had her pick.

Alissa chose West Viriginia Wesleyan University in Buckhannon, where she was accepted with the promise of a scholarship in forensic science. She was eager about getting started in the fall. She had moved back to West Pittsburg for the summer, and was returning home there from a visit June 30 with family and friends in Organ Cave, West Virginia, where she lived during school.

But within seconds, her future came to a tragic end.

As she got out of the car in front of her family's home around 11 p.m. that night and was unloading her belongings in the dark, she was struck by an approaching tractor-trailer. She was left unconscious and bleeding on the pavement as the vehicle drove away and never stopped, never acknowledged her and never called for help. Alissa died from her injuries two days later.

State and New Castle police are still investigating the circumstances surrounding the events of that night. The presumed driver, or owner, of the tractor-trailer is facing a civil lawsuit filed by the Jones family, based upon a separate investigation conducted by the law firm of Dallas W. Hartman.

According to an account given by Alissa's sister, April, the Jones family car had parked about 15 feet from their West Pittsburg home at 241 Center Ave., and April, and her two daughters — Alissa's nieces — had gone inside the house about 30 seconds earlier.

When April heard the crash, she ran back outside.

She found her younger sister lying on the pavement and the tractor-trailer speeding away. She called 911, she said, and the first on scene was Taylor Township fire chief David Allegro, who administered life-saving measures.

"I asked him to get us a helicopter," April said. "They landed it at the Taylor Township swimming pool."

Alissa was flown to St. Elizabeth's Youngstown Hospital. The Jones family drove by car, arriving before the helicopter did. There, they sat in a waiting room with high anxiety for several hours until they finally were able to see Alissa later the next morning.

Alissa lay unresponsive in a coma in the hospital's intensive care unit for two days, until, after conferring with the doctors, her family resolved on July 2 to have her life support system removed and they said their final goodbyes.

Norman Jones is quiet man whose eyes mirror deep sadness. He stares silently at his lap when the subject comes up of his daughter and that horrifying night. April is family's strength as she talks, at first with reserve, about those three traumatic days. It's only when she talks about her sister's life, her achievements and goals and their closeness that she opens up like a flower to share about how Alissa lived.

To 28-year-old April, 19-year-old Alissa was so much more than just her younger sister. They shared a close relationship.

"She was my best friend. We did everything together," she said, including that last trip to West Virginia.

Alissa was born June 7, 2000, to Norman Jones and Phyllis Whitlock Jones. She had two brothers, Joseph Jones and T.J. Morgan, and in addition to April, her sisters were Heather Jones, Cheyenne Morgan and Cody Morgan.

April holds onto her sister's memory with a scrapbook that Alissa had made of her achievements.

"She wanted to be an EMT," April said.

Alissa's extracurricular interests included FFA and Junior ROTC, of which she was a member for years. She had worked at Dollar General in West Virginia, which was owned by family members. She had won various awards for school spirit and academics.

Alissa had ranked fourth in a state shooting match for the Greenbrier East High School team.

She had compiled a list of things she wanted to do before she was 30 years old. That list included getting a new car, moving to Pennsylvania, starting college, visiting Australia and going skydiving.

"She had so many things she wanted to accomplish. She wanted so hard to succeed," April said of her sister's ambitions, "but her biggest goal was getting into college. She was so proud of herself. She worked constantly."

April had a difficult year in 2018, having undergone a liver transplant last November. Alissa helped her through it, taking time time off school for about a month to take care of April at home. Alissa continued with homebound instruction during that time to keep up her 4.0 grade point average, then she finished her senior year in West Virginia.

April believes it was her transplant that influenced Alissa to sign up to become an organ donor. Upon her death, Alissa's eye tissue was donated to a cornea transplant recipient in Danbury, Connecticut. The process is still unfolding to where the recipient gets to meet the donor's family, April said.

In the aftermath of Alissa's death, the Jones family has found themselves surrounded by love and support from their community.

"So many people have done what they can to help, coming around and checking on us," April said. Some things are in the making that are designed to help the family continue with its healing.

"It's just been so nice that people have reached out to us through social media," Norman Jones said, "people we don't even know. I'm not a big Facebook person, but I read through a lot of the comments."

He pointed out that one woman baked 150 pepperoni rolls and sold them to benefit the family.

"I'm just trying to do what Alissa would have wanted," he said. "She wouldn't want me to sit in a corner and just grieve."

He and April pointed out that the family also gets a lot of support from family and friends in West Virginia, who put on a celebration of life for Alissa at her former school. Youths who knew her and their parents attended, and teachers and friends spoke and told stories about how they remembered her. Until the West Pittsburg side of the family attended, they didn't realize the warmth and compassion that was out there for them, through his late daughter's connection, Norman said.

A group of women from New Castle have come together to host a Syrian Food fundraiser later this month, and one of them also is selling t-shirts to buy teddy bears for the police to give to abused children. The bears will have a tag that reads, "a hug from Alissa."

"They're all complete strangers," April said.

But the question still hangs out there, what about the truck driver who sped down Center Avenue that night and hit Alissa?

Attorney Dallas M. Hartman — son of the firm's owner, Dallas W. Hartman — has filed a civil lawsuit on behalf of the Jones family, which is pending in the Lawrence County Court of Common Pleas. The case is against Robert L. Hodge and several firms related to the company for which Hodge was working at the time of the accident. The lawsuit paperwork points to Hodge as having been the driver for the company that owns the truck that struck Alissa.

New Castle police chief Bobby Salem said Wednesday his investigators are still waiting for findings from a state police reconstruction team about the accident. He anticipates a meeting with the state police sometime this week to discuss the details of their findings, he said.

Salem pointed out that the case has a lot of different dynamics to it than a normal accident would, because a death was involved. That includes the fact that the driver left the scene, he said, so such a delay is not unusual.

"We've been in contact with the state police all along," he said, adding that whenever an accident involves a death, the reconstruction investigation can take several months.

Bruce L. Drotleff Sr., 64, of Slippery Rock Township passed away unexpectedly on Thursday, March 19, 2020, at his home from an apparent heart attack.