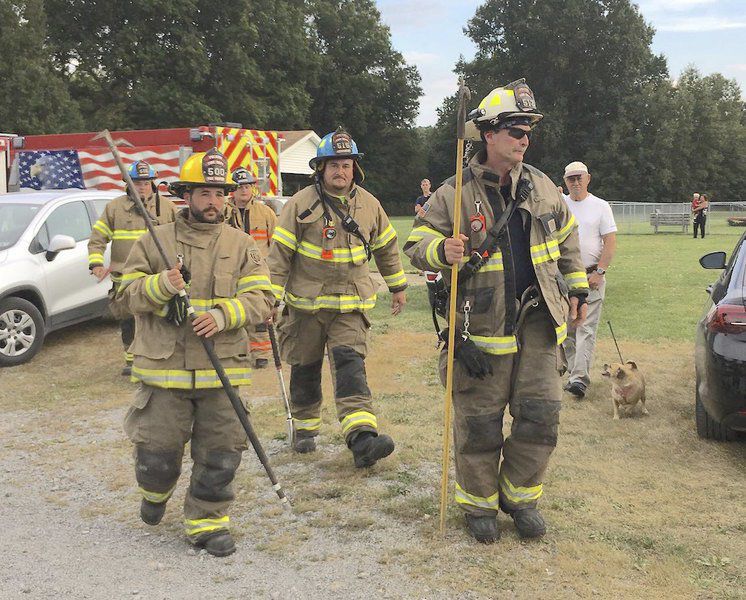 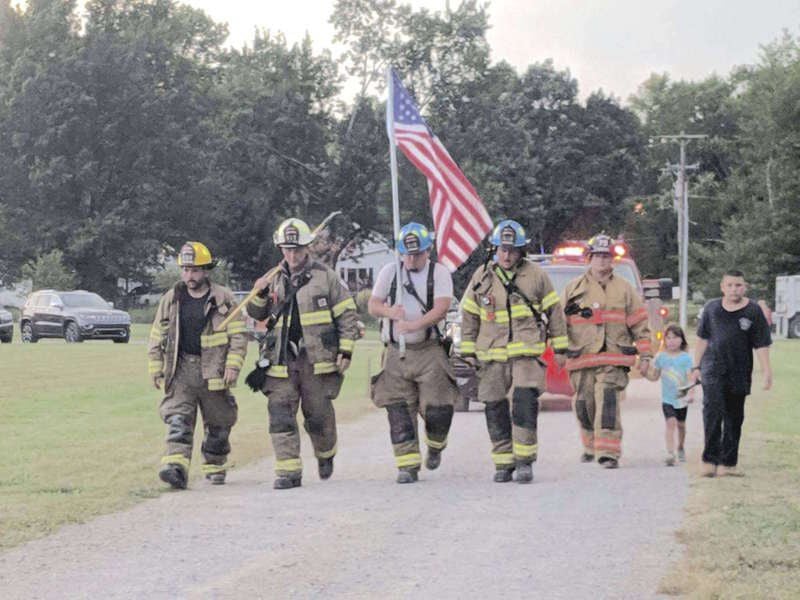 Five very tired volunteer firemen in full fire fighting gear brought up the rear at the Second Annual First Responders Remembrance 5K Walk/Run last night. The firemen, from left, Randy Rodgers, Keith Stowe, Justin Stafford, with flag, and Greg Houlette all of Pulaski Township, and Brock Janoski of the Shenango Township/Mercer County volunteer department participated to honor the firemen, police, EMTs and others who died in the Sept. 11, 2001, attack  in New York City and Washington D.C. when terrorists flew planes into the Twin Towers of the World Trade Center and The Pentagon and a field in Shanksville.

Five very tired volunteer firemen in full fire fighting gear brought up the rear at the Second Annual First Responders Remembrance 5K Walk/Run last night. The firemen, from left, Randy Rodgers, Keith Stowe, Justin Stafford, with flag, and Greg Houlette all of Pulaski Township, and Brock Janoski of the Shenango Township/Mercer County volunteer department participated to honor the firemen, police, EMTs and others who died in the Sept. 11, 2001, attack  in New York City and Washington D.C. when terrorists flew planes into the Twin Towers of the World Trade Center and The Pentagon and a field in Shanksville.

"That was the day I became a fireman," said the lieutenant of the Pulaski Township Volunteer Fire Department. "I was 16. I decided right then that I would be a fireman. I was voted in (to the department) that night."

He is still affected by the heroics witnessed on the day 18 years ago when terrorists flew two airplanes into the World Trade Center in New York City, a third plane was crashed into the Pentagon and a fourth plane destined for Washington, D.C. crashed into a field in Shanksville.

Last night, Stafford and three other Pulaski fire fighters, plus a volunteer from the Shenango Township, Mercer County fire department, a mutual aid fire department that assists the Pulaski Township department, joined 55 others who stepped off in the Second Annual First Responders Remembrance 5K Walk/Run.

With temperatures still hovering in the mid-80s, the runners turned out in shorts and tank tops. Walkers, some accompanied by their dogs, wore t-shirts.

But the five firemen were decked out in 60 pounds of full fire fighting gear, including helmets and were carrying fire fighting tools.

"You add another 10 to 15 pounds if you're wearing an air pack," Stafford said, "and another eight to 10 pounds depending on what tools you carry."

Stafford, who wanted to wear an air pack, too, was voted down by the others, carried an officer's axe. Assistant chief Keith Stowe carried a pike pole, used for bringing down walls and ceilings, Randy Rodgers carried a New York Hook, similar to a pike pole but shorter, and Greg Houlette carried a Halligan pry bar used for breaking locks, forcing entry and knocking down walls.

Joining them, also in full gear, was Brock Janoski from Shenango Township, Mercer County Station No. 79. Other fire fighters participated by controlling traffic along the 3.11-mile route along Evergreen Road.

"We won't be setting any speed records," one of the volunteers said jokingly.

The five men made the finish line in about 1 hour, 15 minutes, and having picked up an American flag along the way.

Stafford said participating in the Remembrance event, "is what I can do to honor the 343 New York firemen who died that day and the eight paramedics, 60 police officers and 23 port authority workers."

The Walk/Run was organized by Kathy DeVite Perry, a member of the Pulaski Volunteer Fire Department Auxiliary, and her brother, Andy DeVite, a Gulf War veteran. She said 25 preregistered and a total of 60 participated in the event, including 12 first responders spanning EMTs, veterans, firemen and police.

DeVite thanked participants and sponsors and joked that he even arranged a fly-over as a flock of Canada geese took to the air as runners were still organizing.

DeVite said he remembered where he was when the 9/11 attacks took place. His wife was pregnant.

"I asked myself 'What kind of world are we bringing a child into? One filled with terrorists?' But the longer I thought, I realized we were bringing her into a world of heroes, patriots and selfless police, firemen, EMTs and good citizens," DeVite said. "People lined up to give blood. They went to church and prayed for victims and their families. Men and women went to military recruiters and signed up.

"In the weeks that followed 9/11, we felt patriotism. Don't ever forget that."

He added that children born after Sept.11, 2001, "Never knew a time when the United States was not at war."

Children born that year, he said are turning 18 this year.

"It is up to them to become the firemen and police, to sign up for the military. We must learn lessons from our past and go out and get involved. Join fire departments and auxiliaries, give blood, visit people in nursing homes, shovel a neighbor's driveway. Do what you can to improve. Show your pride, patriotism and civic duty. Honor those who have gone."

James L. Anderson of New Castle passed away in Orlando, Florida, on Feb. 21, 2020. Visitation will be 2-4 and 6-8 p.m. on Tuesday at R. Cunningham Funeral Home Inc. Complete obituary announced Tuesday.

Eugene Michael Ross Sr., 74, of Edinburg passed away the morning of Feb. 21, 2020. Eugene was born on March 22, 1945, in New Castle. He was a son of the late John and Marie (Harding) Ross. Mr. Ross was married to the former Becky Magusiak. They were married for 54 years. Eugene was a graduat…