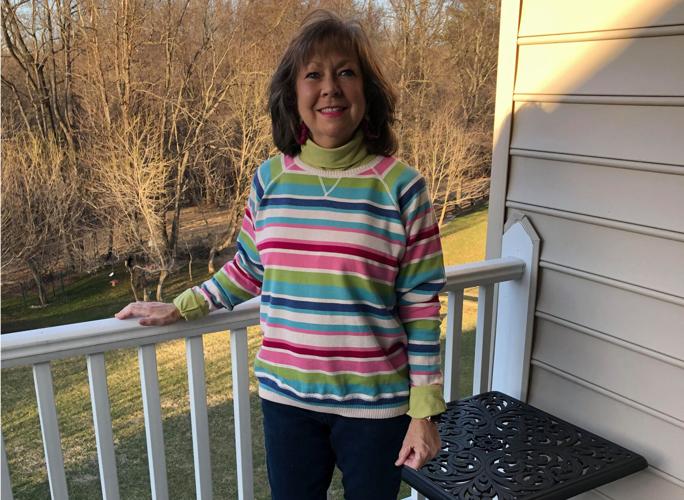 Lauren Schuler was part of an FBI Evidence Response Team that investigated the 9/11 Pentagon crash site. Sixteen years later, she was diagnosed with a blood cancer linked to the toxins she encountered there. 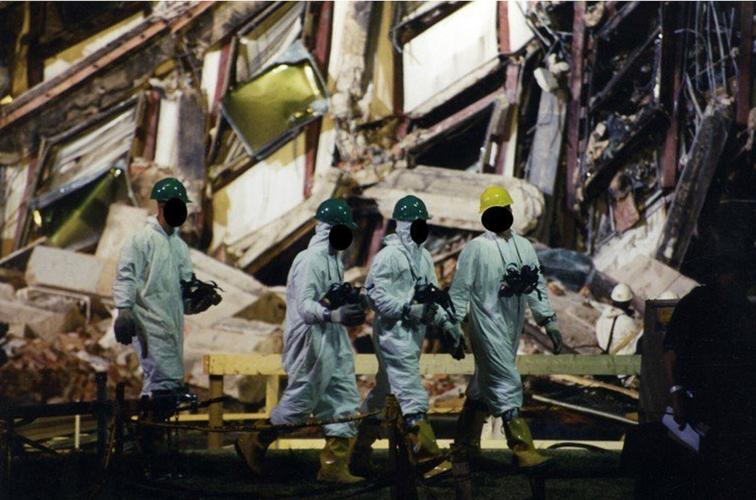 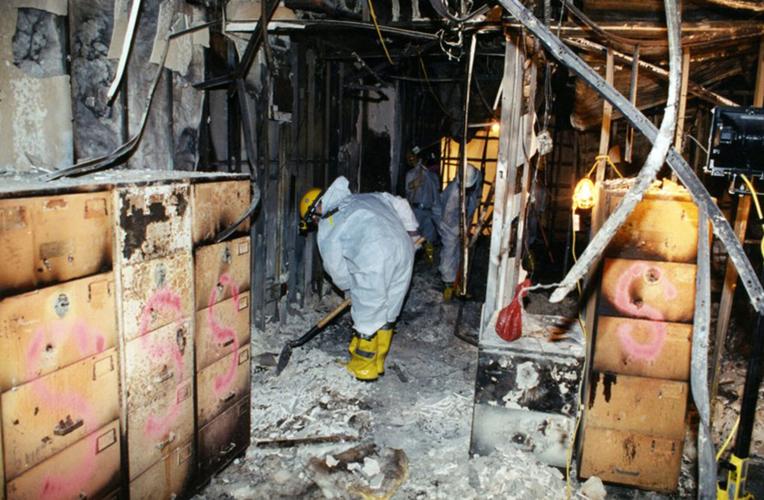 In March 2017, the FBI re-released several rarely seen photos of the 9/11 attacks against the Pentagon in Arlington County, Virginia. Above, a very normal office building filled with filing cabinets was reduced to twisted metal and ashes, with only the cabinets themselves left standing 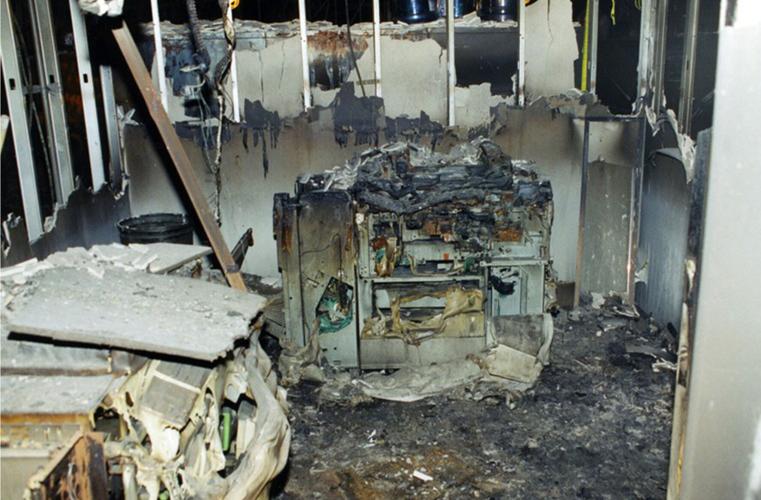 In March 2017, the FBI re-released several rarely seen photos of the 9/11 attacks against the Pentagon in Arlington County, Virginia. The photos were first released to the public in 2011, but disappeared from the public record due to a technical glitch. Above are the remains of what appears to be an office copy machine.

Lauren Schuler was part of an FBI Evidence Response Team that investigated the 9/11 Pentagon crash site. Sixteen years later, she was diagnosed with a blood cancer linked to the toxins she encountered there.

In March 2017, the FBI re-released several rarely seen photos of the 9/11 attacks against the Pentagon in Arlington County, Virginia. Above, a very normal office building filled with filing cabinets was reduced to twisted metal and ashes, with only the cabinets themselves left standing

In March 2017, the FBI re-released several rarely seen photos of the 9/11 attacks against the Pentagon in Arlington County, Virginia. The photos were first released to the public in 2011, but disappeared from the public record due to a technical glitch. Above are the remains of what appears to be an office copy machine.

Twenty-four hours after airliners crashed into the World Trade Center, the Pentagon and a remote field in Shanksville, Lauren Schuler became a 9/11 investigator.

Now retired, Schuler was an agent in the FBI’s Baltimore Division on Sept. 11, 2001, part of its Evidence Response Team. She and others were dispatched to the Pentagon, where on Sept. 12, 2001, they began probing the section of the facility that had been destroyed when terrorists flew American Airlines Flight 77 into it, killing all 64 aboard and 125 others in the building.

Schuler — who will be speaking in a 1 p.m. observance Sunday at the Briar Brook Barn in Eastbrook — spent just five days combing through the wreckage on 12-hour shifts before being reassigned to Dover Air Force Base, where human remains were being taken for processing and identification.

But it was enough to threaten her life a decade and a half later when she was diagnosed with multiple myeloma, a blood cancer that also ravaged her kidneys, requiring her to receive a transplant.

And Schuler is not alone.

According to a report published by Cambridge University Press on the 20th anniversary of the terrorist attacks, more than 91,000 first responders were exposed to a range of toxic health hazards during 9/11 recovery and follow-up operations. By March 2021, 80,745 of them had enrolled in the World Trade Center Health Program, which provides medical monitoring and treatment for 9/11-related health conditions experienced by that day’s first responders and survivors (the CDC now puts the number at more than 118,000). At the time of the March 2021 report, 3,439 of the responders enrolled in the program had died.

That’s more than the 2,977 lives lost in the attacks themselves, and includes 18 FBI employees.

“While I would never minimize what happened on that day, the way people were killed so heartlessly by those terrorists, I just have to say that the number of people who have died since is many more,” Schuler said. “I don’t want those people to be forgotten. I don’t want the 18 employees of the FBI who died from their illnesses to be forgotten.”

Schuler believes she was prepared for the emotional challenge of investigating the Pentagon crash site. Less than two years prior, she had been part of the FBI team dispatched to a position on the Atlantic Ocean, 60 miles south of Nantucket, where EgyptAir Flight 990 had gone down, killing all 217 aboard.

“That was a difficult scene,” she said. “We were out on a salvage ship with all of the items being pulled up on the back, and we had to hose them down through a sieve, then go and pull out whatever evidence we found — plane parts, human remains, personal effects and so forth.

“So I had already seen difficult things, I’d been to multiple autopsies. So on 9/11, the things I saw, they weren’t new to me.”

What she and her fellow investigators weren’t prepared for, though, were the toxic chemicals infusing the ground and air in and around the Pentagon.

These included carcinogens from the dust of construction materials as well as benzene, a component of jet fuel that has been linked to blood cancer.

“For the first two or three days, we had very little protective equipment,” Schuler recalled. “We did have masks, like the thin masks that we wear today against COVID. But we didn’t get respirators until probably the third day.

“We didn’t have any protective coveralls or anything over our clothes for the first couple of days. I think we had protective glasses and helmets and long rubber gloves.”

Shuler also had two pairs of boots, one waterproof, the other not. On the day her team was assigned to walk through the area where the nose of the plane had come to rest, she was wearing the latter.

“I didn’t have my waterproof boots on that day, thinking we’d only be going inside so far,” she said.

“But with all the firefighting equipment, the hoses putting out the fires, there were several inches of water on the ground. The water, of course, was infused with all the jet fuel, the chemicals, dust and human remains.

“I was thinking to myself, ‘This can’t be really good,’ but what are you going to do? I couldn’t say, ‘Wait, I’ve got to go get my other boots.’ You’ve just got to go with it.”

Schuler also had to reach into the murk to pull up items from the ground, and the chemically infused water would sometimes seep over the top of her rubber gloves, touching her skin.

Moreover, she recalled, when her team would come out of the building, they would take off the masks they’d been wearing inside.

“We didn’t understand for the most part that we should have been wearing the masks the entire time we were there, even when we were traveling back to our motel, because the air all around the Pentagon was filled with the chemicals from the jet fuel and the asbestos and the plane,” she said. “That was unfortunate that we didn’t understand that. Nobody did.”

“I didn’t worry,” she said. “I didn’t know enough to worry. Looking back, I guess I thought that the longer the time period went on, the less the risk would be. But in fact, that’s actually quite the opposite.

“I knew of people who were getting sick with a variety of different cancers. We had an agent in our office who had leukemia, and he passed away from that. He had actually worked on an assignment near the Pentagon. He wasn’t on the Evidence Response Team. He fought leukemia for many, many years before losing his battle.”

Eventually, Schuler would also learn of others with lung cancers that had metastasized, and some with respiratory ailments.

“There are, I’m told, over a hundred that are sick with various levels of illnesses. You name it, people have been diagnosed with it.”

Schuler never thought she’d be one of them. Sixteen years later, though, she realized she’d been wrong.

(Friday: Lauren Schuler is diagnosed with multiple myeloma linked to her 9/11 service and begins a long, difficult road back to health).

(This article has been edited to indicate that the event takes place on Sunday, Sept. 11. Th…

Eventually — in January 2017 — now-retired FBI agent Lauren Schuler would be told that she had developed multiple myeloma, a blood cancer spawned by the toxins to which she had been exposed during her investigation of the Pentagon crash site on 9/11.