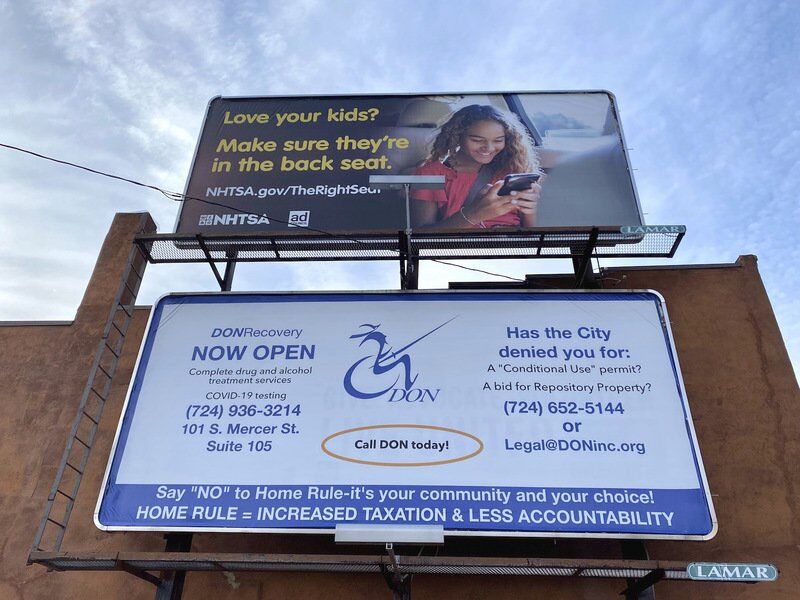 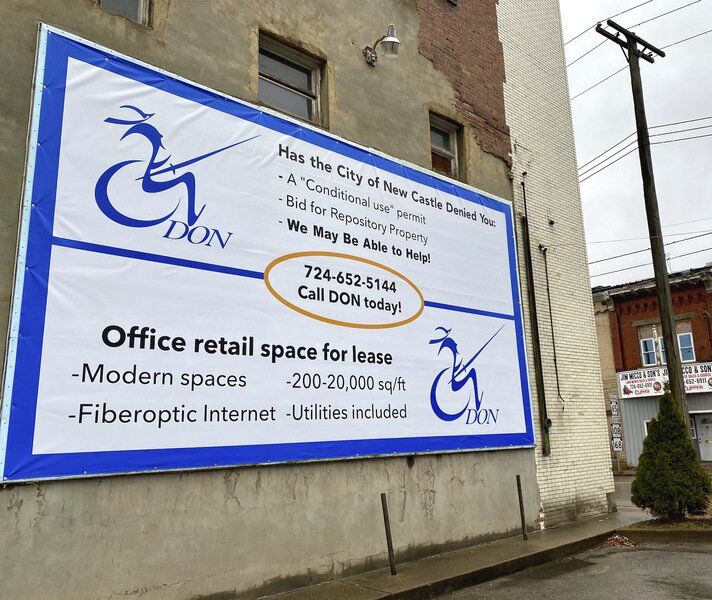 One of the boards on East Washington Street advertises three different matters — the recent opening of its outpatient drug and alcohol rehabilitation center, legal services for residents denied a repository property or conditional use request and claiming a Home Rule charter would increase taxation and create less accountability.

“In accordance with DON’s mission, DON strives to improve the lives of people and the communities of New Castle and Lawrence County,” DON attorney Phillip Berezniak said in a statement.

The billboard, however, appear to fail compliance with campaign advertising rules after council president Tom Smith reached out to Lawrence County elections director Ed Allison. Allison said he contacted the agency to address the “advertisement deficiency” and also advised it must file a campaign finance report for “their effort to influence a ballot issue.”

Sue Linville, Home Rule commission chairwoman, encouraged the public to review the charter when it is finished, saying it creates a “more efficient, transparent and cooperative government” and prevents the state from taking over once the city exits Act 47 status.

“The new charter will give us greater taxing flexibility, which will help keep property taxes from increasing,” Linville said.

Earned income tax has been collected at a higher rate since the city entered Act 47 in 2007 in order to create more revenue. Once the city exits the act in 2024, the tax rate must come back down, creating a multimillion dollar revenue hole. City officials are tasked with finding reoccurring revenue to replace the tax if the charter is not adopted.

Previously, the city’s Act 47 coordinators expressed belief the city will enter receivership after exiting Act 47 if a charter is not adopted. Linville added the commission is scheduling public meetings to educate residents about the charter as well as answer questions. The commission also holds bi-monthly public meetings.

Two other billboards, which went up days prior to Thanksgiving on the Clark’s Furniture building, offer legal services to residents who have been denied a conditional use request or bid for repository property from the city council. DON Recovery Services was denied a conditional use request to open an outpatient drug and alcohol rehabilitation facility in the Central Building in July, but won a legal challenge in court and opened its doors on Jan. 4.

Mayor Chris Frye called DON Services “an asset to the community in many ways” and that “their methods of advocacy are unorthodox, but necessary.”

“I believe they’re doing this with good intentions to make New Castle government function better and help the broader community,” Frye said. “Therefore, I can’t disagree with them. I ran for office to bring real change to city government, they seem (to) be making a similar statement.”