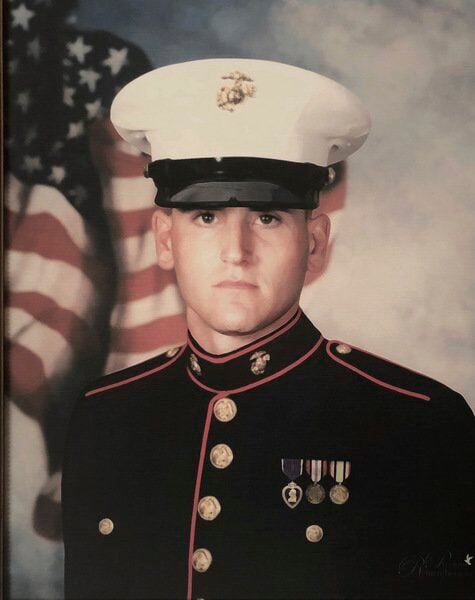 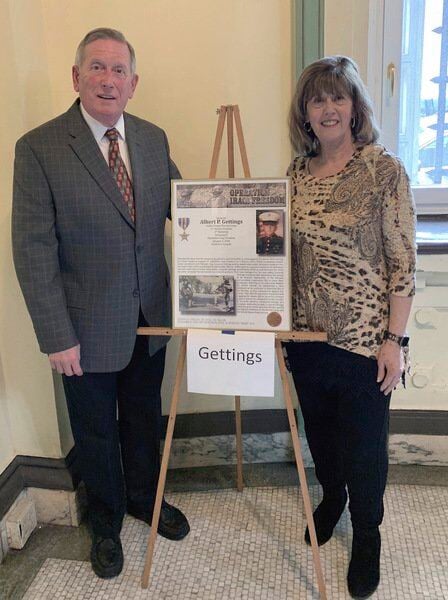 David and Julie Gettings, parents of the late Marine Cpl. Albert P. Gettings, stand with the poster created for their son's induction into the Joseph A. Dugan Jr. Hall of Valor at the Soldiers and Sailors Museum in Pittsburgh.

David and Julie Gettings, parents of the late Marine Cpl. Albert P. Gettings, stand with the poster created for their son's induction into the Joseph A. Dugan Jr. Hall of Valor at the Soldiers and Sailors Museum in Pittsburgh.

Fifteen years after Marine Corps Cpl. Albert P. Gettings was laid to rest, he continues to receive posthumous accolades for his valor and sacrifice to his country.

Gettings, who at age 27 was killed in action on Jan. 5, 2006, in Fallujah, Iraq, was one of 11 servicemen inducted March 28 into the Joseph A. Dugan Jr. Hall of Valor at the Soldiers & Sailors Memorial Hall in Pittsburgh.

Gettings was the son of David and Julie Gettings of New Castle. He also is survived by a sister, Cori Gettings, of New York.

He had served in support of Operation Iraqi Freedom and was posthumously awarded a Silver Star for his conspicuous gallantry and action against the enemy while being a team leader, McCarthy said.

The judge read the narrative of Gettings' act of valor during the presentation.

While conducting counter sniper operations in Fallujah, Gettings and his squad came under automatic weapon fire, and an initial volley of fire wounded him and another Marine. Gettings suffered a gunshot would to the abdomen — and while still under direct enemy observation — he immediately stood up and returned fire while other wounded Marines moved to a covered position, McCarthy said.

"With total disregard for his own safety, he remained fully exposed to the enemy as he directed the deployment of his Marines and provided suppressive fire to cover their movement," McCarthy said. "Refusing to be evacuated, despite his severe wounds, he maintained a calm demeanor as he continued to direct fire of his Marines as they maneuvered against the enemy. Only after the squad was in position and engaging the enemy did he move to a covered position, where he collapsed from his wounds.

"By his bold initiative, undaunted courage and complete dedication to duty, Cpl. Gettings reflected great credit upon himself and upheld the highest traditions of the U.S. Marine Corps and the U.S. Naval Service," McCabe said.

The hall of valor is the only memorial of its kind in the country, because of who and how it honors Pennsylvania veterans from all branches of service and wars, said John McCabe, CEO and president of Soldiers & Sailors in Pittsburgh.

The hall of valor has evolved over 40 years into recognizing veterans from all over Pennsylvania from the Civil War through the present. In 2006 it was ceremoniously named in memory of Joe Dugan, the first president of the nonprofit organization.

"The hall is full of ordinary people who have done extraordinary things," McCabe said.

Gettings noted that most of Sunday's other inductees had fought in World War II or Vietnam.

"Those are the kinds of things where, within a 50-mile radius, western Pennsylvania is well represented," Gettings said of the Soldiers and Sailors Museum and the hall of valor. "They do a fantastic job. If you've never been to Soldiers & Sailors, it's worth going. It's an  amazing facility that does honor to our military veterans.

"We are all so proud of Albert and we thank John McCabe and his staff for their efforts," he said.