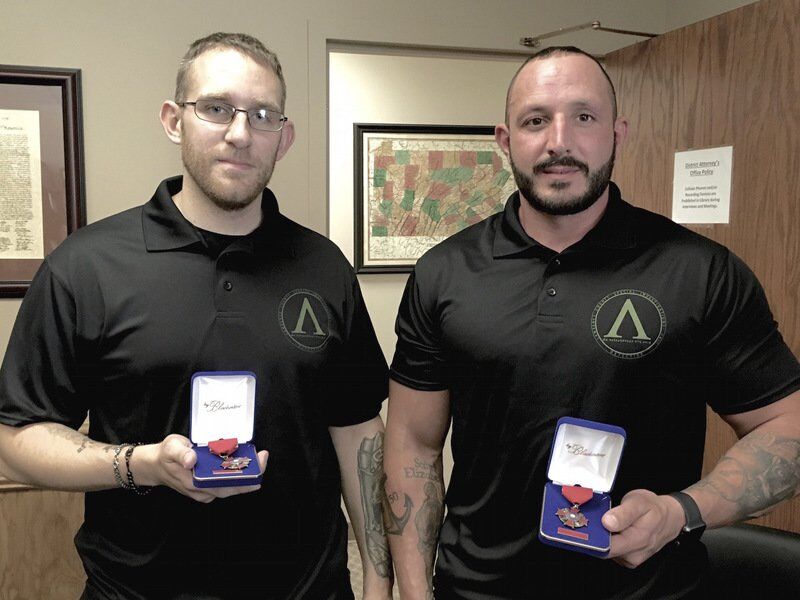 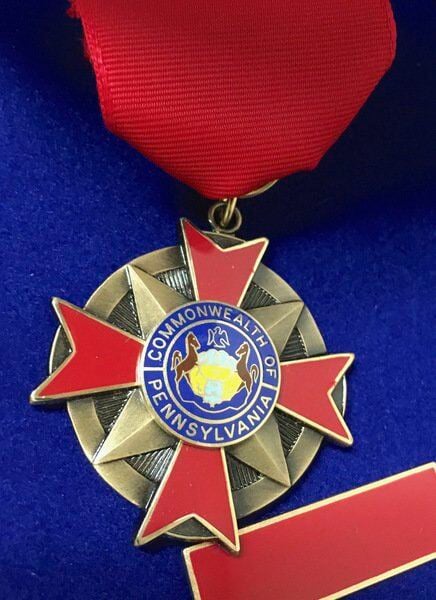 A up-close look at the Commonwealth of Pennsylvania District Attorney’s medal.

A up-close look at the Commonwealth of Pennsylvania District Attorney’s medal.

Just a few days after 13 people were arrested for an international narcotics trafficking operation that had roots in New Castle, two Lawrence County narcotics officers received recognition for their outstanding work throughout the year.

The award is given once a year to police officers who display sustained excellence in performance and professionalism, Lamancusa said, adding that that because officers like Ryhal and Piche, “our department has really evolved.”

“I’ve always believed that narcotics and code enforcement are the two organizations that can actually change a community,” Lamancusa said.

The district attorney said he conferred with New Castle police chief Bobby Salem about the state of narcotics policing in Lawrence County, and they concluded that they had to focus on developing narcotics officers who can work effectively individually, but who also can effectively serve as part of a team.

“We began focusing on individuals we wanted to develop, who all possess all the qualities for becoming a great narcotics officer,” he said, noting that what stands out about Ryhal and Piche “is their drive.They are the men whom you build a unit around.”

Ryhal, 38, has been working a New Castle police officer since 2006. He joined the drug task force in 2012 and moved full time into the narcotics unit in 2014. A New Castle High School graduate, he graduated from the Indiana University of Pennsylvania’s police academy in 2004.

Piche, 35, had been a patrolman with the New Castle police for nine years, during which time he was part of the drug task force. He became a narcotics officer in the district attorney’s office full-time in 2019. Piche is a graduate of the Beaver County municipal police academy.

Both Piche and Ryhal were among the many officers who participated in a federal narcotics raid earlier last week, when 13 people were taken into custody as high-level dealers in a major operation that stretched from Mexico, Puerto Rico and Florida to Ohio, New Castle, Farrell and Sharon and involved four suspects who are from — or had previous residency in — New Castle.

Among those arrested was Bruce McKnight, 53, of Columbus, formerly of New Castle, who authorities say played a lead role in the sales of heroin, cocaine and fentanyl. U.S. Attorney Scott W. Brady, who staged a press conference in New Castle the day after the arrests, said McKnight and his associates are accused of distributing five kilograms or more of cocaine and more than 40 grams of illicit fentanyl across Pennsylvania.

“This was a significant international operation,” Brady said. “The price of cocaine during COVID might be $40,000 a kilogram, so we’re talking about millions and millions of dollars coming out of this region, going to back through Columbus to Florida, Puerto Rico and Mexico.”

Others arrested in the sweep were from Farrell, Sharon, Mexico, Kissimmee, Florida, and Columbus, Ohio. They all are in federal prison awaiting trail.

The Lawrence County District Attorney’s Drug Task Force and Special Investigative Unit played a major role in the investigation, along with the New Castle, Sharon and Farrell police departments, the state police, the state Office of the Attorney General, the federal Drug Enforcement Administration bureaus in Pittsburgh, Columbus and Orlando, Florida, the Postal Service Office of the Inspector General, Homeland Security Investigations and the Internal Revenue Service.