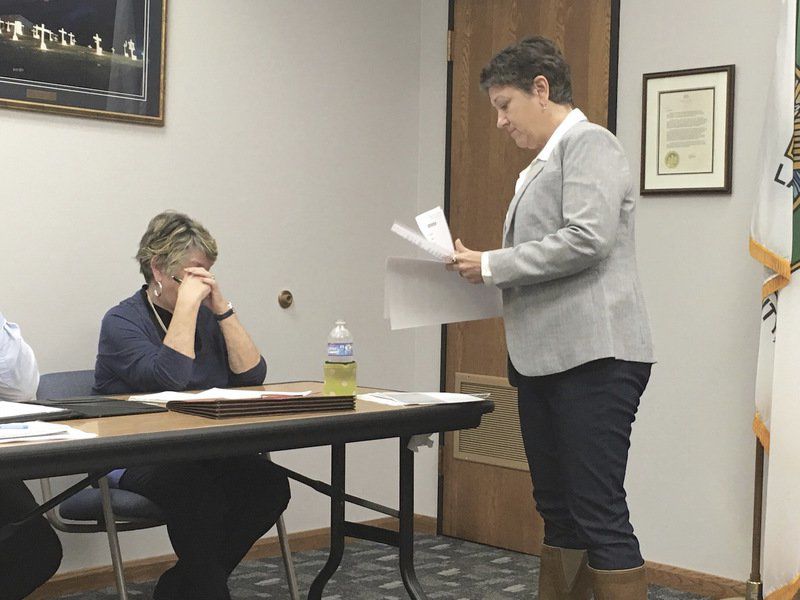 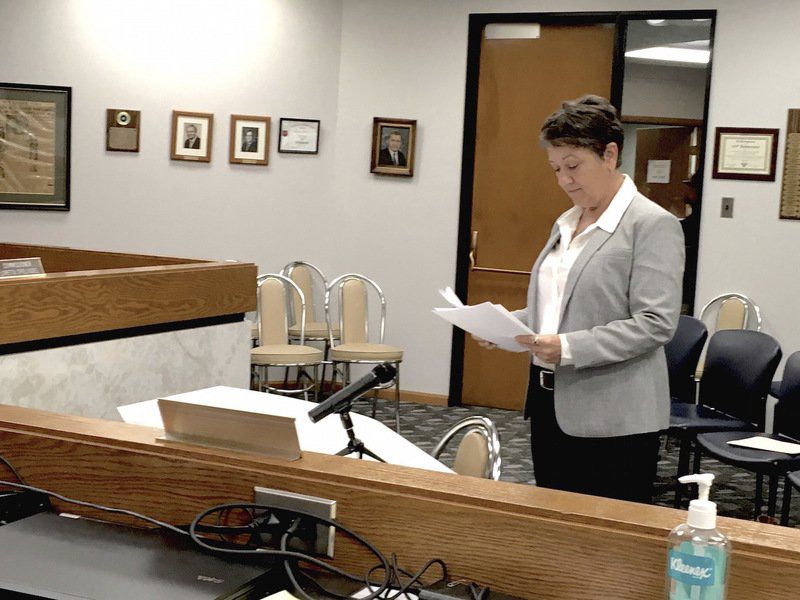 Carrie Hahn addresses the commissioners, asking for copies of the previous meeting minutes before their adoption.

Carrie Hahn addresses the commissioners, asking for copies of the previous meeting minutes before their adoption.

Tuesday marked the fourth time since the new commissioners were sworn into office in January that a member of the public has taken the board to task for not providing copies of minutes from the previous meeting before they are adopted into record.

Carrie Hahn, a Wilmington Township resident, again asked during the public comment period of the meeting if she could see a copy of the minutes from the previous Tuesday's public meeting. She pointed out that the minutes adopted at last week's meeting had no reference to her having spoken at the previous meeting, nor did it mention a man who was in the audience who had made a comment, but the minutes were adopted before the public could see them. She asked them to enter those matters into the minutes.

Commissioner Chairman Morgan Boyd responded of Hahn's request to see the minutes, "The answer is the same as it's been, that we're looking into that."

Boyd said the commissioners are abiding by the advice of county solicitor Thomas. W. Leslie.

Paula Prentice of Mahoning Township asked the commissioners what the proper procedure is for requesting the minutes of the meetings, stating she believes she has tried to receive copies of the minutes in the township.

Boyd said the commissioners interpretation of the Right to Know Law and the Sunshine Act, based on the solicitor's advice, is that they are not required to give anyone the minutes of the meeting until they are approved.

"We are not opposed to giving the public all access to voting documents before they are approved," he added. "It's just a process, and we're working on it."

“Neither the Sunshine Act nor the Right to Know Law have any provision requiring that the agency stop in the middle of its meeting to provide copies of the proposed minutes of the last meeting, either before or after they have been approved,” Leslie wrote.

Melissa Melewsky, media law counsel for the Pennsylvania NewsMedia Association, in an email last week cited section 708 (b) (10) of the state's Right to Know Law, which requires public access to records presented to a quorum for deliberation at a public meeting.

Commonly known as the board packet provision, that part of the law is intended to put the public and elected officials on the same page during public meetings so the public can read the records being discussed and offer public comment on them before the vote takes place, she wrote.

The Pennsylvania Sunshine Act requires an opportunity for public comment prior to all official action, but the public can’t exercise that right in a meaningful way if it doesn’t have access to the records being voted on, Melewsky said.

The Right to Know Law board packet provision seeks to address that situation by making records discussed and acted upon at public meetings public records, she wrote.

Melewsky had suggested that the agency post a copy of board packet materials on its website before its public meetings and have hard copies available at the meeting for anyone interested in the issues being discussed.

Hahn stood up and objected during the voting session of the commissioners meeting when the board was preparing to vote to approve the minutes from the Jan. 28 meeting.

Boyd told her that she did not have a right to interrupt the voting part of the meeting, and that is why the commissioners allow for public comments at the beginning and end of their meetings.

He said after the meeting, "We have been here less than a month, and we're putting out a lot of fires now. We're working on transparency. We're making strides to make county government more accessible and more transparent to all of our residents."

Another county resident dies of COVID-19, the fourth death in a week

Iris Grandey, 73, of New Castle died Aug. 8, 2020. There is no service. Arrangements are by Ed and Don DeCarbo Funeral Home, 941 S. Mill St. Online condolences may be offered at www.decarbofuneralhome.com.

Mary S. Curry, 94, of New Castle passed away the afternoon of Aug. 8, 2020, at The Grove in New Wilmington. Born on March 4, 1926, in New Castle, she was a daughter of the late Louis and Louise DiLello Cioppa. Mary was married to Richard Curry for 46 years. He preceded her in death on March …