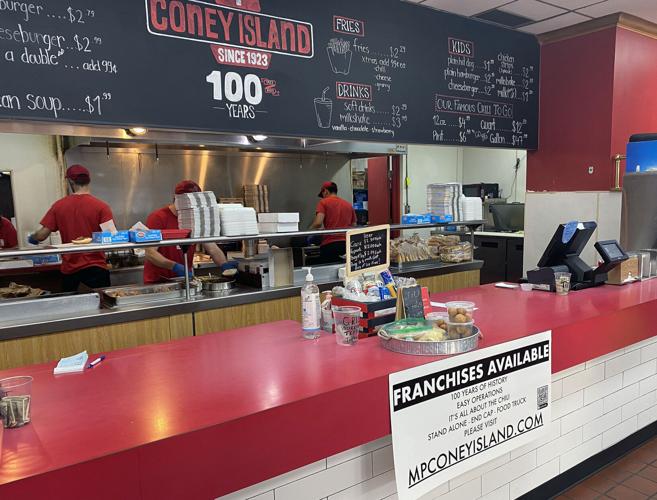 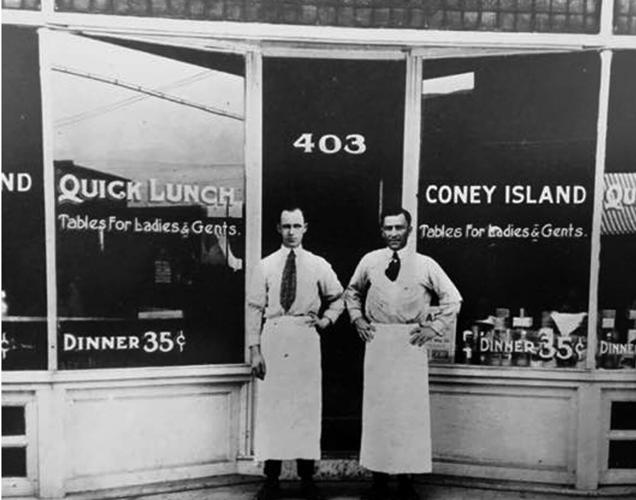 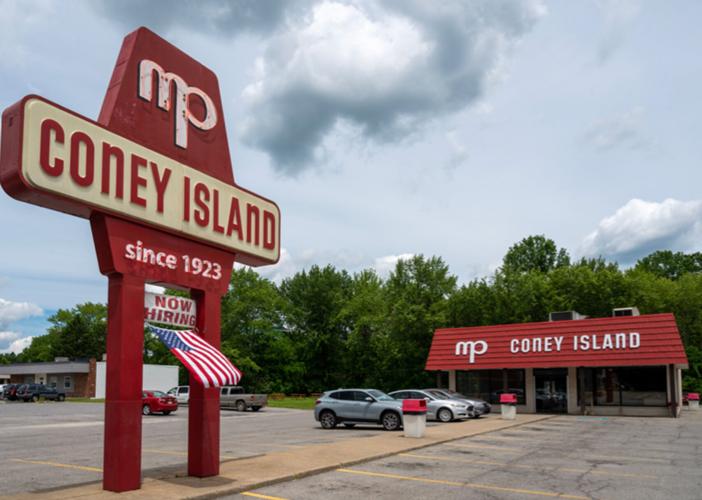 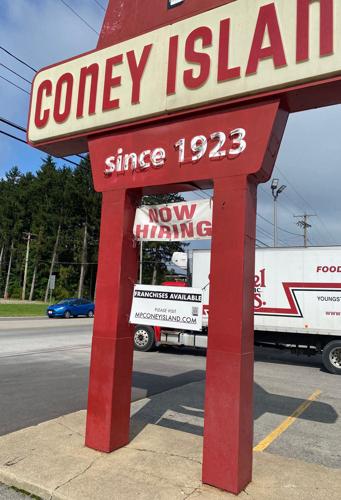 A recent addition to MP Coney Island's sign in Neshannock Township informs customers and passers-by that franchises are available for the first time in the restaurant's 99-year history. 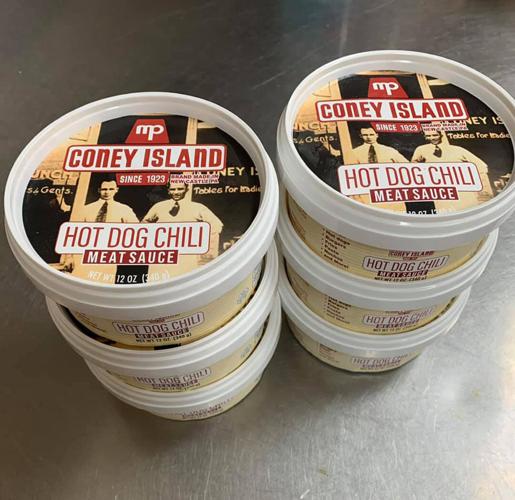 MP Coney Island has expanded its reach by selling its iconic chili sauce wholesale to local stores. Now, the family-owned business is looking to sell franchises.

A recent addition to MP Coney Island's sign in Neshannock Township informs customers and passers-by that franchises are available for the first time in the restaurant's 99-year history.

MP Coney Island has expanded its reach by selling its iconic chili sauce wholesale to local stores. Now, the family-owned business is looking to sell franchises.

This isn’t your grandfather’s Coney Island.

That’s true even for John Mitsos, whose grandfather and namesake was a fixture at MP Coney Island’s downtown store for decades, and whose great-great-uncle was one of the restaurant’s co-founders in 1923.

Mitsos, who spent the last 10 years as a manager of car dealerships, returned to the family business at the start of 2022 as chief operating officer to help oversee a first for the 99-year-old eatery: the selling of franchises.

Launched on West Washington Street in 1923 by Greek immigrants John Mitsos and Chris Papazekos — hence the “MP” in the restaurant’s name — Coney Island and its chili sauce have been an iconic part of New Castle since before the Great Depression. People who have moved away from Lawrence County often prioritize getting a Coney dog on any trip home. Some who can’t make it home even have the sauce shipped to them.

Just a couple of years ago, Coney Island received USDA approval and began selling its chili sauce wholesale. Now, according to Dr. Angelo Mitsos – whose brother, Dr. William J. Mitsos, and sister, Georgia Pouralis, join him to comprise the restaurant’s partnership — “We’re in over a hundred grocery stores in the region.”

With the launch of a franchise initiative, the mission to get Coney dogs to those who don’t live in, or can’t travel back to, New Castle will expand even further around the region, and possibly, the nation.

Coney Island has left New Castle before. Folks may recall seeing a restaurant in Boardman, and another is getting ready to open in Hermitage. These, though, are corporate-owned stores.

“That was my father’s generation,” Angelo Mitsos said of the corporate-owned concept. “The franchising concept is something we’ve thought about for a long time. It gives us the opportunity to expand further.

“We have to do a lot of training, and there’s a systems manual, but it has the potential to grow faster because you’re bringing in some assets from the franchisee as well.”

Angelo Mitsos said that each Coney Island generation has built on the accomplishments of the former.

“Every generation has different talents or abilities to contribute,” he said. “The original founders, they came up with the recipe that we’ve maintained and tried to perpetuate. My father’s generation tried some corporate stores, but they didn’t even accept credit cards. We put credit cards in just a few years ago.

“Now we have DoorDash, and we’re looking for online orders that you can just come and pick up.”

John Mitsos is looking forward to being part of the generation that adds another level to the legacy.

“My grandfather’s and Chris’ generation, they were a little bit more old school and more conservative,” he said. “Even my father, my aunt and my uncle, they haven’t been ones to take anything that’s even remotely risky or outside the lane.

“But what’s happened over the years increasingly, there have been people approaching us and asking certain questions and wanting to do certain things. But beyond that, the impetus that really made (franchising) a no-brainer was my brother initiating getting USDA approval so we could start producing the chili and selling it wholesale. Once we got that and got production rolling, we had an easy way to produce it and to get high-quality, consistent chili to our other stores and franchises.”

The production level will only rise as franchise stores start popping up, John Mitsos said, prompting his family to begin looking for a new production facility already.

“It will probably be somewhere in Lawrence County,” he said. “It could be next to the (Neshannock Township) restaurant; we own the property next door. But it’s very early on, and there’s nothing official.”

Although the Mitsos family’s ties to Coney Island go back a century, they’ve brought in another Lawrence County connection to help get the franchising effort off the ground.

That’s 1977 Laurel High graduate Greg Jones, who went on to be a football star and team captain at Penn State. Nowadays, he’s a marketing partner at JOSHCO Partners in Great Falls, Virginia. The business consults and supports organizations with, among other things, franchise rollouts.

Jones has overseen getting the necessary legal documents in place and worked with the Mitsos family on training manuals and creating a brand and marketing execution strategy. In addition, a franchise sales process and procedures have been established, leaving the actual development component ready to launch.

“That’s the process to go out and find the right people to join the system,” Jones said. “It’s not going to be for everybody, and there are certain requirements that Coney Island needs to become an owner. It’s serious stuff; it’s partnership.”

Typically after launch, Jones said, it takes three to six months after a franchise launch to start seeing traction. The search will begin around western Pennsylvania and eastern Ohio, but Jones does not foresee it being limited to there, despite the fact that Coney Island is not exactly a household name in other parts of the country.

He equates the road ahead to the proliferation of Five Guys, with which he helped.

“Five Guys started out as a hamburgers/French fries joint in northern Virginia, where I’m located,” he said. “I helped them by buying into the system, going to Florida as one of the franchisees to go in there. Everybody kept saying, ‘Who’s going to buy? No one’s ever heard of it. Who’s going to buy burgers?’

“It all comes down to the product. It’s got to be great, and I think Coney Island has a great product.”

“I grew up eating Coney Island dogs forever,” he said. “I can even remember going down to the city location when I was getting recruited for college, sitting in that location with coaches. So it’s near and dear to my heart … helping me equate back to my childhood a little bit and helping a great business with good people grow.”

John Mitsos, of course, also has cherished childhood memories of Coney Island, having grown up amid the family hierarchy. Like Jones, though, that is not the sole reason behind his excitement to start franchising.

“I sound biased because I grew up with it,” he said. “But regardless of that, I believe in the product.”

Moreover, he believes that name recognition in such far-flung destinations as Florida already exists.

“We have an online ordering thing, where somebody can order (the chili) and have it shipped to them anywhere in the continental 48,” he said. “We have the date where these folks are at. It’s crazy, all over the country, tons of people who have moved away – a lot to Florida.

“It’s our hope that when word gets out of what we’re doing, a lot of these people who moved away, they might not be that person who is capable of being a franchise, but they might know someone who is. By getting the word out to those people, that’s how something might materialize in one of those exterior locations.”

That, obviously, would grow the family business, but it would also provide former New Castle residents with a treasured slice of home.

“It’s a win-win,” Mitsos said, “because those folks who don’t live around here any more will have the opportunity to get an MP Coney Island chili dog or chili cheese fries right where they live.”