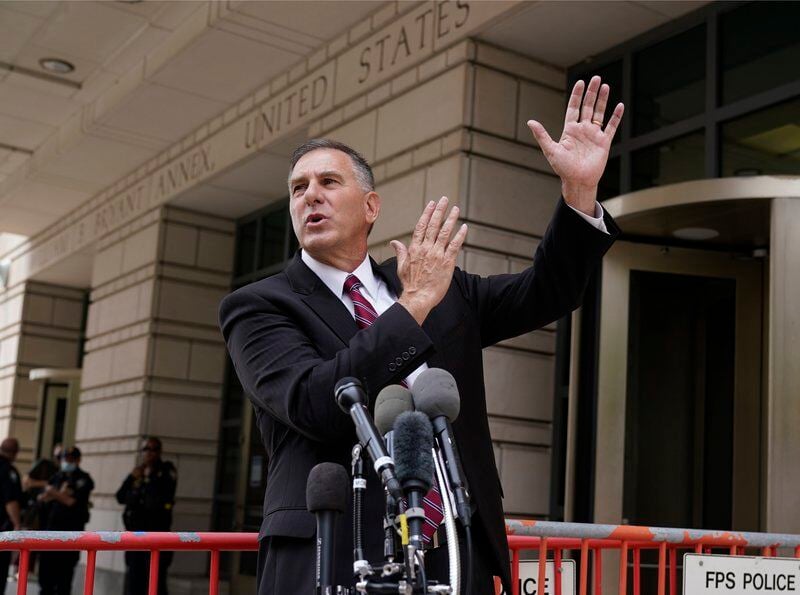 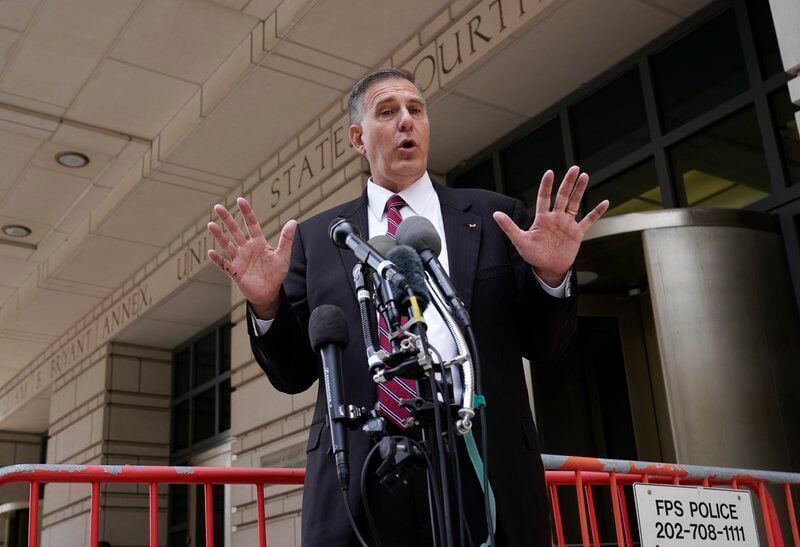 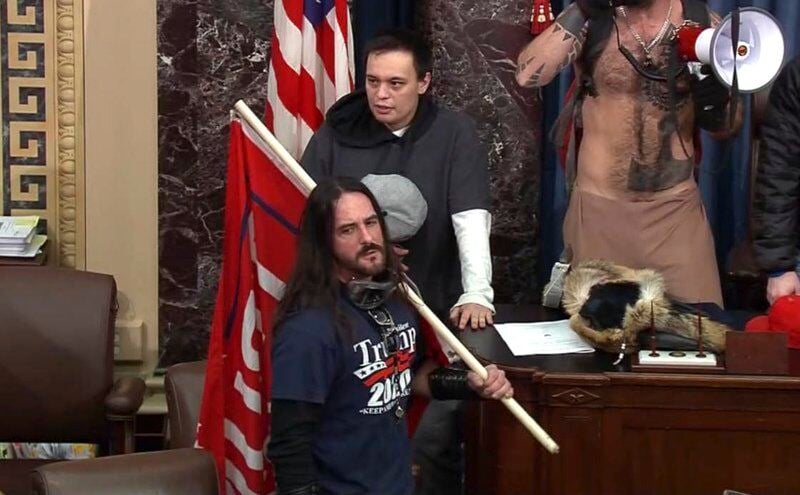 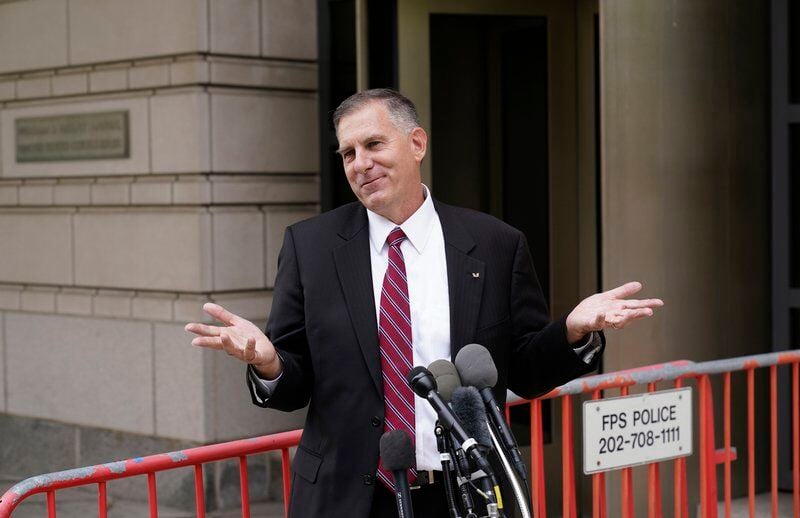 A Florida man who breached the U.S. Senate chamber carrying a Trump campaign flag was sentenced Monday to eight months behind bars, the first punishment handed down for a felony charge in the Jan. 6 Capitol riot and one that could help determine the severity of other sentences in hundreds of pending cases.

In pronouncing the sentence on Paul Allard Hodgkins, U.S. District Judge Randolph Moss said the 38-year-old had played a role, if not as significant as others, in one of the worst episodes in American history. Thousands of rioters loyal to then-President Donald Trump stormed the Capitol and disrupted the certification of Joe Biden's election win, in a stunning display of public violence.

“That was not, by any stretch of the imagination, a protest,” Moss said. “It was … an assault on democracy.” He added: “It left a stain that will remain on us … on the country for years to come.”

Moss acknowledged Hodgkins’ sentence could set a benchmark for future cases. And deciding an appropriate punishment was made more challenging because the case is unique and the court couldn’t look to previous sentencings as a guide.

More than 500 people have been charged so far for their participation in the attack, and many like Hodgkins were accused of serious crimes but were not indicted, as some others were, for roles in larger conspiracies. They will have to decide whether to plead guilty or go to trial.

Moss interrupted Hodgkins' attorney, Patrick Leduc, to ask if granting the defense request to spare Hodgkins from prison could encourage others disgruntled by the results of a future election to besiege the Capitol.

“If we allow people to storm the United States Capitol, what are we doing to preserve our democracy?" Moss asked.

But the judge said Hodgkins deserved a lesser sentence than the 18 months prosecutors had requested, in part because he didn’t assault anyone, didn’t damage government property and wasn’t among the lead attackers.

Hodgkins apologized to the court and said he felt ashamed. Speaking calmly from a prepared text, he described being caught up in the euphoria as he walked down Washington’s most famous avenue, then followed a crowd of hundreds into the Capitol.

“If I had any idea that the protest ... would escalate (the way) it did ... I would never have ventured farther than the sidewalk of Pennsylvania Avenue,” he told the judge. He added: “This was a foolish decision on my part.”

He pleaded guilty last month to obstructing an official proceeding by participating in an attack that forced lawmakers to run and hide in fear. Five people died, including a police officer and rioter shot by police. Two other police officers who faced Jan. 6 rioters died by suicide days later.

In requesting an 18-month prison sentence during the hearing in Washington, Assistant U.S. Attorney Mona Sedky likened the attack to “domestic terrorism.”

Leduc, Hodgkins' lawyer, said the government's description of the Jan. 6 events was hyperbole.

“I think it is gaslighting the country,” he said. What happened, he added, was "a protest that became a riot.”

Moss interrupted Leduc again, noting that some of the Trump supporters seemed to be out to track down lawmakers, including House Speaker Nancy Pelosi.

“There were people who were storming through the halls of the Capitol saying, ‘Where’s Nancy?’” the judge told the attorney. “That is more than a simple riot.”

Sedky said that while Hodgkins didn’t engage in violence himself, he walked among many who did — in what she called “the ransacking of the People’s House.” And as he walked by smashed police barriers, he could see the smoke of tear gas and the chaos ahead of him.

“What does he do?” she asked the court. “He walks toward it. He doesn’t walk away.”

Hodgkins, she added, was in the midst of a mob that forced lawmakers to seek shelter and some congressional staffers to hide in fear, locked in offices, as hundreds swept through the building. Those in fear for their lives that day will, she said, “bear emotional scars for many years — if not forever.”

Under the June plea deal, Hodgkins agreed to plead guilty to the one count and pay $2,000 in restitution to the Treasury Department. In exchange, prosecutors agreed to drop less serious charges, including entering a restricted building and disorderly conduct. They also said they would ask for a reduced sentence for acceptance of responsibility and for saving the government from a costly trial.

In earlier filings, Leduc described his client as an otherwise law-abiding American who, despite living in a poorer part of his hometown of Tampa, regularly volunteered at a food bank. He noted that Hodgkins is an Eagle Scout.

His actions on Jan. 6 “is the story of a man who for just one hour on one day lost his bearings ... who made a fateful decision to follow the crowd,” the attorney said.

But Judge Moss said Monday that he didn't accept that there was no forethought by Hodgkins or that he had no ill intentions. He brought rope and protective goggles with him to Washington, the judge said, and that demonstrated he came "prepared to defend his position and engage in whatever needed to be done.”

Video footage shows Hodgkins wearing a Trump 2020 T-shirt, the flag flung over his shoulder and eye goggles around his neck, inside the Senate. He took a selfie with a self-described shaman in a horned helmet and other rioters on the dais behind him.

Separately on Monday, Enrique Tarrio, the leader of the Proud Boys who was arrested in Washington two days before the insurrection, pleaded guilty to burning a Black Lives Matter banner that was torn down from a historic Black church in December. He also pleaded guilty to attempted possession of a large-capacity ammunition feeding device after police found two high-capacity firearm magazines when he was arrested.

Dennis DeSilvey, 72, of Gearhart Road, Pulaski, passed away at UPMC Presbyterian Hpspital on July 27, 2021. Private services with Smith Funeral Home, New Wilmington. Celebration of his life will be announced at a later time.