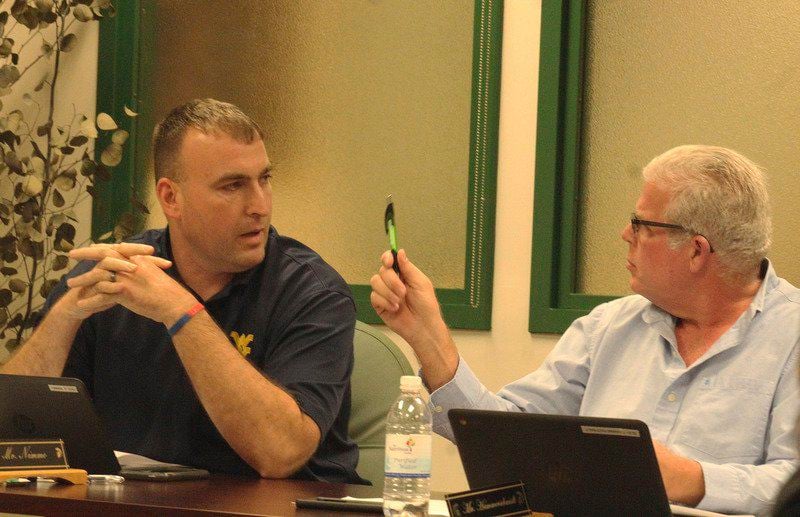 Laurel School Board members Lance Nimmo, left, and Jeff Hammerschmidt have a disagreement during the discussion of Superintendent Leonard Rich’s contract. 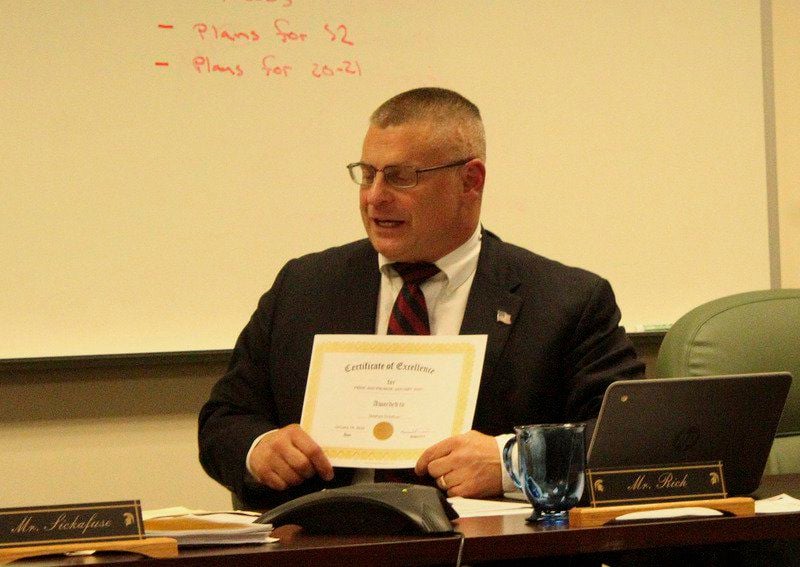 Laurel Superintendent Leonard Rich holds up a certificate during Tuesday night’s board meeting.

Laurel School Board members Lance Nimmo, left, and Jeff Hammerschmidt have a disagreement during the discussion of Superintendent Leonard Rich’s contract.

Laurel Superintendent Leonard Rich holds up a certificate during Tuesday night’s board meeting.

Leonard Rich has a new contract with the Laurel School District.

After 14 months of uncertainty, a pivotal 2019 primary election changing the direction of the school board and an interim agreement forged this past summer, Rich has a new contract that will pay him $123,000 for the 2019-20 school year and will keep him at the helm of the district until June 23, 2023.

The Board of Education passed the measure at its Tuesday meeting. Rich’s temporary agreement was set to expire at the end of the month, in which case the district would have had to put him on a month-to-month agreement.

Rich has been the Laurel superintendent since 2016 and is also the building director of the Lawrence County Career and Technical Center.

“I just think it’s time for all of us to come together and move Laurel forward,” Rich said Wednesday.

His term started immediately after the motion to approve his permanent contract — the final agenda item during the 23-minute meeting — passed, but not without some spirited discussion. The motion, introduced to the board as a whole, was made by Justin Kirkwood, with Kori Enscoe seconding the motion. Board member Jeff Hammerschmidt then asked for a roll-call vote.

Lance Nimmo, the sixth board member called, voted to abstain. Immediately following, Hammerschmidt — sitting immediately to Nimmo’s left — asked, “How can you do that, sir?”

“How can you decide that you’re declining the president of the board because it’s already been decided,” Nimmo responded. “I guess I could say that’s my prerogative this week as well.”

Nimmo nominated Hammerschmidt for board president at the December reorganizational meeting, but Hammerschmidt declined the nomination saying the presidency had already been decided. President Stephen Sickafuse, who was nominated by Hammerschmidt, was voted to lead the board by a 7-2 vote. Nimmo and Sickafuse voted against the motion.

Nimmo was one of the five board members who voted 5-4 against extending Rich’s contract in November 2018 and again in January 2019. Nimmo won re-election to a four-year term in 2017, while the four other board members — James Eppinger, Alan Carlson, Timothy Redfoot and Earl Williams — lost a battle in the May primary to a block of four pro-Rich candidates, but not before the original board voted to give Rich an interim deal in June. Nimmo and Williams did not attend or vote at that June meeting.

“You’ve voted several times to not renew his contract, have you not?” Hammerschmidt asked Nimmo.

“Is it my prerogative or has it already been decided?” Nimmo responded.

Hammerschmidt then asked Nimmo, “What the hell is wrong with you?” in regard to his vote.

Earlier in the meeting, Rich recognized all board members for their service as January is School Board Recognition Month and awarded them the month’s Pride and Promise award. Principal Mark Frengel congratulated the varsity cheerleading team for their seventh-place finish at the state competition in Hershey.

In other business, the board unanimously:

Approved Annmarie Santini and 12 Future Business Leaders of America members’ participation in a competition to be held in April in Hershey at a total district cost of $8,705. The FBLA has already raised $500, and each qualifier will pay $100.Hired Scott Sauders as assistant boys track and field coach at a salary of $2,350.Approved the audit report for the fiscal year ending June 30, 2019. Laurel was able to deposit approximately $300,000 in the general fund, which now stands at about $8.9 million. Accepted the resignation of Jenna Hill as an aide, effective Dec. 11. Hired Nicole Scott as the musical choral director at a salary of $1,150. Approved the transfer of 67 sick days for director of administrative services Robert Lee. Lee came from the Central Valley School District. Agreed to allow Stephanie Rambo and Deana Buckner to attend the Data, Measurement and Geometry seminar to be held at the Beaver Valley Intermediate Unit on Feb. 12 at a total cost of $362.