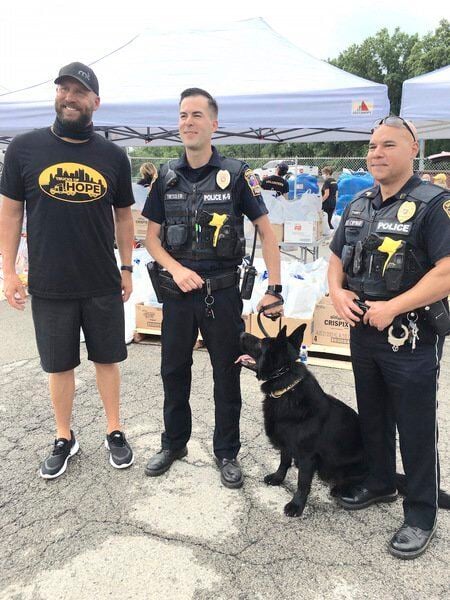 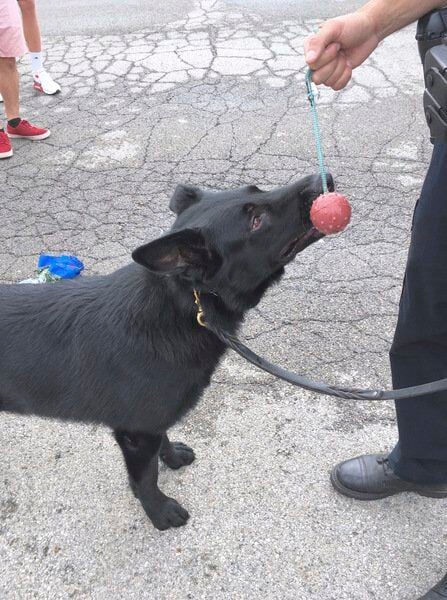 Shenango Township's police dog, Kalo, plays ball with his handler, Dan Tressler, while visiting with Steelers quarterback Ben Roethlisberger on Wednesday. Roethlisberger's foundation paid for the canine and his training.

Shenango Township's police dog, Kalo, plays ball with his handler, Dan Tressler, while visiting with Steelers quarterback Ben Roethlisberger on Wednesday. Roethlisberger's foundation paid for the canine and his training.

If it weren't for Pittsburgh Steelers quarterback Ben Roethlisberger, the Shenango Township Police Department wouldn't have a police canine.

Roethlisberger had a chance to meet Kalo, a 5-year-old, all-black German shepherd, face to face Wednesday during a massive food distribution at the Shenango Elementary School parking lot. The star player was there with his wife, Ashley, a Laurel High School graduate, to assist with the Trucks of Hope/Convoy of Hope/NOW venture to give away boxes and bags of food and other supplies to more than 1,500 people in a drive-through distribution.

Kalo, whose handler is Shenango Township patrolman Dan Tressler, was on site to meet Roethlisberger while the distribution was under way.

The police department acquired Kalo from the Shallow Creek Kennels in South Pymatuning Township, Mercer County. He was paid for with funds from the Ben Roethlisberger Foundation, founded by Roethlisberger, which disperses grants to police and fire department canine units throughout the United States.

Kalo was born in Hungary, and answers to a variety of commands in English, German and Czechoslovakian, Tressler said. He is trained for patrol and for narcotics detective.

"This was the first time they ever met," Tressler said.

"It was great that he helped us out," Tressler said of Roethlisberger, "because I don't know if we could have afforded it otherwise."

Kalo is the only canine officer on the Shenango police force.

Another county resident dies of COVID-19, the fourth death in a week

Joseph Lubensky Jr., 81, of 26 N. Jefferson St., New Castle passed away Aug. 2, 2020, at his residence. Following his wishes, no services are scheduled at this time. Arrangements entrusted to Noga Funeral Home.