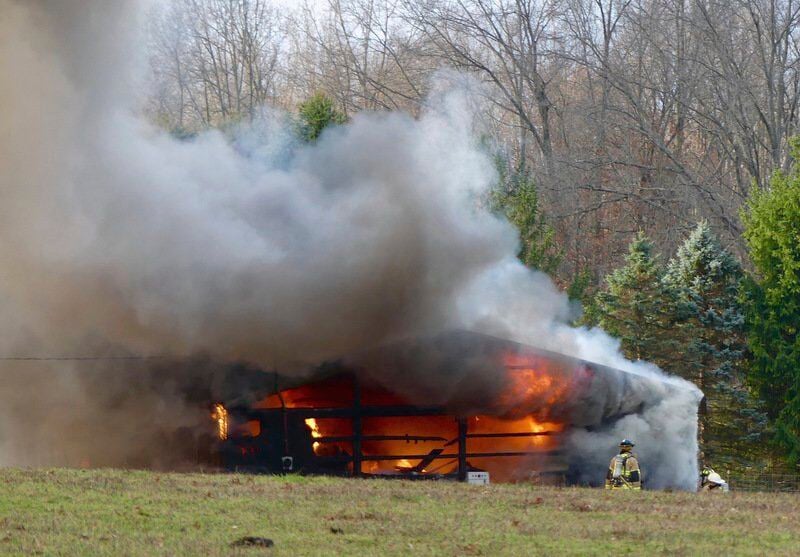 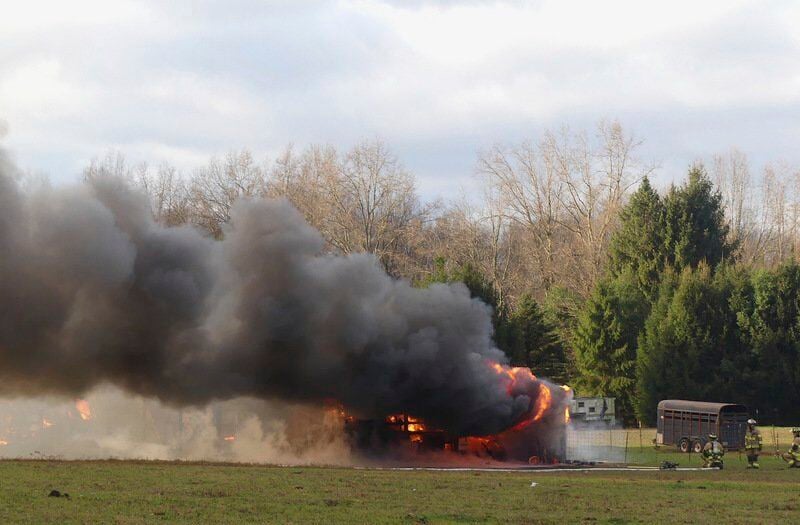 Smoke billows from a garage/barn on Game Farm Road in Scott Township that went up in flames early Monday.

Smoke billows from a garage/barn on Game Farm Road in Scott Township that went up in flames early Monday.

A blaze that destroyed a Scott Township barn Monday morning also claimed two rabbits, about 30 chickens, a quantity of 4-H and farm equipment and multiple bales of straw and hay.

The fire, which drew a dozen fire departments from three counties, broke out around 7:30 a.m. at the family-run farm of Roy and Katherine McKelvey at 222 Game Farm Road.

Joanna McKelvey, their daughter-in-law, said the family's six horses got loose when the fire started. She expressed her gratitude to the neighbors, who helped to round up the mixed-breed quarter horses.

Some of them were running down Harlansburg Road and people were on mopeds trying to round them up, according to reports from bystanders.

"They suffered bumps and bruises, but they will be OK," McKelvey said, adding that four sheep and a ram were also saved.

McKelvey, who is the vocational agriculture teacher at Wilmington High School, said she believes it was a neighbor who called 911.

"We don't really know what happened," she said. The 120-by-30-foot barn, which was partly a garage, was a total loss.

"We lost all of our hay and straw," McKelvey said, "and all my kids' 4-H equipment for their projects."

"The fire departments were absolutely amazing," she said. The tanker trucks had to transport water to the scene, and the trucks were lined up on the road and were drawing water from a reservoir they had set up there, she said.

Scott Township Fire Chief Jack Hitchen said about 10 to 12 local volunteer fire departments responded, most of them to transport tankers full of water to the scene. His department transported the water from its firehall on Harlansburg Road, and that the Slippery Rock Township Volunteer Fire Department from Butler County pumped water from a lake.

"We tanked everything," Hitchen said.

Noga Ambulance was on standby, Hitchen said. He said that fire departments were at the scene for more than five hours.

McKelvey said she left school to go home after she learned about the fire. The Wilmington Area School District students are not in session because of COVID-19, but the teachers still report to the classrooms, she explained.

While some vo-ag lessons are hands-on, there is some instruction she can give her students online. Outdoor projects and FFA are all shut down right now, she said.

"It's difficult for all of us," she said.

McKelvey and her husband, Jason "Jack" McKelvey, share the farm with his parents, she said.