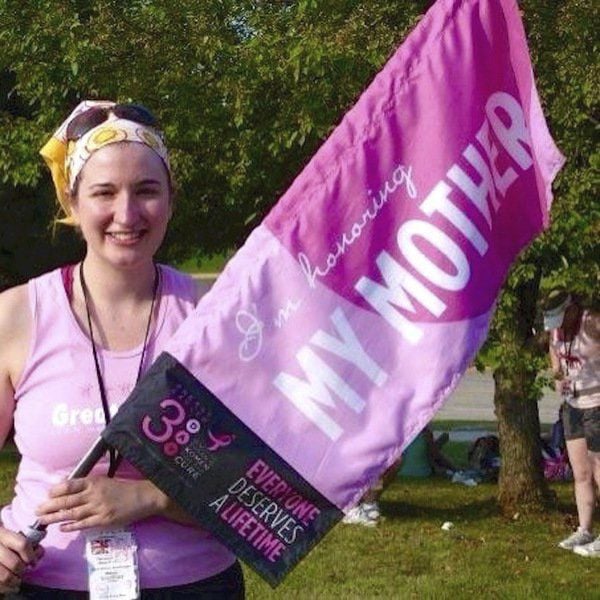 Margo Dominicis, formerly of Neshannock Township, walks in the Komen 3-Day event in Cleveland in 2011 in honor of her mother, who died of breast cancer 17 years ago. Dominicis was diagnosed with it last year. 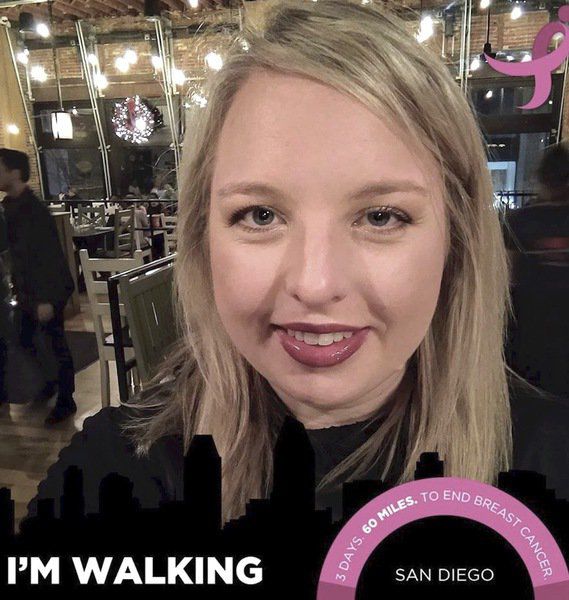 Former Neshannock resident Andrea Durst, a supporter of her friend, Margo Dominicis in her fight against breast cancer, plans to walk with her and other teammates in the Komen 3-Day, 60 mile walk in San Diego next month. 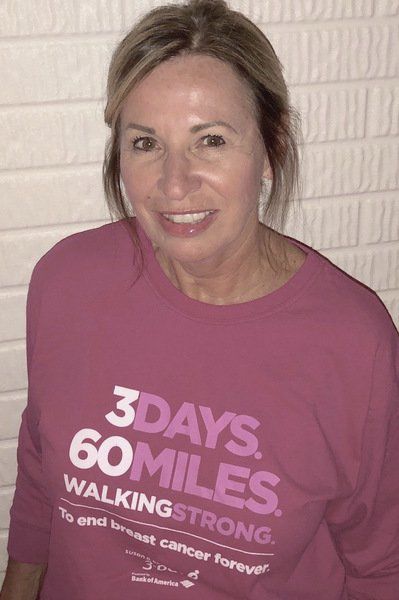 Karyn Mueller will be walking next month in her 9th Komen 3-Day, 60-mile walk to end breast cancer.

Margo Dominicis, formerly of Neshannock Township, walks in the Komen 3-Day event in Cleveland in 2011 in honor of her mother, who died of breast cancer 17 years ago. Dominicis was diagnosed with it last year.

Former Neshannock resident Andrea Durst, a supporter of her friend, Margo Dominicis in her fight against breast cancer, plans to walk with her and other teammates in the Komen 3-Day, 60 mile walk in San Diego next month.

Karyn Mueller will be walking next month in her 9th Komen 3-Day, 60-mile walk to end breast cancer.

A proponent of fundraising to end breast cancer has raised $30,000 herself by walking 480 miles in past Susan G. Komen 3-Day events.

Karyn Mueller, 63, of Cleveland, who spent most of her growing-up years in New Castle, has gathered donations and trekked her way through eight of the 60-mile walking events in some of America's larger cities. This year's walk will be her ninth.

She plans to participate in the annual walk this year, held Nov. 15-18 in San Diego, with Margo Dominicis and Margo's husband, Bob Terek, both of Pittsburgh, Andrea Durst of Pittsburgh and Holly Hockenberry of Cleveland. Dominicis and Durst both are Neshannock High School graduates and lifelong friends. They all will comprise a walking team called #Margostrong.

Dominicis' mother died of breast cancer 17 years ago. Margo, herself, was diagnosed with it in July 2018, at age 36. Following chemotherapy and a double mastectomy and reconstruction this year, Margo declares she is now ready to walk with the team.

Her sister, Allison Zeigler, 34, of New Castle, also signed up to walk with the team but found out a few months ago that she is pregnant. She will be cheering them on at the fundraiser.

In order to participate in the walk, the teammates each must raise with $2,300 as their contribution to Susan G. Komen, and those funds can be from sponsors or fundraisers.

Mueller, Dominicis and Durst sat over lunch one day and hatched the idea of sponsoring a local dance and musical fundraiser at Cascade Park as a way to raise their contributions.

Thus, "Bust Out Breast Cancer" is set to take place Oct. 13 in the park's ballroom. The idea has ballooned to include eight musical acts.

The event opens at noon and lasts until 9:30 p.m. and is expected to draw a crowd from a multi-county and multi-state area.

The team #Margostrong has been promoting the dance through a multi-county poster blitz and on Facebook and other media.

Tickets are $10 per adult and $5 per child and are available online at Eventbrite, or they may be purchased at the door. All proceeds go to the Komen cause.

Food vendors will be on the grounds, and because it is family oriented, a princess from Frozen and a caricature artist are expected to make appearances. A basket raffle featuring about 70 baskets, and a silent auction of sporting good items also are part of the fundraising effort.

Mueller said she first got involved in the Susan G. Komen movement in 2009 to support a friend whose mother had breast cancer.

Mueller had gone to school with Margo's father, Ron Dominicis. Ron introduced Mueller to Margo, who was diagnosed last March.

Margo and Durst first walked with Mueller and other friends in the 2011 3-Day in Cleveland, in memory of Margo's mother, and they all became closer friends. That led them to enroll this year as well.

Since 3-Day is held in larger cities in the United States, the three women chose the San Diego walk, which Mueller has walked before.

"Margo said she wants to walk this year in a survivor's circle," Mueller said. She described how the walk ends each year with a closing ceremony, when all of the cancer survivors join with walkers gather in a circle and join hands.

She told Margo to choose a city for the walk this year and they would go. The other cities hosting the 3-Day this year are Atlanta, Minneapolis/St. Paul, Seattle, Dallas, Philadelphia and Boston.

In addition to having walked the Cleveland and San Diego 3-Day events, Mueller also has walked in the 3-Days in Atlanta, Dallas and Seattle.

"We do 22 or 23 miles the first day, 22 miles the second day and about 17 the third day of the walk," she said, noting the third day concludes with the closing ceremony.

The San Diego event usually attracts about 5,000 walkers, and about 43 miles of it is along the Pacific Ocean, she said, adding, "It's a beautiful walk."

The three teammates plan to meet in New Castle to leave together for the West Coast event.

Durst, 38, has been a friend of Margo since fourth grade.

"We've stayed in touch over the years and we've done the walk together twice before," she said. She and Margo met Karyn through Margo at a previous walk in Cleveland and they became friends. They teamed up for this year's walk when Margo said she wanted to participate.

"When Margo was diagnosed this year and said she wanted to do it, I immediately signed up and knew I wanted to walk with her and be with her on her journey," Durst said. "We've been working hard on the fundraiser. We're really excited about the lineup of the bands and are hoping to see a lot of people turn out for that."

She said that the whole team is involved in the effort, adding that she is grateful for all of the support of the community, musicians and other people who have given contributions and volunteered.

Mueller, who attended New Castle Area schools through 11th grade, has lived in Cleveland since her senior year. Although neither she nor her family have been touched by breast cancer, she had friends who lost their battles with it.

Mueller walks in the event for the personal satisfaction of helping others in need.

"When you walk, you feel like you're really doing something important," Mueller said. "It's a good thing to do and I get fulfillment in knowing that I'm helping somebody.

"I've met so many wonderful people, and a lot of them have become good, good friends now."

She regards the upcoming Bust Out Breast Cancer fundraiser as "a nice event for New Castle. It will bring people together and it will raise money for a cause."

Susan G. Komen, formerly known as Susan G. Komen for the Cure and originally as The Susan G. Komen Breast Cancer Foundation, is the largest organization in the United States with a mission to end breast cancer, according to its website, ww5.komen.org.

A Susan G. Komen website for the 3-Day event bears the motto, "3 Days. 60 Miles. Not as hard as breast cancer."