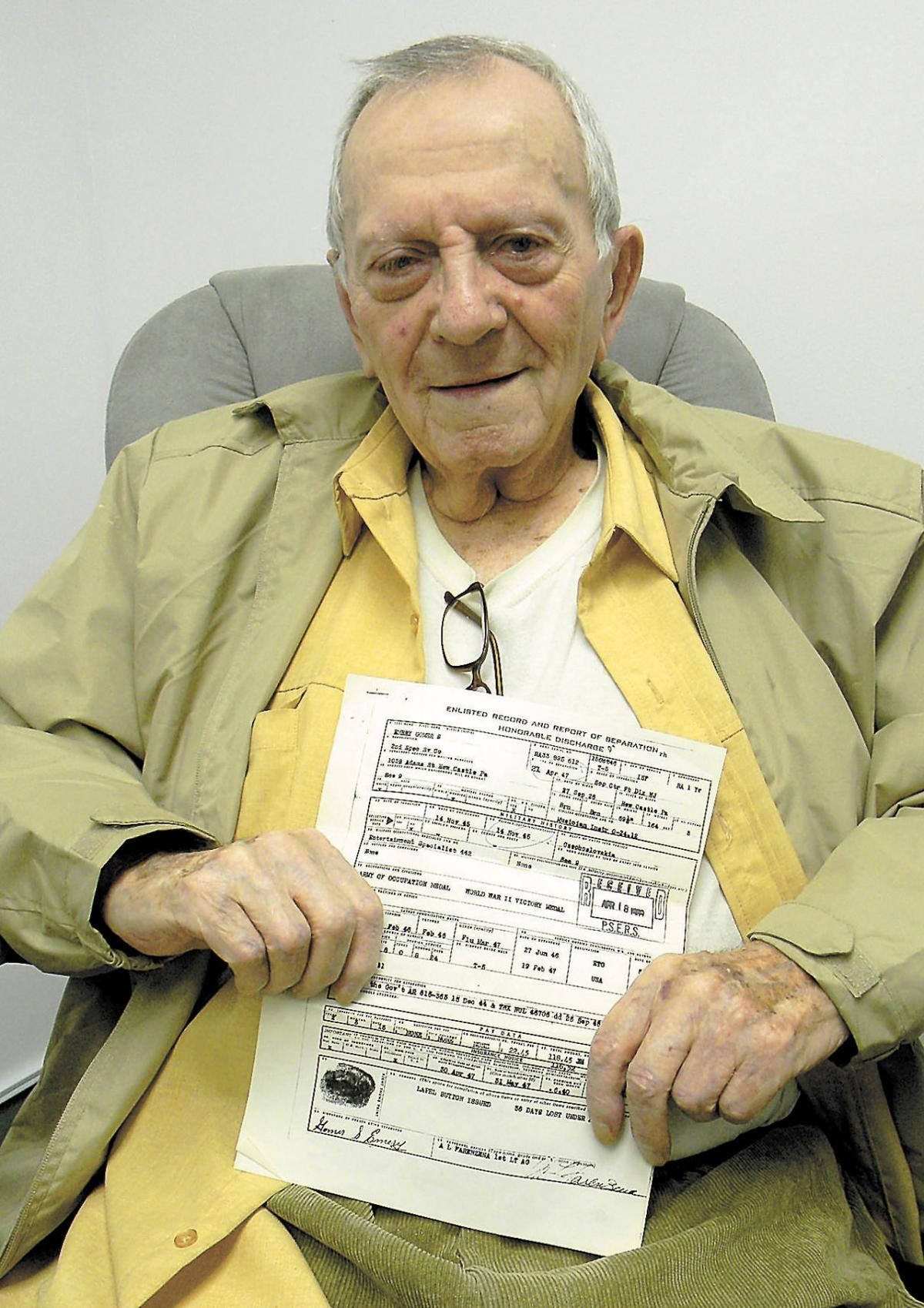 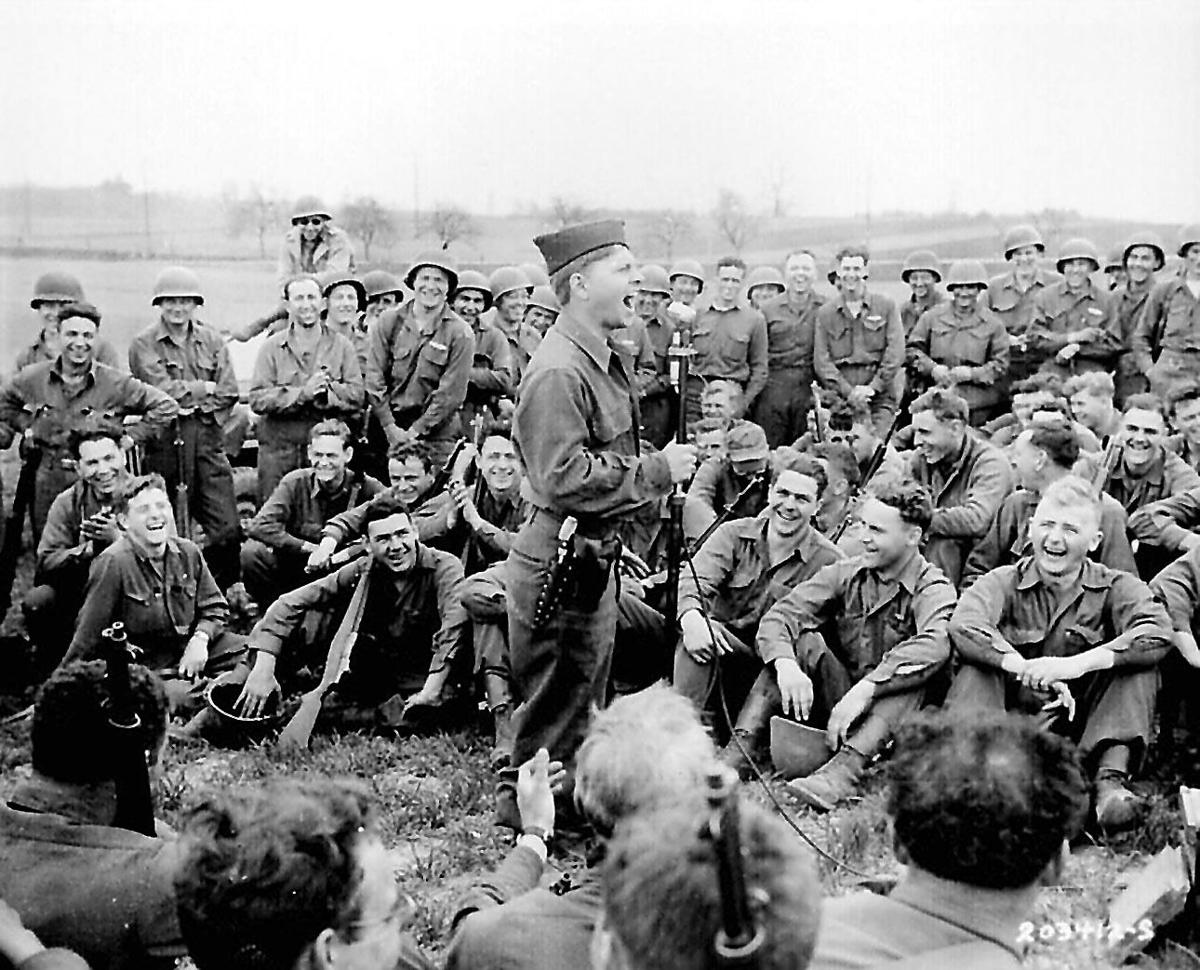 Actor Mickey Rooney, center, earned a Bronze Star for entertaining the troops during World War II. Rooney and Gomer Emery of New Castle were in the same outfit, and sometimes would play ping pong together.

Actor Mickey Rooney, center, earned a Bronze Star for entertaining the troops during World War II. Rooney and Gomer Emery of New Castle were in the same outfit, and sometimes would play ping pong together.

Gomer Emery did a lot of fighting during World War II.

Emery, an 88-year-old South Side resident, was drafted in November 1944, shipped out to France in April 1945 and arrived in Czechoslovakia just in time to join the 94th Division of Gen. Patton’s Third Army for the May 6 liberation of Pilsen.

“They started firing some artillery into Pilsen, and white flags come up all over the place, and the war was over for me,” Emery recalled. “The Germans surrendered. And that was the only thing I ever saw as far as action goes.

“We went in and we took Pilsen, and they were all there with their hands up. The war in Europe ended officially a couple of days later.”

However, elements of the Third Army would remain in Pilsner to help the Czechs rebuild until November. That included Emery who, having trained as a boxer in New Castle, suddenly found himself reassigned to “special services” and the squared circle. Working his way up from battalion to regimental and finally, the divisional boxing team, Emery toured parts of Czechoslovakia, Austria and Germany, but never surpassing a total of eight bouts – at least, that’s what he told the people arranging the fights.

“I was a novice fighter,” the former middleweight said. “They had in the Army what they called ‘novice’ or ‘open.’ If you have 10 fights, you have to fight open. But if you fight open, you’re liable to be fighting Max Baer or somebody. You don’t know who they are. There were a lot of ringers, guys who wanted to box that were professionals that would lie about it and never say that they had boxed before. If you ran into one of them, you were in trouble. You’d really get a beating. I saw it happen.

“So I always made sure I had eight fights. One time a guy asked me, ‘Were you sick for a couple of months?’ I said, ‘No, why?’ ‘Well, you had eight fights two months ago.’ I always told them eight, maybe nine — I never went over 10.”

Emery can’t recall what his actual record might have been. All he knows is that he lost his last fight.

“That’s why it was my last fight,” he said. “I was out of shape, and this guy almost killed me.”

Emery doesn’t recall his opponent’s name, only that he had won all his previous bouts by knockout, and never had been knocked down. So no one was more surprised than Emery when, in the first of a scheduled three-round contest, the combination of an Emery punch and a set of loose ropes sent his opponent tumbling out of the ring.

When that happened, Emery explained, the referee was supposed to start a 20 count, and if the fighter hadn’t returned to the ring in that time, then Emery would be proclaimed the winner. Instead, the referee moved to disqualify Emery, claiming he had pushed his opponent over the ropes.

A debate ensued, and the referee finally acquiesced, but not before two or three minutes had passed, Emery said, and his opponent – who’d hit his head on a chair – had managed to return. In round two – despite a 20-minute interruption by a power outage – the unbeaten pugilist exacted his revenge, pummeling Emery to the point that his right eye was almost completely swollen shut, and his left was partially closed.

Fighting with the divisional boxing team enabled Emery to cross paths with other athletes on tour, such as fellow draftee and former world light heavyweight champ Billy Conn of Pittsburgh and golfing legend Byron Nelson, who had a blood disorder that had kept him out of the service.

But rubbing elbows with celebrities didn’t end when Emery switched special services specialties in the fall of 1945. A trumpet player as well as a boxer, he was assigned to the 20th Corps Touring Band. It was a move that placed him in the same company as Mickey Rooney.

Rooney also had been drafted in 1944 and wound up earning a Bronze Star for his nearly two years of entertaining the troops in America and Europe, as well as his work as a radio personality on the Armed Forces Network.

Although Emery and Rooney were in shows that toured independently of each other, Emery still spent some quality time with the diminutive actor who had risen to fame in a series of Hardy Boys movies in the 1930s and ’40s.

“I was never in any of his shows, but I used to play ping pong with him,” Emery said. “He was a helluva ping pong player. I couldn’t beat him; he was tough. And I’d run into him sometimes when we were both touring and we ended up at the same hotel. They had ping pong tables and pool tables – he was a good pool player, too.”

Emery recalled that despite Rooney’s talent, he created one challenge for the Army.

“He was only 5-foot-1. They had to make special uniforms for him,” Emery recalled. “The Army didn’t have uniforms to fit him, so all of his uniforms had to be tailor made.”

Emery received his discharge in November 1945, but the Army offered a 60-day furlough and a $300 bonus (nearly $4,000 by 2014 standards) if he would re-enlist and agree to be sent back overseas. Although Emery didn’t know where he’d end up, he took the deal, returned home to spend Christmas with his family and married the woman he’d been seeing for two years.

When his two months were up, he was sent to Bamberg, Germany, still classified as an “entertainment specialist.” Since the Army had no bands in that area, he was put in charge of music and entertainment at the Army service clubs in the area.

Bamberg, Emery recalled, had been untouched by the war, and his job there was to interview and grade entertainers to determine what they would get paid.

Discharged for good in April 1947, Emery returned home to work in various trades: a steel mill, foundry and eight years at United Engineering in New Castle. On the side, he found extra money by installing TV antennae, painting high-tension towers and even shooting fireworks.

Still, there was one last battle for the Army vet to fight.

When the entertainment bug proved hard to shake, he wound up joining some local bands and continued performing. This time, though, it was against orders.

“I married my wife on furlough, but what I didn’t realize at the time was that she didn’t like musicians,” Emery said. “We had dated for two years, but even though I was playing around New Castle then, we had never talked about it.

“So she didn’t like it when I played nightclubs. But I played anyway.”