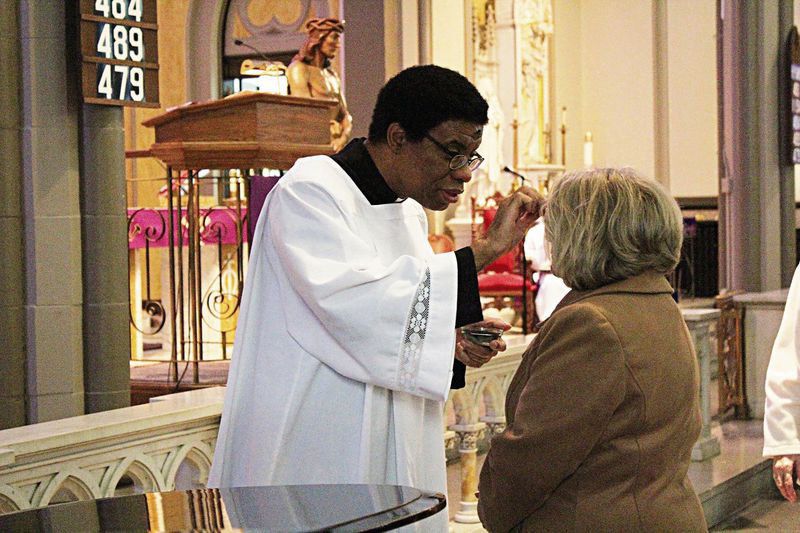 Matthew Hawkins, then a seminarian, places ashes on the forehead of a woman during a 2018 Ash Wednesday Mass at St. Mary Church. 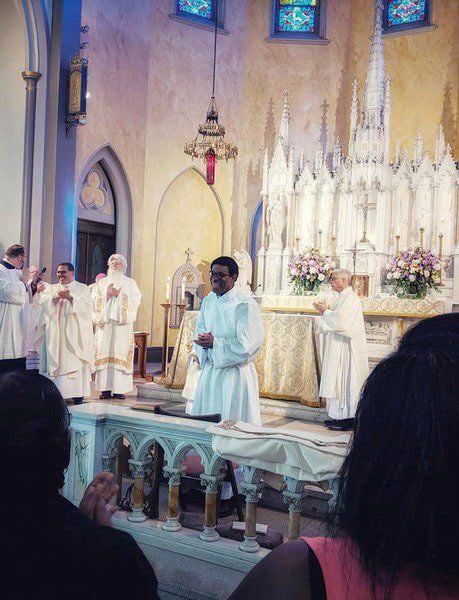 Matthew Hawkins greets parishioners and well-wishers during his 2019 ordination as a deacon at St. Mary Church.

Matthew Hawkins, then a seminarian, places ashes on the forehead of a woman during a 2018 Ash Wednesday Mass at St. Mary Church.

Matthew Hawkins greets parishioners and well-wishers during his 2019 ordination as a deacon at St. Mary Church.

New Castle passed the test. Matthew Hawkins is a priest.

Hawkins, who was ordained as a deacon last year at St. Mary Church and who spent his pastoral year as a seminarian here in 2017, completed his journey to priesthood Saturday with his ordination at St. Paul Cathedral in Pittsburgh.

Interspersed with completing his final year of seminary studies in Baltimore, Hawkins, 63, gained his diaconate experience in Lawrence County’s Holy Spirit Parish. It was a time he credits as being integral to his becoming a priest.

“I think it’s important for parishioners to know that they play an important part in the foundation of priests,” Hawkins said. “A lot of time we think that it’s the rectors at seminary or other priests who are officially assigned to the task of forming new priests. The parishioners will give you feedback.

Listening, said Father Joseph McCaffrey, is an area in which Hawkins has excelled.

“What impressed me the most about him is that he is a real listener,” the pastor of Holy Spirit Parish said. “He listens really well to people, and he has a concern for everyone. When he’s listening to someone, they have his full attention.

“He’s very good at finding out what people’s needs are and being attentive to them.”

Still, ears aren’t the only thing Hawkins exercised during his time in New Castle. He found that his knife and fork got a workout as well.

“The people in Lawrence County have been very warm, very welcoming in a way that you could get to know people on a personal level, as individuals and not just as sort of a faceless mass within the parish,” he said. “First of all, they would make sure you were well fed. Anything that’s going to get done is going to get done over food. There’s something sacramental about that.

“In the Catholic Church, the high point of our religious experience is the Eucharist, the sacramental meal. In many ways, the dinners, the lunches, the coffee shop breaks I had with parishioners felt very sacramental in that sense. It was more than just having a meal or a break to get through the day. It was also an act of communion with the people I was with.”

Hawkins witnessed a number of changes during his time in New Castle. He began his pastoral year under the auspices of Father Frank Almade, who was pastor of four separate city parishes: St. Vitus, St. Joseph the Worker, St. Vincent de Paul and Mary, Mother of Hope.

By the time Hawkins became a deacon, those four parishes and three others -- St. Camillus, St. James the Apostle -- had been rechristened as a single parish, with McCaffrey as its pastor.

“It definitely was definitely a historic and transformative period,” Hawkins said, “and not just for the merger, but for the sheer size.”

Hawkins noted that his fellow seminarians came from all over the country, and when they discussed the experiences of their pastoral years, “someone would say, ‘I spent it in a parish that has around 500 people, and we were really busy because keeping that one church building going was really a task.’ And when it came around to me, I would say that I was in a group of parishes that consisted of seven churches, so it was unusual in that sense.”

Still, he added, the unusual is fast becoming the norm.

“At least for the Midwest and the Northeast and the Mid-Atlantic states, that’s the future because we have a declining population (of both parishioners and priests) and a lot of buildings spread out,” he said. “What we’re looking at is what the future is going to look like, at least for a while.

“So I thought it was really valuable to see how people who have belonged for most of their lives to distinctively different worship sites, culturally different, all coming together as one church.”