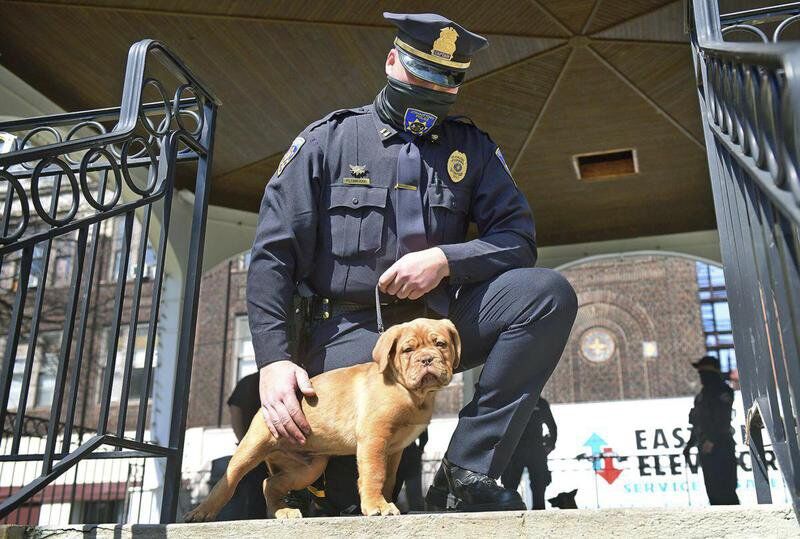 Johnstown Police Department Capt. Michael Plunkard shows off Archie, a Dogue de Bordeaux or French Mastiff, who be trained as a therapy dog to assist the officers and community. 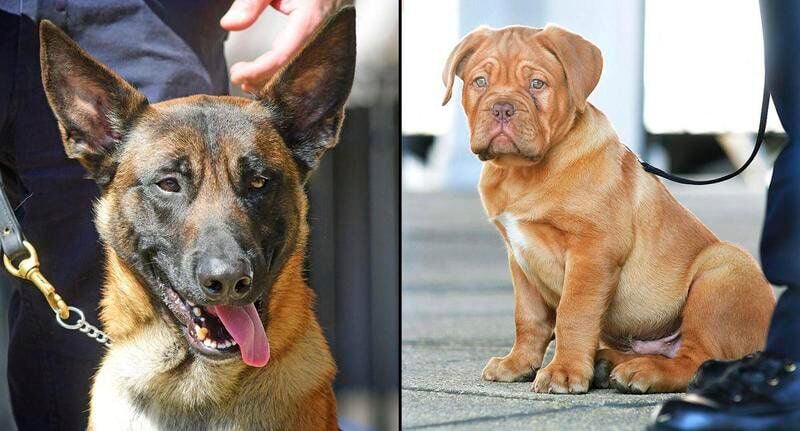 Ripp, a Belgian Malinois, will be trained in narcotics and apprehension.

Johnstown Police Department Capt. Michael Plunkard shows off Archie, a Dogue de Bordeaux or French Mastiff, who be trained as a therapy dog to assist the officers and community.

Ripp, a Belgian Malinois, will be trained in narcotics and apprehension.

The Johnstown Police Department introduced the two newest additions to its K-9 unit on Tuesday, unveiling Archie and Ripp during an announcement event at Central Park in the city’s downtown.

The two young canines were purchased thanks to an outpouring of comfort after the department lost a veteran K-9 officer in November.

“With the overwhelming support that we received after the loss of K-9 Titan, we thought: ‘What better way to honor his duty and sacrifice than to help support the community that has always been there to support us?’ “ Johnstown Police Department interim Chief Chad Miller said.

Titan died in the line of duty while assisting in a search for suspects during an attempted burglary. While in pursuit, Titan fell down an unsecured elevator shaft from the fourth floor of a warehouse on Maple Avenue in the city’s Woodvale section. The groundswell of support came from all corners of the map.

“We cannot give enough thanks to the community members of the area, as well as around the commonwealth, the country and the world as they gave their support during this trying time,” Miller said.

The additions of Ripp and Archie to the department’s K-9 unit were supported by donations to the unit, which Miller said is dependent upon fundraising and donations.

Miller added that the unit received more than 300 donations in support of the K-9 unit in memory of Titan.

Archie is a 9-week-old Dogue de Bordeaux – or French mastiff – and he’ll become the department’s first comfort dog. Archie, who has been going to work for the past two weeks since arriving in Johnstown from Texas, will partner and live with Capt. Michael Plunkard.

“Very friendly dogs. Very approachable if they’re socialized right at a young age. I’ve had Archie for just over a week and a half, and he’s met more people than I can count.

“Their type of breed is just a low-key dog. They look kind of intimidating once they grow up, but they’re just big, lovable dogs.”

Archie will be trained as an approachable therapy dog for officers and the community.

The concept of a police comfort dog is still gaining traction across the country, with Plunkard saying that there are about 200 programs.

“They can also have the added effect of potentially increasing recall during debriefings. Therapy dogs also have the ability to help those with long-term post-traumatic stress manage their symptoms.”

Archie’s easygoing nature was evident following Miller’s words as the puppy sought a shady area in the park’s gazebo to catch a quick snooze before greeting those in attendance. During down moments, Archie chose to lay down in the grass, loudly announcing his desire for a bit more leash from Plunkard to get to a perfect spot.

Ripp, a 17-month-old Belgian Malinois, will work and live with Patrolman Brian Stevens, whom Titan worked and lived with.

Stevens noted that Ripp is still going through training and would need EPCA certification before he can work in the field as an officer. Ripp is currently being trained to assist the department in narcotics detection and apprehension.

Ripp, the more energetic of the two dogs at the park, tugged and pulled in a playful manner while almost yanking Stevens off balance.