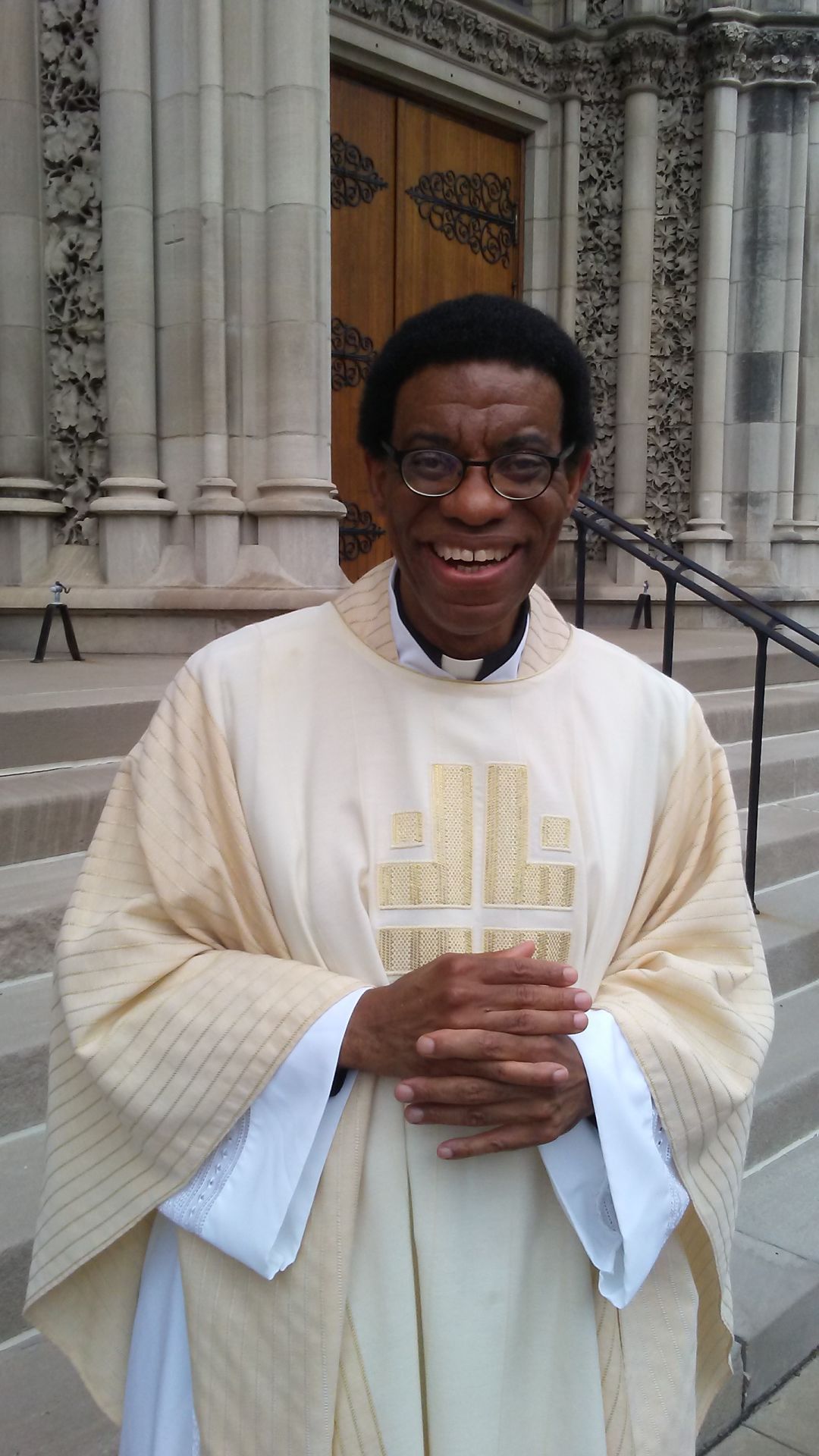 Father Matthew Hawkins is all smiles outside of St. Paul Cathedral in Pittsburgh after his ordination as a priest on Saturday. 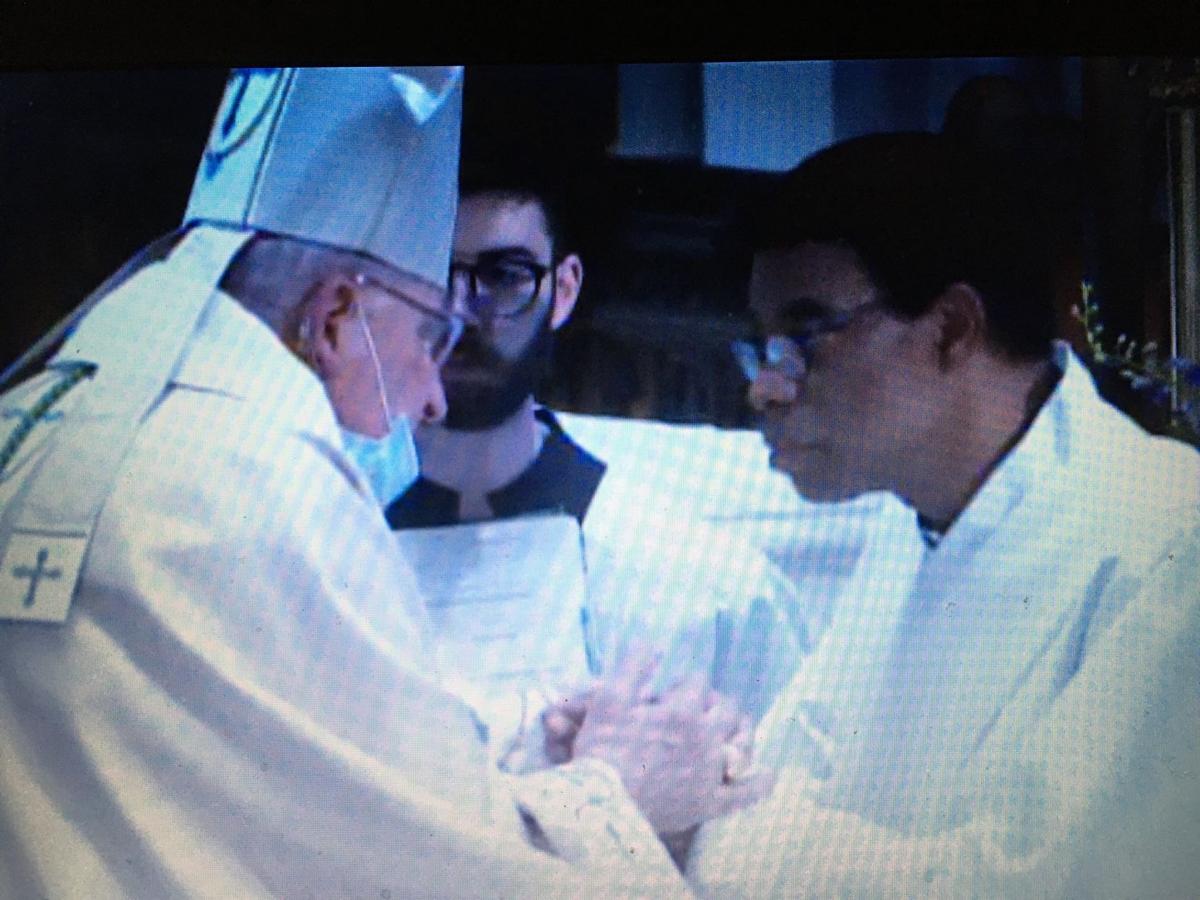 In this screen shot taken from a live-streamed Mass of Ordination, Bishop David A. Zubik speaks with priesthood candidate C. Matthew Hawkins.

Father Matthew Hawkins is all smiles outside of St. Paul Cathedral in Pittsburgh after his ordination as a priest on Saturday.

In this screen shot taken from a live-streamed Mass of Ordination, Bishop David A. Zubik speaks with priesthood candidate C. Matthew Hawkins.

The 63-year-old Pittsburgh native spent his pastoral year as a seminarian in New Castle, and was ordained a deacon in 2019 at St. Mary Church, after which he continued to serve Holy Spirit Parish.

He was ordained Saturday morning in a Mass at St. Paul Cathedral in Pittsburgh’s Oakland section, along with Jeffrey M. Craig of Wexford and Michael J. Faix of McKeesport.

Hawkins is scheduled to celebrate his first Mass at 4 p.m. Sunday at St. Paul Cathedral. After that, he will become a parochial vicar in the newly formed personal parish for the Black Catholic community in the Diocese of Pittsburgh under the title of Saint Benedict the Moor Parish (Hill District), effective July 13.

“It is important to note that today I ordained three new priests, among them, Father Matthew Hawkins," Zubik said. "It is always special for me to give a new priest his first assignment.

"It is also special for a parish to receive a newly ordained priest. It is my hope that Saint Benedict the Moor parish rejoices in receiving one of our newest priests."

In addressing Hawkins, he offered some light-hearted comments as well as a precious memory. Zubik said that he knows that Hawkins likes food of all kinds, and that his youthful-looking visage would make him a challenging guest on a game show where contestants would have to guess his age.

Zubik also recalled four Christmases that the two men’s families spent together, saying that he “ will always hold that as a very sacred note of our brotherhood.”

The bishop said that each candidate for priesthood had marked himself as a man of prayer, and spoke of how he’d seen that reflected in each man’s life.

“Matt,” he said to Hawkins, “you are quickly getting the reputation for being an outstanding preacher. But anybody that listens to what you have to say about the Word of God knows that you’re not talking about yourself.

“You’re talking about the Lord Jesus, and the kind of message that you deliver cannot come from you. It can only come from the Lord.”

He challenged all three men to “Never, ever, outgrow your capacity to pray. Continue to grow into it.”

Attendance at the Mass was by invitation only, because of COVID-19 restrictions. In a news release prior to his ordination, Hawkins drew a parallel between that situation and the challenges of the priesthood.

“The pandemic, of course, has caught all of us by surprise and many people have expressed their concerns about how it will affect my ordination,” he said, “but I cannot help but think about those who have lost their lives or lost loved ones, or have lost their jobs in the aftermath of the first wave of this crisis.

“The pandemic, the economic crisis and the subsequent social unrest indicate to me that the very nature of the priesthood is to enter into solidarity with those who suffer, and that is really all of us, and to minister to humanity during unpredictable times. All times are unpredictable.”

County up 14 COVID cases since Friday

Confirmed coronavirus cases are rising in 40 of 50 states

Randall Verzilli, 55, of New Castle passed away the afternoon of July 3, 2020. Funeral services will be held privately. Arrangements are being handled by the R. Cunningham Funeral Home and Crematory Inc.