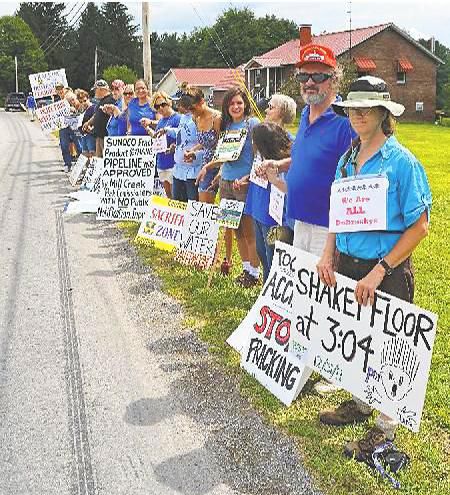 This protest against fracking in front of the home of Ivan Dubrasky on Old Pulaski Road was one of several that took place during a period when numerous wells were approved over the last few years. 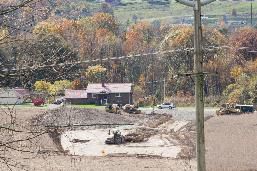 This photo is of early work at the Chrastina oil and gas wellpad on Old Pulaski Road across from the home of Ivan Dubrasky who is a party to a challenge to the township's zoning ordinance over where fracking is allowed.

This protest against fracking in front of the home of Ivan Dubrasky on Old Pulaski Road was one of several that took place during a period when numerous wells were approved over the last few years.

This photo is of early work at the Chrastina oil and gas wellpad on Old Pulaski Road across from the home of Ivan Dubrasky who is a party to a challenge to the township's zoning ordinance over where fracking is allowed.

Calling the Sept. 28 decision "a ray of hope for the Constitution," attorney Chris Papa said, "You can't just favor one industry; people have Constitutional rights."  Papa and his father, attorney Angelo Papa, represent plaintiffs in several local court challenges to the oil and gas industry.

The decision declared unconstitutional some sections of Act 13, the state's oil and gas drilling law.

The decision, he said, takes the pressure off of local municipalities. "The opinion undercuts the argument that they have to bend over backward for what is proposed by the oil and gas industry."

Papa termed it "a very significant decision" and said it was "the cleanup decision of the original Robinson Township decision in 2013." Although that decision struck down some zoning rules favoring the oil and gas industry, Papa said it left some unresolved issues such as a medical gag rule and Public Utility Commission oversight over local oil and gas ordinances. Papa said the decision will make municipal officers feel much safer in passing laws that restrict the fracking industry. He said municipalities are now free to say drilling is not permitted in agricultural and residential areas. The court also affirmed that local governments have the right and duty to preserve environmental rights, he noted.

This is "a big, big pushback from where the Commonwealth Court was going." Papa said that the oil and gas industry had helped to write Act 13, which was passed under former Gov. Tom Corbett's administration.

While the oil and gas industry has been "pushing hard on municipalities," he said, the court "went out of its way" to say municipalities are not going to be in trouble by putting restrictions on the industry.

But now, Papa said, "The court made it very clear that municipalities can be as restrictive as they want" in determining where oil and gas drilling can be located.

Another local attorney who is happy with the decision is Louis Perrotta. He has been involved in local fracking issues in his capacity as solicitor for  Mahoning Township, which has permitted several wellpads and a compressor station, as well as Wilmington Township which is preparing a gas and oil ordinance and Shenango Township which is considering one.

He said Wednesday that court's action "marks a victory for municipalities across Pennsylvania who as a result of the decision, have regained autonomy in the review process for local ordinances concerning oil and gas development." He added the decision "obligates the industry and our local community to work together in promoting Pennsylvania's economic interests as well as indispensable rights guaranteed under the Pennsylvania and United State Constitutions."

CAUSE, a local group seeking to protect residents' interests in the formulation of an oil and gas ordinance in Wilmington Township also lauded the decision.

"Thankfully, elected officials need no longer fear that impact fees from unconventional gas development might be withheld, now that the Supreme Court has overturned the Public Utility Commission's ability to withhold funds if they deemed an oil and gas ordinance to be too restrictive," said Carrie Hahn Wednesday on behalf of the group.

She added that the decision also reinforces the "right and duty" of local officials to keep oil and gas drilling in appropriate land use districts, as well as supporting CAUSE's position that "unconventional gas drilling is an industrial process and should only be permitted in industrial zones."

However, a spokesperson for the Pittsburgh-based Marcellus Shale Commission saw it differently.

David Spigelmyer president of the shale development trade association, said in a statement to The News Wednesday, "We're disappointed in aspects of the court's ruling which will make investing and growing jobs in the Commonwealth more - not less - difficult without realizing any environmental or public safety benefits."

"Despite this ruling," he added, "our industry remains deeply committed to adhering to the high bar set by Act 13, a common sense bipartisan law that modernized our oil and natural gas regulatory framework and serves as a national model for other states."