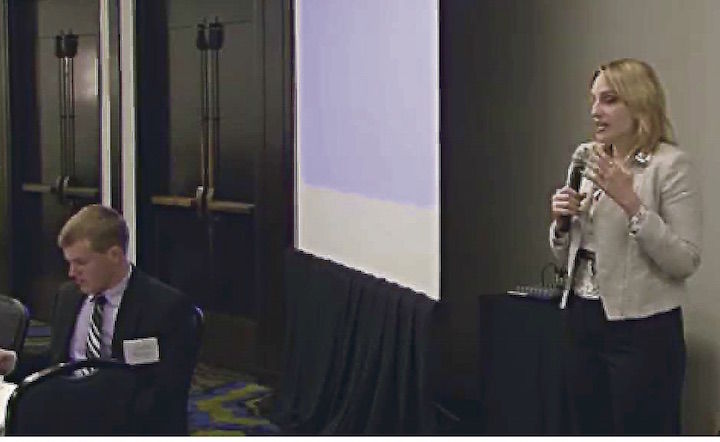 Ciarra Karnes shares her story of being homeless at the Homeless Education Network's V Summit. 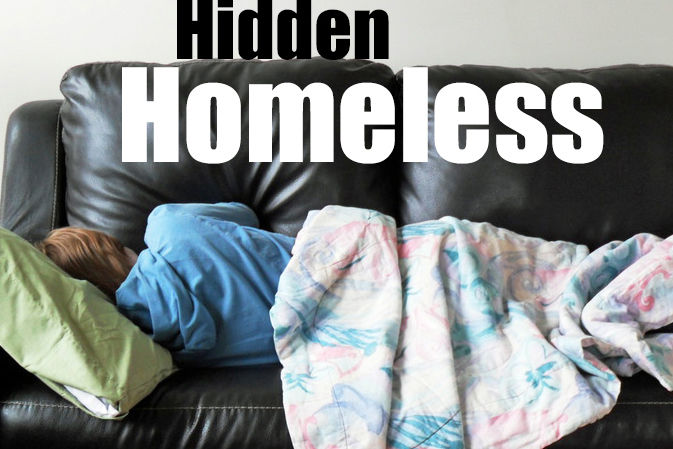 Ciarra Karnes shares her story of being homeless at the Homeless Education Network's V Summit.

A pile of black garbage bags slumped over the curb. Drops of rainwater sped down the sides and pooled around them.

Tossed carelessly at the side of the road in a rainstorm, these bags contained nearly all of Ciarra Karnes' earthly possessions, including items from her childhood home she shared with her grandmother.

And though the belongings were meager, they also were the only evidence to prove that the 17-year-old had ever been anything other than a homeless girl who felt worthless.

"That was my entire life, in trash bags on the street," recalled the former Shenango resident who now works in Pittsburgh as a therapist for middle school students who have experienced trauma. "A lot of it was broken, from being thrown in there, and then it rained, and so even more of it was ruined.

"That's a harsh reality — it just doesn't make you feel good, when you're already questioning yourself and your worth as a teenager. It just adds to it."

Karnes admits that the pain of family trauma and being an unaccompanied homeless youth could have 'clipped her wings' and 'kept her from flying', as author William Paul Young has written. But with the help of a school counselor and others along the way who believed in her, the 24-year-old is soaring.

Ida Duncan, Karnes' paternal grandmother, began caring for her when she was five years old because her parents were "going through their own issues" related to drug and alcohol addiction. The two lived together in a Shenango Township apartment for senior citizens, and Karnes recalls having groups of "old ladies" at her childhood birthday parties.

"It was a really different experience than some kids had, but it was wonderful," Karnes said. "But when I was 16, she actually fell and broke her hip and my uncle decided to put her in a nursing home ... and that meant I had to find another place to live."

Then an 11th-grade student at Shenango High School, Karnes was afraid she would have to switch schools, or worse, that she wouldn't be able to complete high school. But she began staying with a friend's family, and her guidance counselor, Joe McCormick, recognized that, as a homeless unaccompanied youth, she was protected under the federal McKinney-Vento Act, which guarantees children have the right to attend their original school when they become homeless.

"He worked diligently to try to find a way for me to stay at the school," Karnes said. "He knew a lot about my life and everything I had experienced. He was an incredible guidance counselor."

McCormick, who is now the school's principal, said Karnes is a strong example of the kind of student for whom the law was enacted.

"I remember her still trying to pursue going to school, and seeking out higher education; she didn't want to live the same life as her family and other people in her life," McCormick said. "She needed support in doing that, and we were able to help connect her with the resources she needed so she could continue her education and make a future for herself."

Despite the help she began receiving, Karnes said she was embarrassed that she was homeless.

For about a year, Karnes stayed with her friend's family, but when tensions grew between her and the parents, she was kicked out. When she returned to the house to collect her belongings, that's when Karnes found everything on the curb in trash bags.

Feeling rejected and worthless, Karnes said she returned to an old family friend, who offered to take over guardianship of her. When they appeared in court to make it official, Karnes said her mother "didn't even bother to show up," so the woman was granted custody. And though Karnes now had a "home" once again, this relationship, too, was troubled.

Within months, she began "couch surfing" — sleeping at other friends' homes — and other times, living in her car.

While Karnes admits she had a "rebellious teenager streak," she said she avoided using drugs and alcohol to quell the pain she was experiencing. Instead, she said she pursued a unhealthy relationship with a man who continually took advantage of her.

"The last time I saw him, he raped me in my car, which was my home," she said. "I thought he was the only person who cared about me, and that's how it ended. But the worst part was that I thought it was my fault, that I had done something wrong in that situation.

"I considered ending my life at that point; I had no one telling me I wasn't those things except for Mr. McCormick and two other teachers," she said. "Even one family who let me stay on a cot in my friend's room — I didn't feel like I deserved how kind they were being to me. I just kept going deeper into my spiral of unworthiness."

In the midst of these troubling circumstances, at the urging of McCormick, Karnes still managed to apply to college at Slippery Rock University and to the Horatio Alger Association Scholarship, a national need-based scholarship that is granted annually to students who have "succeeded in spite of adversity," according to the organization's website.

Karnes said she returned to the house of the woman who had custody of her one afternoon to collect her mail, and she found an opened envelope from SRU on the table. She said the woman began insulting her, in spite of the acceptance letter she had received.

"When I got that acceptance letter, that's the first moment I remember saying to myself that I won't let someone who doesn't care about me talk to me that way and to believe them," Karnes said. "What's the point of that?"

Soon after, she learned she had been awarded the Horatio Alger scholarship.

"Out of about 44,000 kids who applied, they picked two or three kids per state, and I was one of them," Karnes said smiling, her pride still evident years later. "That never would've happened if not for Mr. McCormick."

She also attributes those successes to her grandmother, who helped her to understand how important education was.

"She taught me that education was the key to me being able to accomplish more in my life, but she also helped me to understand that I should never forget where I came from and what I went through and what I experienced," Karnes said. "But the difference was that I should never let it hold me back from who I wanted to be."

Karnes graduated from Shenango High School in 2009, and went on to attend Slippery Rock University, where she pursued a bachelor's degree in psychology, with minors in women's studies and nonprofit leadership. She graduated in 2013, and then went on to earn a master's degree in counseling from Chatham University the next year.

Karnes said that her journey through higher education wasn't always easy. She said she had to have McCormick sign papers for her when she needed parents' signatures. During breaks in classes, she always had to search for some place to stay because she did not have a permanent residence.

She even recalled taking a class with a professor who perpetuated stereotypes of homeless individuals, even after Karnes shared her own story with her.

But she also found her voice.

Karnes began volunteering at homeless shelters and gave speeches on campus and in other venues to raise awareness of homelessness. She organized an effort to raise funds and make fleece blankets to distribute to the homeless in the surrounding area. She appeared in a feature story in the college's student newspaper.

"In all my speeches, I always told people that the most important thing is to ask people (who are homeless) and treat them like a person. Don't look through them," Karnes said. "If people would've asked me what it was like to be homeless and how I felt, it would've been different.

"All it takes it to literally reach out your hand — that's all it takes to make a difference in someone's life," she continued. "If I can be the face and give voice to others' experiences and to take those questions about homelessness ... let me do that. I want to help with the ignorance and challenge people's beliefs about what it means to be homeless. I can do that now."

But Karnes still says she would've never imagined herself where she is today, though her grandmother had dreams for her.

Ida Duncan witnessed two of those events, Karnes said, before she passed away in 2013.

"She was really proud of me, and I knew she loved me," she said. "I never questioned my grandma's love, and everybody deserves to have a person like that in their lives.

"Life has had its ups and downs for sure," Karnes continued. "When you're faced with trauma and adversity, there's a lot of downs all the time, but now I'm at a point where I have more up days than down, and I can get out of those downs a lot quicker.

"The trauma and adversity is never going to go away, but I don't let it control me."

Jessica Shelenberger is a former feature writer, city editor and assistant editor for The News. She taught writing and journalism courses at Westminster College.