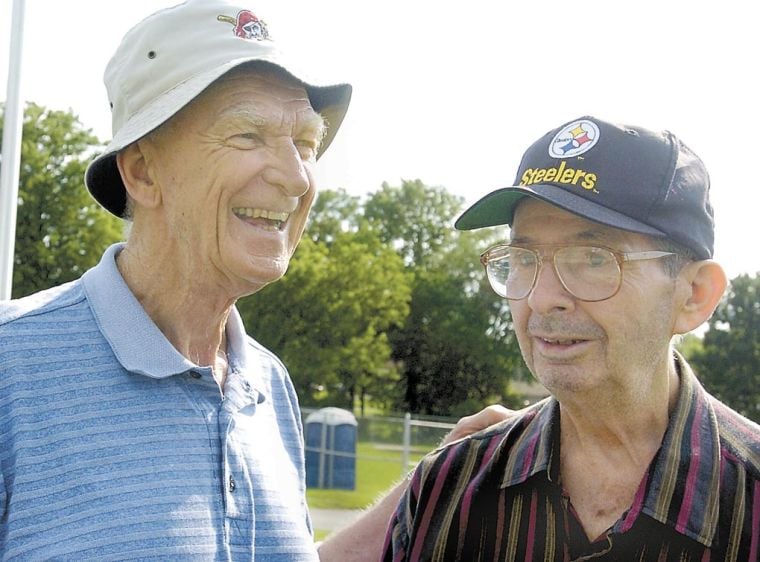 Chuck Tanner, left, reminisces with Anthony Morrone about playing football together for Shenango High School.Tanner and Morrone were neighbors growing up. — Erica Mihok/NEWS 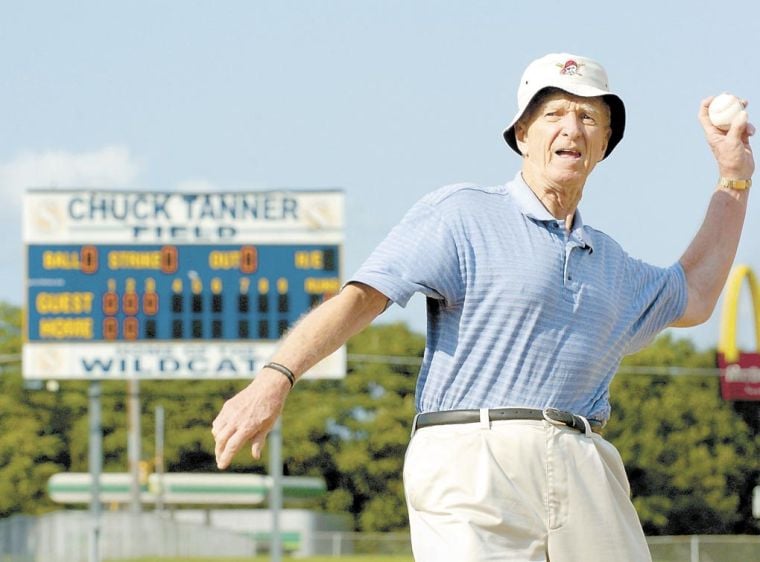 Chuck Tanner throws out the first pitch before an American Legion game between Shenango and Neshannock. — Erica Mihok/NEWS 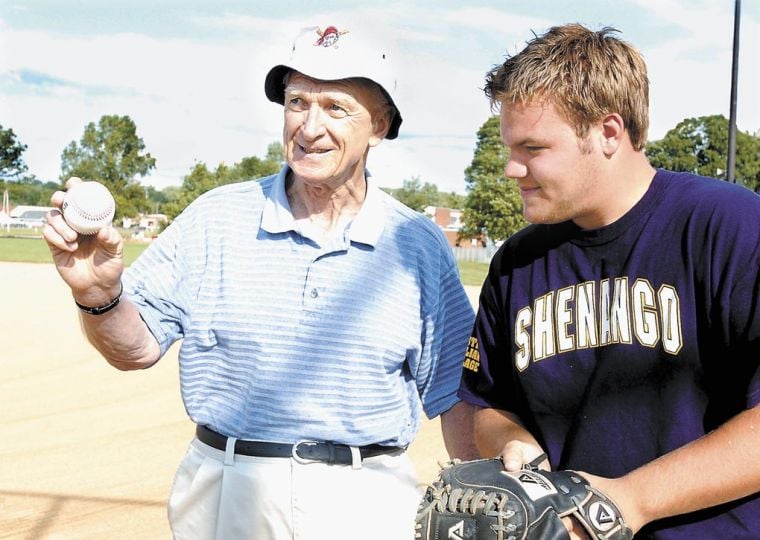 Chuck Tanner, left, reminisces with Anthony Morrone about playing football together for Shenango High School.Tanner and Morrone were neighbors growing up. — Erica Mihok/NEWS

Chuck Tanner throws out the first pitch before an American Legion game between Shenango and Neshannock. — Erica Mihok/NEWS

Chuck Tanner wasn’t going to the mound without warming up. The Neshannock Township resident and former manager of the Pittsburgh Pirates joked as dozens of spectators watched the Shenango High product prepare to throw out the first pitch before an American Legion game between Shenango and Neshannock yesterday. “You’ve got to make sure you’re loose,” Tanner preached from the sideline. Prior to the first pitch, Tanner was honored in a ceremony at Chuck Tanner Field next to Shenango High School for the placing of a four-sided monument and completion of the area around the pillar honoring all of Tanner’s achievements. The brainchild of Frank Augustine, who got a committee together in 2003, campaigned and dedicated the field in 2004. The committee, however, wanted to do more to honor Tanner and decided to place the monument behind home plate toward the third base side. Steve Banko, whose father Michael Banko Jr., helped Augustine organize the committee, caught the first pitch. Michael passed away during the early stages of the project. “The whole key was finishing up the bricks,” Augustine said. “Once we finished, we knew we had to get an American Legion baseball game. We looked at the schedule and knew we had to have this when Neshannock played Shenango, because Chuck went to Shenango and his kids went to Neshannock. Then his birthday was yesterday (Tuesday) and the All-Star Game is next week. It really tied everything in.” The black-and gold four-sided Dakota granite pillar with a baseball on top is placed in a diamond-like area. Surrounded by personalized bricks, which were purchased to raise money for the complete field renovation over the past three years, the area is a shrine to the 1946 graduate of Shenango. “This is one of the nicest things that has ever happened to me,” said Tanner, who turned 77 on July 4. “It’s fantastic, especially with the people. It was hard work to do this. For them to do that statue alone and naming the field, is just a great honor, and I’m really proud of it.” The 5-foot, 4200-pound monument presents four aspects of Tanner’s achievements — one as a major league player, one as a big-league manager, one with everything he accomplished while in high school and the other with his image engraved atop the skipper’s most noted quote: “The most important thing one must do to be successful is never quit. The second most important thing one must do to be successful is never quit. But the most important thing of all is never quit!” “We didn’t want something that looked like a tombstone,” Augustine said. “We decided to go with (the four-sided pillar) and would have each side say something about Chuck. We figured this would be the best way to honor him.” The fact that the ceremony was held before an American Legion game was only fitting, considering Tanner played baseball for his local post as a youth. “We played for Post 343,” Tanner explained. “See, Shenango didn’t have a baseball team. I played football, basketball and track there. We didn’t have enough money to buy uniforms, and that’s why we had to play for the Legion team. We had all the kids from the county play here.” Presently serving as a scout for the Cleveland Indians, Tanner has not managed in the majors since 1988 when he was with the Atlanta Braves. He, however, will be back on the bench for Phil Garner’s National League squad during the 77th All-Star Game on Tuesday. “Phil Garner got the commissioner’s (Bud Selig) permission, so I’ll be a coach,” Tanner said. “After all the years, he played for me and we won a World Series, so for him to remember me — — to go through everything to get the OK, that’s amazing. I’ve been to six of them, and this one is going to be exciting.” Personalized bricks With 180 personalized bricks surrounding the Chuck Tanner Monument, more than 200 are available to purchase at a cost of $100. For more information, contact the administration office at Shenango High School at (724) 658-5537.