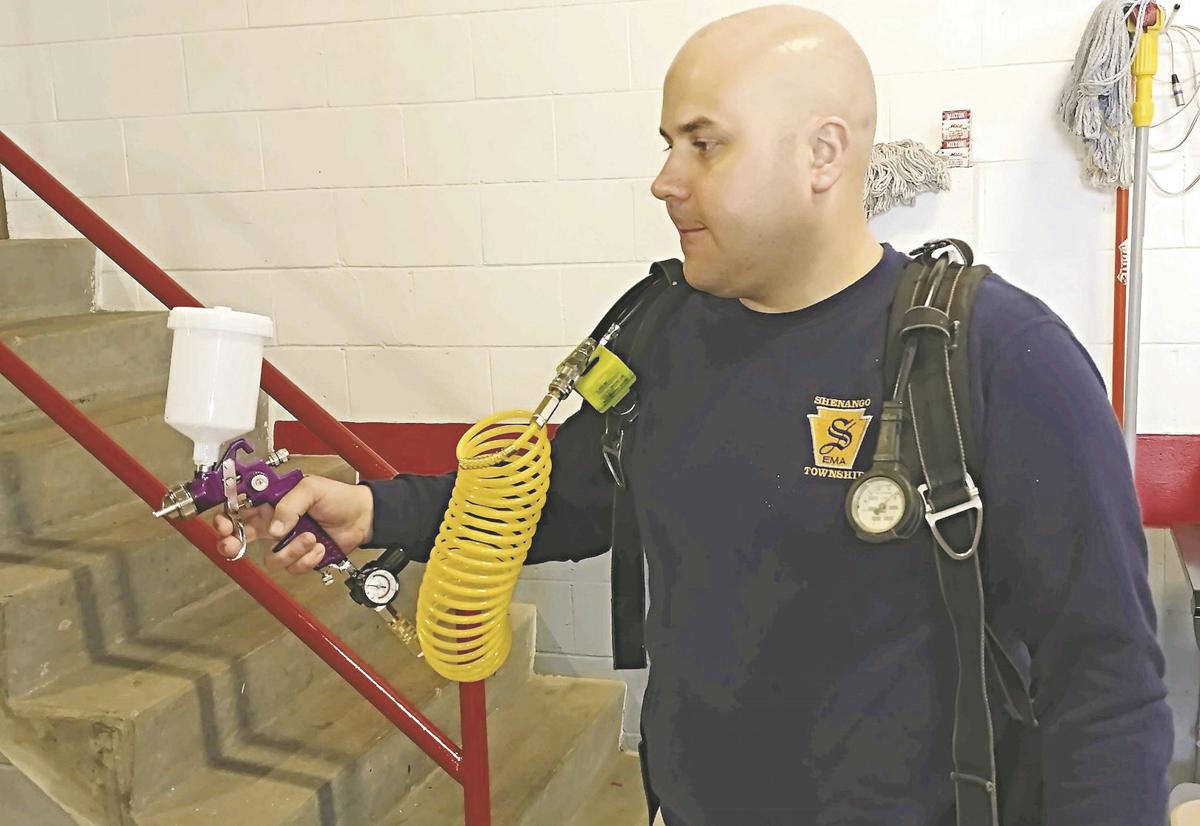 Shenango firefighter Justin Data demonstrates one of the fire department’s devised disinfectant sprayers being used by local emergency units and the Lawrence County Housing Authority during the coronavirus threat. 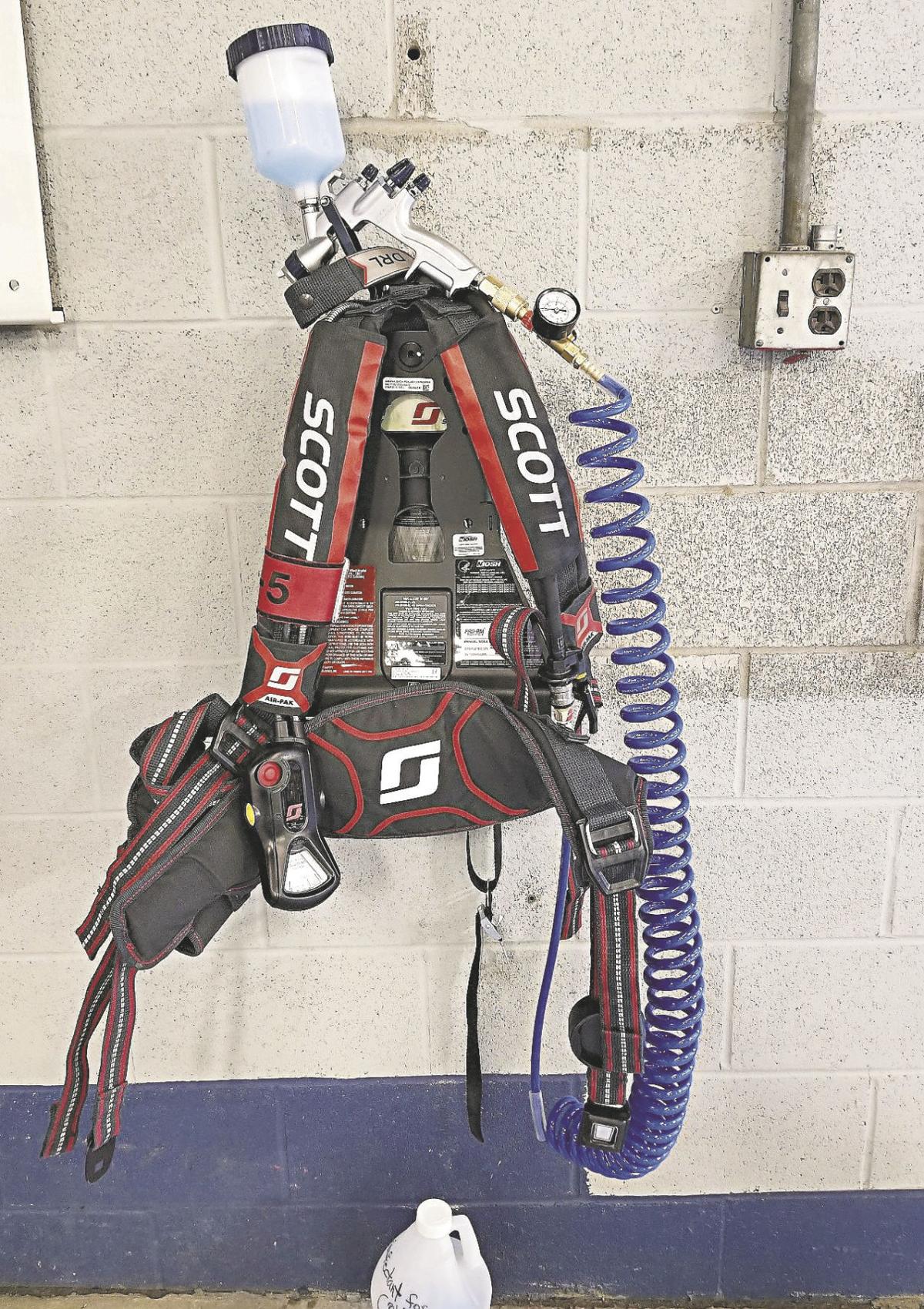 This photo shows a disinfectant sprayer devised by the New Castle Fire Department to spray vehicles, equipment and places of large populations of people.

Shenango firefighter Justin Data demonstrates one of the fire department’s devised disinfectant sprayers being used by local emergency units and the Lawrence County Housing Authority during the coronavirus threat.

This photo shows a disinfectant sprayer devised by the New Castle Fire Department to spray vehicles, equipment and places of large populations of people.

An innovative way of spray sanitizing is being put to good use by local emergency departments and Lawrence County Housing Authority apartment units during the coronavirus epidemic.

They have the Shenango Area Fire District and the New Castle Fire Department to thank for the extra layers of protection, using the devices they built that are being used to disinfect surroundings.

The idea came to assistant Shenango chief Brandon Rishel, who saw on the television news that another fire department in the Pittsburgh area had retrofitted paint sprayers into disinfectant sprayers.

“Another fire department was using one, and I copied their idea,” Rishel said.

The two departments bought some paint sprayers, got the air chucks out of their used and expired department air packs and assembled them. To date, they have made about 20 of the sprayers. Rishel made at least eight of them.

“It’s a virucide and fungicide that we dilute with water,” he said. “We use it as aerosol and it kills anything it come in contact with. It’s pretty neat stuff.”

“Primarily they’re for emergency services for municipalities,” Rishel said of the sprayers. “But we were brainstorming about where using them would have the most impact, and we brought the housing authority into it because you can impact the most people with one sprayer.”

He noted that the city fire department is filling all the air cylinders and the Housing Authority is going into its housing buildings and spraying them down.

“Were not making or giving them for a profit,” Rishel said of the sprayers. “We’re trying to give them to places where it will impact the most people.”

His father, Shenango fire chief David B. Rishel, said the fire department is using the sprayers to disinfect its trucks after it responds to incidents.

The housing authority bought more paint sprayers to give back to the fire department so it can make more of them, Brandon Rishel said.

“The air packs we’re using are those that are out of service,” he emphasized. “They all have a life expectancy, and they are all expired, and the fire departments already have replaced them with new ones. We’re not taking equipment out of service.”

Kobbe commented, “We wanted to try to help push these sprayers out there to disinfect and protect as many people as we can.”

He said that Rishel built one sprayer for Shenango’s department, then the New Castle Fire Department copied it and built three of them. Kobbe went out and bought 10 more paint sprayers and retrofitted them, and some were donated by the police.

“They’re gravity-fed paint sprayers,” Kobbe explained. “We have to buy a special air chuck that fits into special disconnects on our air packs. We got as many used air packs as we could.”

He said the housing authority is using the sprayers to disinfect hand rails, elevator controls, door knobs and all of the touch points in its buildings.

“They gave us four of them,” said Gene DiGennaro, housing authority executive director, and the agency went out and bought the equipment for the fire department to make four more units.

“We started using them Friday,” he said, noting that the authority previously had bought some disinfectant sprayers of its own that were battery operated. “We’re spraying the high-rises daily in the lobby areas and any surfaces that people touch.”

He added that the authority is out of masks now, and the workers are using respirators. The authority bought six or seven cases of sanitizer for the spraying, he added.

“If we could get masks, that would be a good help for the guys,” he said.