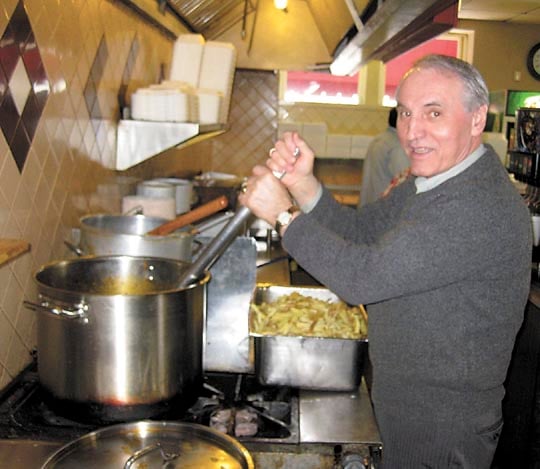 John Katsadas stirs the pot at the Red Hot Restaurant in Ellwood City. The businessman/benefactor has made food and monteary donations to several organizations and needy individuals. 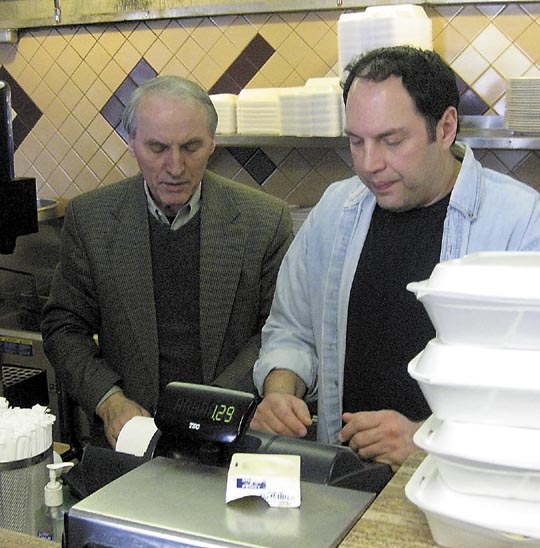 John Katsadas and his oldest son, Paul, work together at the Red Hot Restaurant in Ellwood City. Katsadas is known for his hot dogs and sauce, but also for his charitable acts.

John Katsadas stirs the pot at the Red Hot Restaurant in Ellwood City. The businessman/benefactor has made food and monteary donations to several organizations and needy individuals.

John Katsadas and his oldest son, Paul, work together at the Red Hot Restaurant in Ellwood City. Katsadas is known for his hot dogs and sauce, but also for his charitable acts.

John Katsadas prefers to keep the many plaques and letters of appreciation out of view.

Some are stored in drawers and cabinets in a small office in the back of his popular Red Hot Restaurant in Ellwood City. Others occupy similar spaces at home.

Katsadas, 71, feels somewhat embarrassed when community leaders and area organizations honor him for doing what he loves to do.

Known for his tasty hot dogs and tangy sauce, Katsadas also has an unquenchable appetite to help others with food or monetary donations. Simply put, Hot Dog John has a hunger to do good.

Katsadas came to Lawrence County almost a half century ago, and the area has been better for it ever since.

He has empathy for anyone in need. He’s fed the homeless and even found shelter for them.

Growing up poor in northern Greece, food and clothing were in short supply so Katsadas knew what it was like to be hungry.

“We moved a lot,” said Katsadas, who put down roots here 46 years ago and has never left.

Katsadas began as an employee at Coney Island in New Castle. He left in 1969 and joined his late brother Tom in opening their own restaurant in Ellwood City. Success came quickly and it wasn’t long until they opened Red Hot Restaurants in New Castle, Rochester, Zelienople, Sharon and Erie. Over the years, the other stores were sold. Only the original remains in the Katsadas family.

Although consumed by work, Katsadas was never motivated by money. In fact, he believes the best thing about having money is being able to give it away.

“I know what it’s like to have nothing,” Katsadas said. “It feels good to be able to help others.”

The Salvation Army, March of Dimes, Crisis Shelter of Lawrence County, Relay for Life, fire departments, service clubs, high school clubs and the Ellwood Area Historical Society are among those who have benefited from Katsadas’ generosity.

He once cooked hot dogs for 2,000 in Ellwood City. People were bused to Ewing Park for the event.

Mayor Anthony J. Court has known Katsadas since he was in high school.

“I can always count on John,” Court said. “Every time I’ve gone to him for something, he comes through.”

Court said Katsadas is always quick to step up and feed the volunteers during special clean-up days in the borough.

They’ve been together for 46 years, raising four children and now enjoying five grandchildren.

“We’re more in love today than ever,” Katsadas said.

Katsadas was driven by a desire to provide for his family. Being able to send his children to college an education was very important to him.

Paul, who helps his father run the restaurant, attended Youngstown State University. Niki graduated from Duquesne and works as a psychologist. Thomas graduated from Pitt and is a chiropractor in Dallas. Billy graduated from Robert Morris and is a pilot.

Niki said her father is a remarkable, self-made man who never forgot what was important to him. She said all the siblings have benefited from the work ethic they inherited.

Katsadas is not sure if he’s given away more hot dogs than he’s sold in recent years, but it might be close.

Last week, he sent 300 hots dogs, buns and chili to back a project at Lincoln High School.

The Red Hot Restaurant has been at current location on Sixth Street for 17 years since moving from its original location on the other side of the bridge.

“It was scary to pick up and move across town after we’d had been in one spot for 25 years.” said Paul, 45, who has helped his father run the restaurant for two decades. “We weren’t sure what would happen, but business actually got better.”

“Dad was so consumed with running the restaurant that he couldn’t stay away, no matter how sick he might be. He never missed a day,” said Paul. “He never wanted to close, not even on holidays. He believed that if you close, your customers might never come back.

“I tried to tell him that nobody eats hot dogs on Easter!

“My brothers and I would go golfing every once in a while, but dad never had a hobby. It was always work,” Paul said. “Sometimes he let the restaurant run him instead of the other way around,” said Paul.

Katsadas still gets up around 6:30 a.m. every day and arrives at the restaurant by 7:30 to begin preparations for another day of making and selling sauce.

The only secret to his concoction that he’s willing to divulge: “You have to use the good stuff if you want the outcome to be good.”

GOING OUT OF HIS WAY

Paul worries that people will take advantage of his father’s kindness. “I know he will go out of his way to help whoever he can.”

When Katsadas was in Dallas for his son Tom’s wedding in 2007, he went to breakfast at Denny’s and noticed a man on the street who had no legs. His body began at the waist and the man used his hands to push himself along in a special wagon. Katsadas got up and went outside to meet the man and buy him breakfast.

“When he sees someone is hurting, he gets involved,” Paul said. “He asks them where they live, and some of them don’t have homes so he makes calls to find them a place to stay.”

Like most people, Katsadas dreams of winning the lottery, but his desire is different from most.

“I’d like to win just so I could give it to people who need it.”