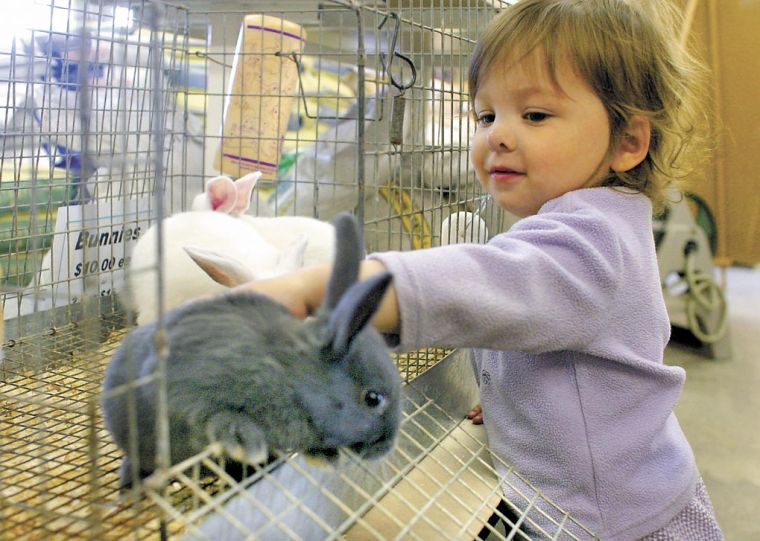 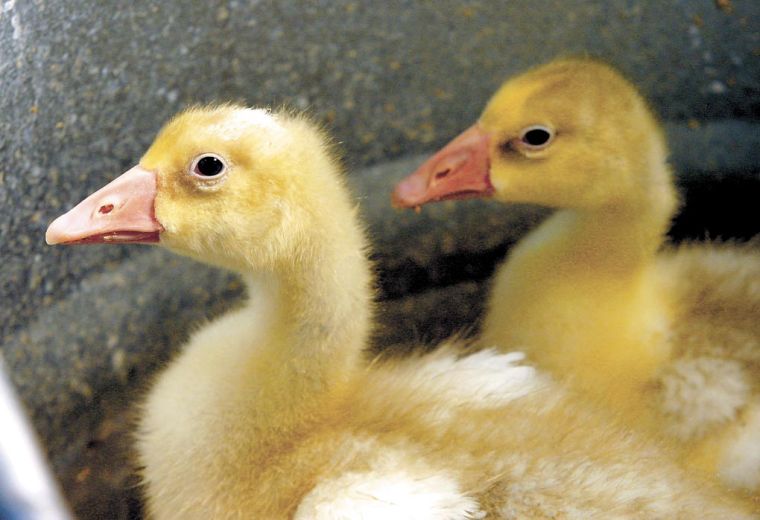 Green acres is more than a 1960s situation comedy. It’s also the verdant land owned by Alex Mijavec that yields wonderful produce and is a multi-faceted environment. And this is not a maternity ward, but there are always babies around. Spring means birth and all kinds of living things appeared on the premises of Mijavec Feed and Supply in Pulaski Township. Besides feathered and furry friends, the greenhouse was opening, onion sets and other veggies had arrived and this was a busy place for employees and early growers. At the store, everything from 50 pounds of bird sunflower seed to livestock needs to dog and cat supplies and blocks of salt are sold. And those hefty packages are carried out for customers. But all around, there’s a sense of creation, whether it is bursts of growth from the earth or a peep hatching from an egg. In a cage, a white bunny crawled atop a gray bunny and cuddled in closely. Soon all four occupants awoke and the rabbit antics began. Nearby, in a large aluminum tub with a heat lamp, three web-footed, five-week-old goslings were alert but camera shy. “They’ll follow me around like Mother Goose, though,” said store manager Samantha Frketich, who has been chased more than once. Reigning over this emporium of farm, garden and animal concerns is the amiable Alex, who is the third generation of Mijavecs to carry on rural traditions. His grandparents operated a dairy farm in the 1930s and as a young boy, Alex worked on the farm. He later joined his dad, who farmed, in selling equipment. “We evolved and changed with the times,” he said. “We listen to what people want and need and go with that.” Most people who venture in are known by their first names. At the counter, Samantha called out, “She needs a 10-pound bag of ear corn.” That’s for squirrels. Capable and knowledge, Samantha loves the outdoors and animals. I followed her to the barn that was rebuilt after it burned in 1980. The original stone from the early 1930s remains. About 40 bunnies in assorted colors were in various stages of play and rest, and some have names such as Freckles and Angel. Samantha pointed to two Flemish Giant rabbits, and the female’s moniker is Iris. Seven-week-old babies scampered down an invisible bunny trail, nuzzled or napped. “We’re hoping they’ll breed. They’re full blooded.” This is certainly a kid-friendly place and there are plans for a small petting zoo, which would include rabbits, goats, sheep and a llama. At Easter time, nearly 45 ducks and 200 chicks were sold. “They hatch all summer long until mid-July,” Samantha said, adding they have bunnies year long and also get pheasants. The first batch of baby turkeys was shipped in April 5 and the bunnies are born on site. “The animals draw kids in,” Alex said. He raises about 35 acres of sweet corn planted in April and first harvested in July, and about three acres of Indian corn. Altogether, the farm has 100 acres. The Amish also provide a full line of produce including tomatoes, peppers and watermelon. By July, locally grown and Georgia-raised peaches are sold, and if you drive or stop by in the fall, you’ll see “tons” of pumpkins and cornstalks. Before I left, Alex noted one of the highest points in Lawrence County is nearby on Route 422. If it’s hopping, chirping or sprouting, chances are good you’re at Mijavec’s. Plant, feed and grow. That’s what they know.

James Harding Jr., originally from New Castle, passed away on Jan. 18, 2021. He was preceded in death by his wife, Marilyn. He'll sadly be missed by family and friends.