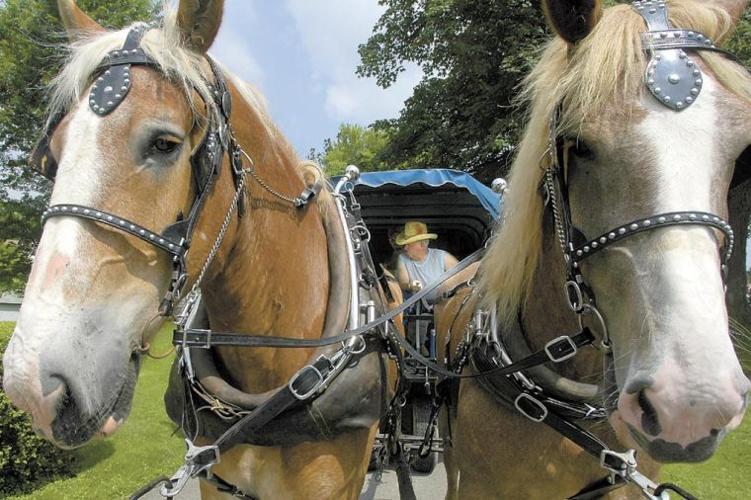 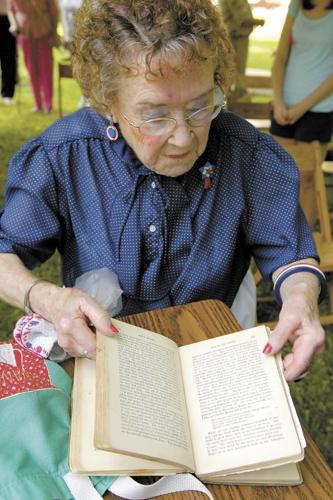 Mary Alice Kraig, 93, shows a poem she memorizzed when she was a child. Mary Alice recited the poem from memory to a crowd during the Enon Valley community day festivities, July 15. — Denny Henry/ NEWS

Mary Alice Kraig, 93, shows a poem she memorizzed when she was a child. Mary Alice recited the poem from memory to a crowd during the Enon Valley community day festivities, July 15. — Denny Henry/ NEWS

In Lawrence County, community events don’t come much quirkier than Enon Valley Community Day. But it’s a good kind of quirky. There was something to interest most everyone at the 30th annual event Saturday, from merchants selling knickknacks to birds of prey to poetry readings to magic. At the borough fire hall, Don Moody asked his young assistant to pick a card out of his deck. The magician then pulled out an insurance policy, explaining he has a policy in case a trick doesn’t work. Although it seemed the ins and outs of insurance were lost on the girl, she looked delighted when the policy turned out to be a giant version of the card she had pulled from the deck. Nearby, a giant inflatable wave-shaped balloon was blown up for children to jump around in. Inside, a surfboard, not unlike a mechanical bull, was set up for them to ride and see how long they could stay one. “Tiffany, come watch Rachel get embarrassed,” one youngster called out. Under the shade of a maple tree, Earl Shriver of Economy talked to people about some of the birds he had at the event. Shriver and the birds of prey he breeds looked comfortable out of the hot sun, although the nest of robins that normally hang out in the tree seemed to be a little nervous to be sharing their space with four falcons and a hawk. “Those are some upset robins up there,” he noted. Inside the municipal building, a chili contest — with the winner selected by the public’s votes — was taking place. Rock Lewis of New Middleton, Ohio, loomed over nine crock pots of chili like a hawk. He paced back and forth before finally casting his vote. He picked number five, he said, because “it reminded me of my grandma’s chili.” However, he added his grandmother “didn’t make chili, but if she did, I’d like to think it tasted something like this.” Lewis was visiting Cecelia Lindner. She said her family was having a reunion to coincide with the community day. Christina Sutton also took advantage of the day, setting up a garage sale at her home near the event. Back at the municipal building, Little Beaver native Mary Alice Kraig performed “Kentucky Belle” from memory. The poem, written by Constance Fenimore Woolson, takes place during the Civil War. Kraig, who will turn 94 next month, was clear and animated as she recited, speaking over a pickup basketball game and a train that whistled through town. “It’s always been easy for me to learn poetry,” said Kraig, who has performed the poem for 80 years. The activities then moved to hog-calling, with four female and 10 male competitors. Among the men, Tom Herb was named top hog caller, besting last year’s champ, Lawrence County Commissioner Ed Fosnaught. In the female bracket, Michelle Hudak got top honors. Proving hog-calling isn’t a male-dominated competition, she beat Herb in the finals. For their efforts, each received a trophy — a pig carved out of wood. “This is my third year hog-calling and the first time I won,” Hudak said, joking she had been robbed the first two years. As the afternoon rolled on, people began to shift to the other side of town to watch the truck-pulling event, which was dedicated to the memory of Al Reisinger, who used to put it together. The crowd of about 100 cheered as pickup trucks pulled semis loaded with concrete well past 100 feet. In Enon Valley, the day was just beginning.