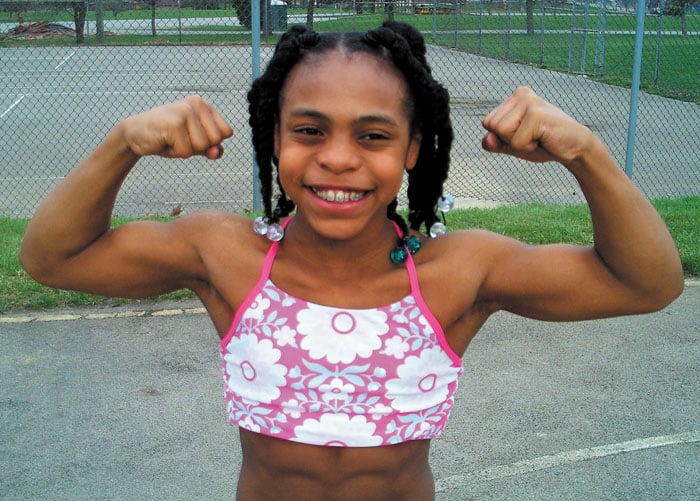 Genetics are responsible for Mikala Henry’s sculpted appearance. In addition to an active childhood, Mikala eats food that good for her. 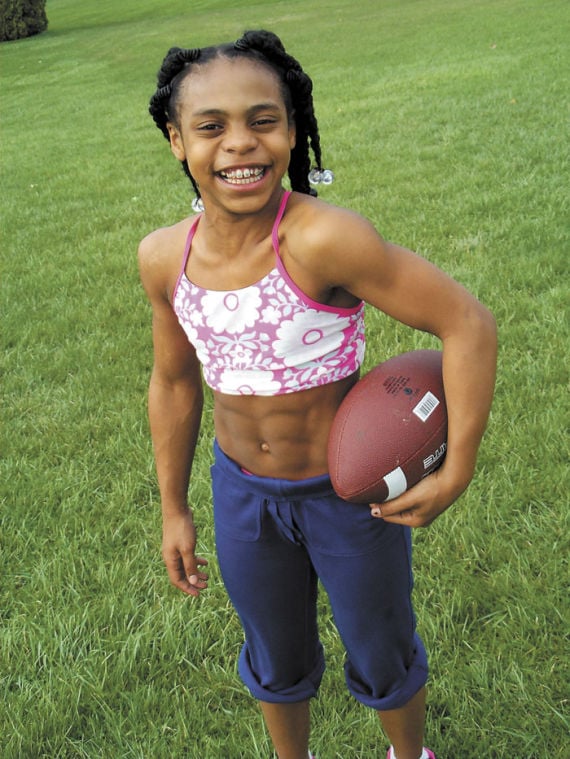 Eleven-year-old Mikala Henry, a sixth-grader, found herself in the spotlight when she attended the 2010 Arnold Sports Festival in Columbus, Ohio.

Genetics are responsible for Mikala Henry’s sculpted appearance. In addition to an active childhood, Mikala eats food that good for her.

Eleven-year-old Mikala Henry, a sixth-grader, found herself in the spotlight when she attended the 2010 Arnold Sports Festival in Columbus, Ohio.

A New Castle youth’s physique has amazed bodybuilders, fitness experts, classmates and, well, pretty much anyone who sees her.

Genetics are responsible for 11-year-old Mikala Henry’s build — a sculpted appearance that others spend years in the gym to obtain.

Mikala’s impromptu appearance at an international sports festival generated a stir and led to an article in a national women’s fitness magazine. However, the sixth-grader wants to turn the attention from herself and focus on battling childhood obesity while promoting healthy lifestyles.

The child’s arrival gave a hint of what was ahead.

“You could see she was muscular. She sat up (on my stomach) and looked like she was flexing,” Charmagne said. “She was born to be an active child.”

People asked Mikala’s parents early on if she worked out.

“Work out? She’s too young,” Alton said. “(My wife and) I were like that, too. Never touched a weight and was in excellent shape.”

“As the years went on, I just got used to it,” Charmagne added.

A trip to Columbus, Ohio, in March placed the George Washington Intermediate Elementary student in an unexpected spotlight. Mikala was there to participate in the gymnastics portion of the 2010 Arnold Sports Festival.

The four-day event is named after famed bodybuilder, actor and California Gov. Arnold Schwarzenegger. The festival, started in 1989, features 44 events.

“I thought Mikala needs to be here,” she said. “I knew she’d fit right in.”

As the family entered the area, Mikala found people converging on her.

“The paparazzi came out of the woodwork,” Charmagne said. “They thought she was a bodybuilder.

“It was just crazy.”

A number of male and female bodybuilders, such as Lou Ferrigno (who played television’s “The Incredible Hulk”), Toney Freeman and Denise Masino approached and posed with the youngster.

“That was amazing. I was excited,” Mikala said.

Robert Kennedy, a bodybuilding guru and magazine publisher, also met the youngster. He profiled her in the July edition of “Oxygen.”

While she enjoys the attention, Mikala said she is concerned about the health of her classmates. She defies the common notion that children dislike healthy food.

“You are what you eat, and that’s how I raised them,” Charmagne said.

Mikala enjoys broccoli — cooked and raw — and eats fruits, vegetables and beans in addition to baked fish and chicken.

“I saw these kids who were obese, and I felt sorry for them,” she said. “I wanted to help them eat right and exercise.

“They can have diabetes, high blood pressure and heart attacks.”

To help others, she is creating Internet videos that focus on exercise and nutrition. Her family is working on a series called “Healthy Choices with Little Mikala.” Her website is http://littlemikala.weebly.com/.

Marie A. Wiley, 97 of Shenango Township, died Thursday, April 2, 2020, at Golden Hills Nursing Home. Private services will be held. Complete obituary may be viewed at marshallsfh.com.